Nope, i have never visited that site

Ah, that makes sense. I already knew 하루살이 as an insect, but didn’t know the extra meaning.
I learned this word while watching a gameshow with k-pop idols. They were playing a guess the word game and one of them was Japanese so he didn’t understand this word, so that’s why I learned it and remembered it

I’ve been browsing a few times on the site, but I feel too shy to contact someone

You seem to have a good grasp of the Korean language, why not challenge yourself? As you probably know already, the best way to improve speaking skills of any foreign language is by actually practicing with a conversation partner. Just curious, would you be more willing to practice with someone you are somewhat familiar with (for instance, someone from the Viki community) than a complete stranger?

The thing with writing is that I have the time to think and can change wording and stuff before sending it in the world. When speaking that’s not possible. I’ve had some conversations in a foreign language and I noticed that I can understand quite well, but I’m not very good at speaking ‘on the spot’. Practising with someone from Viki could be nice, however once I have enough courage talking with a stranger isn’t too bad either

Is it true that ‘‘menu’’ in Korean is referred as to a ‘‘dish?’’ I think this is so wrong, and for all the right reasons. If they’re using a word that is called ‘‘loanword’’ or ''Konglish? (which it seems not to apply here since there is no change in the written word) Why not familiarize themselves with its true meaning in English, and apply it accordingly? Menu is not one dish or several dishes. Menu is
Excerpt: wikipedia
In a restaurant, the menu is a list of food and beverages offered to customers and the prices. A menu presents a list of options/dishes/beverages/drinks; from which customers can choose to consume/eat.

A Menu is not a dish, but the description of the different dishes/drinks offered at the Restaurant. In some cases it even includes the price next to them.

oriya
Because there was a show in which someone was offered the chance to make a new menu and he ended up making a new dish.

I saw that word used in several other Asian dramas where cooking/Chef was the theme of the story, and they used the word menu, but never using it correctly, but describing the new ‘‘dish’’ they made. Do you know if there is a word in Korean for the word Menu? If they don’t have one, are they really using the word menu incorrectly?

The short answer to your question is Koreans sometimes use the word “menu” interchangeably for “dish”. I think even in English, “menu” can refer to the meal itself. Take a look at the second definition here.

a list of the dishes that may be ordered (as in a restaurant) or that are to be served (as at a banquet); a comparable list or assortment of offerings; a list shown on the display of a computer from which a user can select the operation the computer...

When other cultures start using a language, it is inevitable. Each country customizes it according to their own backgrounds and other factors. Even my country has different meanings for English words that other nationalities wouldn’t understand.

It’s supposed to be a genre. But Korea uses it as a blanket term for TV shows or series. Because we follow along with their culture, we adopt the modified meanings.

I don’t think it’s wrong. It’s just one country accepting and integrating another language into its culture.

I honestly dislike merriam-webster.com bc there are so many things I disagree with, so I don’t even bother getting any information from them. I feel that is a bad source to use when one is not too proficient in the English language because it can be confusing, and in some cases very misleading in quality content.

One of the main annoying things and I dislike from them [MW] that they actually make people think that ANYWAYS is a word, and not a slang like it should be described in their information. They are purposely regressing instead of allowing the people to progress in learning words correctly when they are not too proficient in the English language. I wasn’t asking if menu in English was known as a dish since I have no doubt what is the purpose of a menu.

I was asking in the Korean language do they have a word for *dishes of food?’’ I know for a fact the Asian restaurants here in N.Y. have no menus since it’s always a buffet, and one price fits all.

As you can see in the screenshot not once this word was described as a slang, and a word that should not be used in formal writings/inclusive as a subtitle/in a sentence. They only say is informal but they even offer (like there’s no issue with this word) 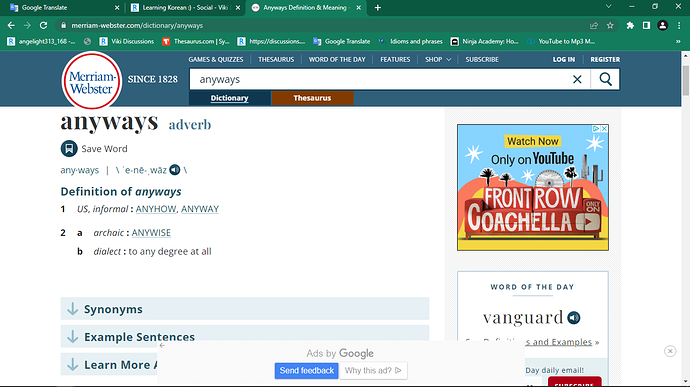 Isn’t Merriam-Webster the standard, most trusted American English dictionary? I never use it because my country uses British English - The Oxford dictionary is what the majority uses here. But since the Viki standard is MW, I’ve been referring to it for Viki-related english problems.

Funny thing I found: MW actually has an entire article dedicated to the word “anyways,” because many people have questioned it.

The whole article is here: 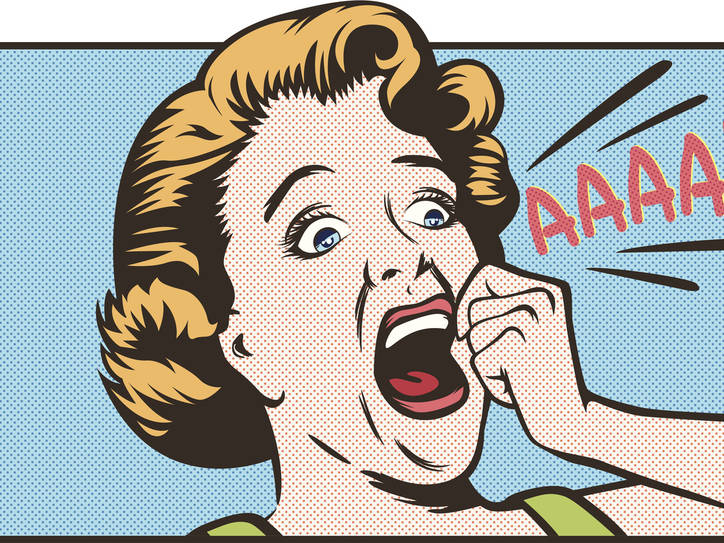 In a gist:
“If a word has been in constant use for over 800 years, with tens of thousands of examples in writing across many linguistic registers, and is commonly and consistently used with specific meanings, it then becomes very difficult for us to understand how you could describe it as not ‘real,’ or not a ‘word.’ Unless, of course, you are using a sense of real or word that we are unfamiliar with.” 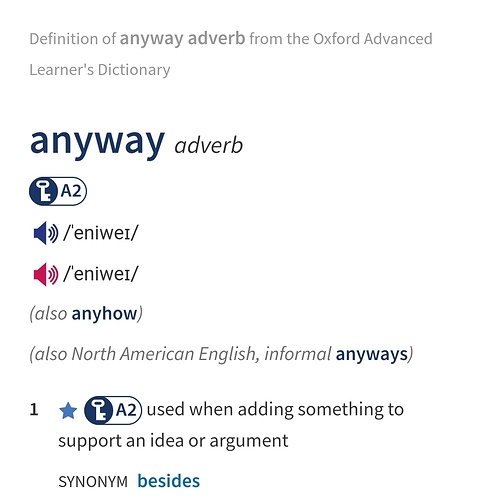 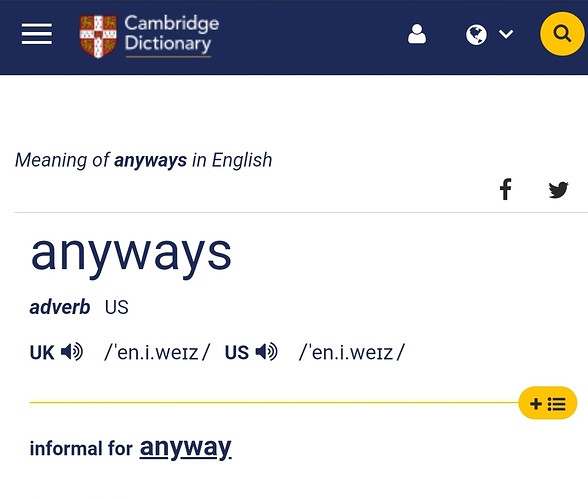 Very confusing hahhaha… You can just laugh at this video.

You can just laugh at this

I think there’s a few other languages where there’s such hilarity when speaking Korean.

Will be good to develop app for study korean in the future. I think help me in it python software development Complimentary to extensibility, Python is embeddable as well. You can put your Python code in your source code of a different language, like C++.
This lets us add scripting capabilities to our code in the other language.

But first you must learn how to read with Learn to read Korean in 90 minutes which is a free pdf you can find online.