All of the articles that popped up in my quick search had her name as Dal Ri. I’m not familiar with Korean, so I don’t know if that makes a difference in your findings regarding what her name could mean.

Oh I made a big mistake. She said her name is from Salvador Dali.

It can be Dal Ri or Dal Li since both use the same letter. Soompi said Dal Li and the Korean people in the drama call her Dal Li. So I didn’t spell it “Dal Ri”

OK, Jin Hitonari the art collector shows up at time stamp 25:36 in Dali and Cocky Prince. He looks like somebody’s grandfather in a pork-pie hat. He’s the Warren Buffet of art collectors.

Very clearly there is an actor portraying a . . . Korean-Japanese art collector?

I guess it’s that favorite traditional rom-com game of mistaken identity, but wow.

I guess, to pull a few thoughts from Modern Magazine Home, it’s also a case of you see what you expect to see, what age, personality, stress, and a thousand other factors condition you to see.

Dali and Moo Hak have their young, anxiety-ridden expectations and vanities, and the result is not a “meet-cute” but a meet-kind-of-weird.

I would be interested to find out what actor is portraying the grandfatherly Korean-Japanese eccentric art collector. Maybe it’s the director’s father. Maybe it’s a security guard at the airport. . . .

At any rate, there are a lot of visuals that appeal to me in DL&CP.

I’d love to know what art museum (if it is one) is the backdrop for the show. That would be a good location for “our” hotel . . .

Be mindful of ©copyright© infringements

as you gleen from DL&CP

I’d love to know what art museum (if it is one) is the backdrop for the show. That would be a good location for “our” hotel . . .

The National Museum of Contemporary Art (MMCA), also known as Gwacheon Contemporary Art Museum, is located in Gwacheon, South Korea. The museum was initially established in Gyeongbokgung on October 20, 1969, but was moved to Deoksugung in 1973. It was moved to its current location in 1986. Founded to contribute to the development of Korean contemporary art by systematically conserving and exhibiting artworks created since 1910, the museum’s area of 73,360㎡ spreads over three floors, and has a

I did my homework and watched the two available episodes of DL&CP. Nice show. A little too weird and over-the-top for my taste(this is coming from a person who is enjoying Police University. feel free to point out my hypocrisy. In my defense, PU contains more “Korean” humor than DL&CP does, IMO).

I don’t think the Japanese-Korean guy is of any importance, and I can’t remember why we’re searching for Korean-Japanese actors when we haven’t even finished the script. For now, let’s just take a character we like. Doesn’t matter what his nationality is.

two people, whoever they are and however old they are, have been married less than six months

Let’s set their ages, then.

I’ve been thinking that it might actually make a lot of sense for Haruto’s family to own the ultra-super-swanky hotel where Ha-Neul and Haruto have their honeymoon.

I still can’t resolve the parent or Haruto being connected with a swanky hotel though, if they were the owners of the Mulberry farm then he’s no stranger to hard graft yet intelligent, having graduated from university of Tokyo but if the family is connected with the hotel then I automatically stereotyped him as spoilt chaebol type!

Yeah, making him the son of hotel owners takes the whole drama on a different tangent. Why would he leave his farm to work in a cleaning company in the city if his parents own a hotel? He might as well work there. The motive for leaving the farm is gone.

maybe he’s a nice chaebol who wants to work from ground up? but then, why would he switch to a cleaning company? Does he have some great passion for eyeglass-wiping cloths? Or are his parents wise old people who want him to experience all kinds of work before he can take over the hotel business? Maybe his dad secretly owns the hotel. That’s why he’s loaded and his kid can go to whichever university he wishes. So when Haruto runs away from the farm with Ha-Neul, his parents secretly follow by moving to their hotel.

Where are we now, on the drama timeline?

OK I think I’m back because I have been asked to to GE work on the K-drama Man In Love (though currently I seem to be locked out of the subtitle editor), and I have been approached about cleaning presubs for The Prince Who Turns Into a Frog.

Regarding who the ML and FL are supposed to be, they can be whoever they need to be to make the synopsis ring true.

As originally proposed, both FL and ML are second-generation chaebols. That is the most basic aspect of who they are. Ha-Neul as originally envisioned is the more detailed character because, for the past four years or so, I have been marinating in K-dramas (idol dramas, chaebol dramas, family dramas, rom-coms).

It has been about ten years since I spent a lot of time marinating in J-dramas. They have the same sorts of stories, but they have a different vibe, and, from what I remember, they are in some ways much quieter, more “buttoned-up.”

Haruto needs to be on an equal footing with Ha-Neul in terms of responsibility, business savvy, and dedication to his particular family’s business. It’s a given in most romances that the ML and FL have to recognize in each other something that says, “Yes, this person gets me. We don’t have to play games or explain ourselves over and over to each other.”

A good example of an unequal pairing would be in Backstreet Rookie. I would say that the convenience store heiress and the convenience store owner are not unequal in intelligence or a desire to be recognized for doing good work. However, they don’t share the same values or have the same goals or feel comfortable and confident in the same situations.

Whether Haruto is in charge of a mulberry farm or whether he is the manager of an exclusive hotel or whether he is . . . I don’t know . . . some sort of hero of the Tokyo Olympics, he has to be worthy of Ha-Neul.

And in terms of what I have mentioned about Viki dramas that have elements similar to those in KSKA, I suggested them mainly in terms of visuals, though I also have been intrigued by character personalities and by what motivates these different characters to pursue their dreams, try to make a living, have meaningful relationships, etc.

At this point, for me, it doesn’t really matter what the ML and FL of KSKA do for a living or how they meet or whatever . . . as long as they are believable characters in a believable world.

My view on writing any kind of fiction is that I cannot write a story about a fictional world and its fictional inhabitants . . . if I have no idea what that word is like or what its inhabitants are like.

This afternoon, in looking up something on Youtube about food, I ran across the channel of a romance novelist named Abby Emmons.

She makes some excellent points about characters in a romance story and how to move them from start to finish.

In the two videos below, she addresses the relational issues that define (for me) how Ha-Neul and Haruto relate to each other. They meet and act on strong attraction, although in an honorable way, they come to regret their behavior, and then they slowly discover, perhaps through the influence of the kami they have accidentally kidnapped, those things that bind relationships together in companionship and loyalty and trust when chemistry wears off.

The end product of creating characters and a world and then writing about them does not have to be perfect, it just has to be something that is basic and solid and good.

And it has to be put in writing. That’s a no-brainer.

What is it going to take to Just. Get. Started?

The Prince Who Turns Into a Frog.

That’s awesome! I’m working on the same drama as a pre-sub editor! It’s going to be wonderful working with you!

Haruto needs to be on an equal footing with Ha-Neul

And I’m wondering the same thing

What is it going to take to Just. Get. Started?

And I’m wondering the same thing

I suggest everyone pick up with Badger’s Production crazy side story, and do what any Production Company does when starting a, A’hem! Production!

Vivi walked into Badgers’ Production Office and, as usual, everyone’s sleepy eyes focused on her. She couldn’t blame them. She was wearing a blue Cinderella ball gown with one glass slipper on. Her hair was a mess, and the dark circles under her eyes told everyone about her sleepless nights. Nigel the Koala blinked and turned away, bored. Someone was always making a dramatic entrance into the office these days.

Miss Willow looked at her screenwriter in shock. “What on earth have you been doing? And what’s that in your hand?”
Vivi looked up guiltily, trying to hide the package behind her back. Her efforts were in vain, because of the telltale crumbs near her mouth. “I-I… was craving some… hot cross buns.”

@my_happy_place, @porkypine90_261 and @kdrama2020ali snickered audibly in the back, watching the show from behind their stockpile of assorted buns. Miss Quokka tried to steal one, but Ali was already on high alert. She didn’t care how cute Miss Quokka was. NO ONE was allowed to steal her buns.

“I knew I shouldn’t have let you have so many Watch Party workshops. Our work has gotten slower, not faster. Have you got any new ideas from the dramas you’ve been watching? Or are you all more interested in filling your penthouse with Hotties? Room and board isn’t free, you know! You have to work to keep your Hotties living in luxury!” Miss Willow tapped her notepad. Being Executive Director of the Badgers’ Production wasn’t easy. 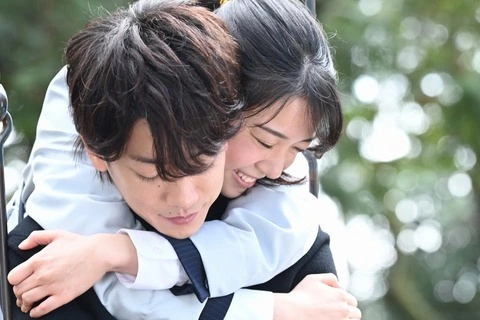 Well Who wouldn’t? snikers @kdrama2020ali “No one can steal my buns.”

Put on your working slippers

WAIT! How’d the squirrel get in?

WAIT! How’d the squirrel get in?

but relies instead on her own circadian rhythm and the sun and the stars to guide her daily activities.

In addition, Miss Willow must remain in the office to over see the resurfacing of the entire back parking lot so that it can more easily accommodate the arrival of large tractor-trailer trucks.

She learned in a pleasant but surprising phone call this morning that someone who has yet to be forthcoming with Marmite Bikky Stix (as per spoken agreement in the hallway some time ago) just recently ordered a large quantity of shepherd’s pies from Tesco and had them flown to Korea.
. . .