I just finished the bride of the watergod. I did watch it on another link, but episode 16 didn’t turn out right, so decided to go to YT, and it was sooo cut up it wasn’t funny. so maybe one day I can finish the 16th episode. It was good up to episode 14-15, then downhill. plan to finish the love knot, his excellencys first love, its ok, another" but "there ok up to point. I think kill it will be my next one. haven’t decided about melt me yet. I don’t want to complain, but my goodness, maybe I am looking for more in our drama, you can only watch heal me kill me a certain amount of times, same for healer, and I do love that one ,

I am looking for more, I guess… hmm stairway to heaven sounds good, and that other one fight my way

Have you tried Suspicious Partner or While you were sleeping? Both legal dramas and so good!

I just finished watching Well Intended Love on Netflix and The World owes me a First Love. I haven’t watched very many C-Dramas, but I loved these two. Both were really cute.

While you were sleeping?

Whenever anyone tells me they’re looking for a drama to watch, this is the one I tell them about. I am close to even recommending it to passersby on the street.

So far I’ve made three people watch it and they all loved it.

yes I have watched while you were sleeping and suspicous partner, lawless lawyer would love to find “who are you” the Korean version, awww maybe I will watch the other one today.

Hello everyone, just a quick note to share a recommendation - most especially to those of you who also greatly love the Slice-of-Life genre. Yong-jiu Grocery Store — I believe this Taiwanese drama is way underrated and I must tell you the story-telling is top-notch.

I’ve still a few episodes to enjoy (there are 10 total), but couldn’t wait to share a mention. The lead actors portray the depth of their characters beautifully, and the numerous supporting actors, past and present, nearly steal the show. The present-day story entwines with the past, revealing through flashbacks that may not be completely understandable right away, but you will soon say “ahhh” as the story clarifies itself. If you enjoy a drama that feels nostalgic, sentimental and often poignant, please queue up Yong-jiu Grocery Store. 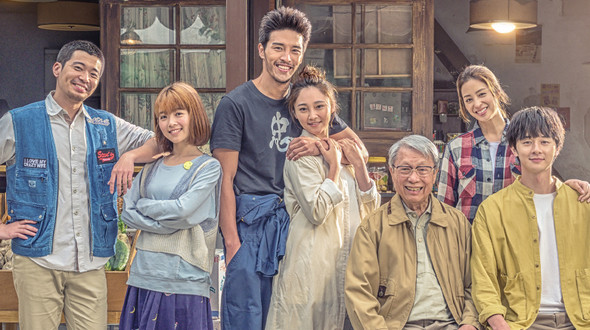 The youngest development department manager in the company, Yang Jun Long (Derek Chang) was well on his way to moving up the ranks of the real estate company in which he worked. But at thirty years old, he was beginning to wonder if work was all his...

I’m waiting for season 2. It’s one of the few romance comedy I like.

It’s been a long time …
Last noted here in October Doctors.
Since then, I didn’t feel that great and turned to the old friend the Asian drama.
Woman With a Suitcase - (now it’s restricted, so probably I was lucky with that one) An Okay watch.
Ghost - So Ji Sub, I am guilty.
In a Good Way - a really nice romance if you have not tried, it was restricted for a long time in my region finally was able to watch it.
Mother - thrilling, I had to watch even I turn away from violence scenes.
Wok of Love - enjoyed the funny mood and the kitten
Punch - from the easy watch to a darker story, it hurt - but was still good.
Since the license is back again for the umpteen time Faith.
1% of Something - enjoyed it far more than the original version.
The King of Romance - watched out of boredom and I couldn’t make up my mind on a K-drama there are still so many to watch - I made it to the end. I can’t recall much of the story and since it is now restricted, well …
Caution, Hazardous Wife - it’s been so long for me that I have watched a J-drama and with Haruka Ayase, the good thing about a 10 episode drama from Japan I rarely get bored.
Queen of Mystery - a good watch a young Korean mix of “Miss Marple” and Mrs. Amanda King (if anyone should be able to remember). I heard the 2nd season isn’t as good but since I do not have access I don’t mind season 1 is fairly enough for me.
Radio Romance another one finally accessible and after hearing not too good reactions I still found myself entertained enough to watch the whole show.
Beauty Inside - That was a big surprise for me because I completely forgot about it. This was fun and partly sentimental.
Radiant - If one accepts that the “pictures” are not in the usual red thread succession, even when it comes to flash backs … Then there is so much this drama can offer. And yeah, you might need tissues.
Let Me Introduce Her - I don’t know why I chose this one probably because it has been so long that I watched a drama with Kim Jae Won. Story aaargh, anyway what kept me watching was listening to the OST

The Tale of Nokdu - I kind of expected a fluffy drama but that was a mistake. It offers some cruel scenes but is a beautiful drama that kept me watching. Jang Dong Yoon it made so much fun watching the guy play.
The last drama for 2019 was Dr. John and I still can’t decide if the ending ruined this drama for me, one thing I can admit, I can only forgive it since it’s Ji Sung.
Started last but finished in 2020 The Greatest Show, I was reminded on Stars Falling From the Sky but for the better in execution. I never had so much fun watching Sung Seung Hoon since He Was Cool.
100 Days My Prince - liked it but needed a bit longer to warm up with the show.

Now once again I am at the point, where I don’t know what to watch.
I tried Hotel Del Luna and Melow is My Nature, but could go beyond half an hour or so. Now trying Flower Crew …

After Nokdu, Flower Crew will seem so shallow and badly acted…
Have you watched My Mister? We recently finished subbing it. It’s really good.
I enjoyed very much (not on Viki, sadly) One Spring Night.

Flower Crew 20 minutes into the drama I had such a shallow feeling that I put it aside.
I will watch/try My Mister later.
I started to re-watch Search: www again, I think I really need a good femal lead character at the moment.

I’m thinking about watching that one and War of Prosecutors.

I just finished watching Fights Break Sphere (cdrama) and before that, Mask (kdrama)

I’m watching My Mister for the second time. I love it very much and I’m so happy that it’s now on Viki! In my opinion, this is a healing drama. I love the story, the script, the direction and all the actors. I highly recommend watching it: it’s a bit sad, but it’s really, really good.

I’m currently watching The Tale of Nokdu, too. I find it refreshing and funny, and the plot seems interesting.

I think the reason why [My Mister] was sad; it was bc she was left alone when in the ending they should have made it so that when he went to see her (IU) he saw her walking happily hand in hand with a guy, and as he came over to her, he very happily congratulated her. The way she said ‘‘I will invite you to eat something delicious’’ gave me a vibe like she would become his lover in the end. What you think?

I think this is somehow a spoiler

In my opinion, they purposely chose an open ending so that everyone could give it a meaning in which they could identify themselves. The most relevant thing is that she is alone both at the beginning and at the end, but now she can rely on herself, so she’s not really alone

Good point. Funny how we see the ending differently lol

But both points of view seem truly valid: I think it was what the creators of the drama hoped for

We are discussing My Mister, right? Hehe, I started watching it because of this discussion. I want to see how I will interpret the ending. I’m on ep. 13, so I’m getting there! Meanwhile, please continue, this is very interesting. Open endings can be great tools for passing a message in a drama. I’m excited for the conclusion now! So far, their relationship is just so beautiful in that they complement each other and understand each other–like soulmates without the romantic aspect (at least, in respect to the passionate love. I still think their love for each other is stronger than the love that other kdramas portray *cough Boys Over Flowers).

BTW, the show is a gem, and so is the OST. The acting is hands-down outstanding. For some strange reason, I seem to be on an Lee Sun Kyun drama marathon. I am currently waiting for new eps for War of Prosecutors, and before that, I was watching Pasta. It was unintentional, I promise

My eyes light up every time I read positive comments about My Mister. I perfectly agree with you on the nature of their relationship. The show is really a gem, from the beginning to the end.
… And now you’ve made me curious, so I have to watch War of Prosecutors