If you guys love watching Korean movies this is the one for you. Loved it although is a very complicated theme.

On her deathbed, Soo Ah (Son Ye Jin) makes a promise to her husband, Woo Jin (So Ji Sub) and her son, Ji Ho (Kim Ji Hwan), that she will return to them a year after her passing. Wishing, rather than believing she would keep her word, Woo Jin and Ji...

I started it, haven’t gotten very far.
but to me questionable, not able to explain what I mean, was she buried? reincarnated, just came back to life, then wouldn’t the body be stinky, did she come out of her grave, (I haven’t watch far enough for that part) a ghost? or she wasn’t dead after all? in some kind of limbo? guess I will have to watch it to find out.

You need to watch it, and pay attention because it’s complicated. The truth is, the story was too far fetched to be believable, but the boy and So Ji Sub play an amazing role so I went along with the ridiculous story. Did you see hi/bye momma? same story except ending I was able to accept.

After postponing it for so long, I’m finally starting on NIF 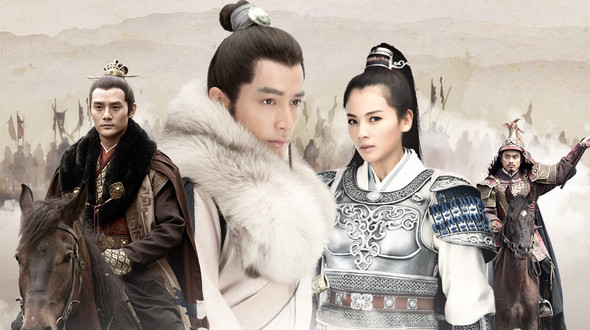 During the great unrest of 4th-century China, war breaks out between the feudal Northern Wei and Southern Liang dynasties. General Lin Xie of Liang takes his only 17-year-old son, Lin Shu (Hu Ge), into battle and successfully fights off the hostile...

You have a long way to go. lol

I am doing something that helps me to tolerate these kind of long dramas; when there’s a battle/fight I hit the skip button so fast and make sure I never see a battle scenes which are too long, too bloody and too unnecessary.

Ever since I started doing this I am able to watch the whole drama w/o dropping it.

I haven’t even progressed to episode 2 yet, since I was busy baking bread.

Perhaps, but I can’t think of them at the moment

yes I did see hy by momma

maybe I need to do that one to
planning to start the 365 one, and be with you, restarting it, so I won’t miss anything

ok I don’t watch dramas on Youtube, but I just gotta tell you this one I watched today, I guess all total abut an hour . called Secret Queen maker( may be a huge ad for Lancome,) but this one had some of our cute actors in it, the girl “plain Jane” she went through some stuff with these guys, anyway this is so cute, and the ending fantastic! don’know which company made it , but there was a lot of positive stuff to this girl including a makeover. I don’t want to give it all away! so if you have a chance do watch it, really not long either

finished watching antique bakery. had to fast forward some of the scenes, but this was a really neat drama!

I always do that when there are certain scenes I don’t feel comfortable watching. Especially the fighting scenes,vulgar eating noises or bathroom scenes. I was watching on NTFLX Revolutionary Love, and the drama was good but the bathroom scenes were the most disgusting thing I have ever seen in a drama. These were rich people going to the bathroom and the noise was so real and nauseating. I was disappointed with SIWON bc he has never done scenes like that before (the Dad in the drama/his scene were the worst one!)

Anyway, I gave up and went straight to the last episode to see the ending since between him and his Dad in the drama they ruined it for me with those scenes; that I had to constantly run and skip skip but I wasn’t fast enough so you can say I was sick to my stomach. Also the father was very abusive the scenes were so heartbreaking. Some scenes were too hard for me to handle.

those bathroom scenes and passing gas, why in the world would they put stuff like that in a drama? and thats one drama I really wanted to see. so with me saying something about other scenes and all was wrong? wow go figure! the fighting scenes too,

anyway these scenes and other scenes to me shouldn’t be seen. ok call me an old fogy or whatever, the word decency comes to mind,

again thank you so much angelight313 at least one person understood what I was saying! “,my angel in disguise” hehehehe.

Nirvana in fire, I think I have seen it, now have to check it out

well looks like I am not able to watch the first one due to no english, I plan to watch the second one, it has english subs!

@frustratedwriter It certainly has English subs, try reloading, sometimes in the past few days videos seem to be missing subtitles but by refreshing the page they are there.
For this story I would recommend to watch season 1 first, I must confess I was not so happy about the 2nd one, but this could be because of my own expectations for the storyline. But season 1 is really outstanding, even if it is a viewer like me rarely trying that genre and liking it.

hmmmm ,ok I will try again thanks Lutra

aaaahhh! old person understanding what English dubbed means, excuse me for my lack f knowledge! fantastic! so I can watch or be busy with stuff! again thanks Lutra! the first season first… oh yeah the first episode, gory!! but will keep on with this.

thanks mirjam_465. turning off sound will give that a try too.

I never fastforward, cause I always feel I might miss something. But during “toilet humour” I either cover my ears or turn off the sound (usually covering my ears, since by the time I reach the computer to turn off the sound it might be too late and I really don’t need to hear it. It’s bad enough that the neighbours’ toilet is right behind my couch [with a wall between it of course, but still …]).
Last night I did see a very disturbing episode of Fleet Of Time (TH), though. First of all I have to mention it’s a great series and what happened in that scene was only realistic, but oh so sad and unfair and horrible. And the way it was shown made it even worse, cause it was alternated with shots of something else that was happening at the same time, which on the one hand made you realise all the more what had lead up to the horrible thing and on the other hand made it all the more disgusting.
So I didn’t skip it, but it did upset me. I cried my eyes out and even had it in my mind when I woke up this morning.
Still, as a whole the series is great and in a way I even think it’s good that they didn’t totally avoid this topic. So everyone who thought of watching it, just do it. And don’t worry: the scene I was talking about is in a very late episode, so your safe until then. Well, some other bad things happen too way before that, but not as disturbing as this one.
Anyways, I might be speaking in tongues, but that’s just because I don’t want to give any spoilers.