Drama within a drama

I’m currently watching ‘You Are My Spring’ and sometimes they show the drama one of the characters are acting in. It’s funny, cause with the small glimpses you sometimes get invested in that story too.

Search WWW also had something similar (if I remembered that correctly).

Any other dramas that do this?

I can think of a couple where one of the main characters is in the process of filming another drama or movie, such as in ‘Touch Your Heart’, but I can’t recall off the top of my head where they actually showed scenes of it like they do in ‘You Are My Spring’. I’d have to think about it more.

Yeah, like you said: Touch your Heart crossed my mind, but I wasn’t sure about it

I THINK Touch Your Heart showed a tiny clip from Her Private Life, but don’t take my word for it, I might be mixing dramas.

In the drama “She is the One”, they keep showing ML watching another drama, Love in Time. I liked to joke that the She is the One ML was taking overbearing jerk classes from the Love in Time ML

Oh wait, it this what you mean, @feyfayer? Or did you mean a drama being acted out by a character?
In Touch Your Heart’s very beginning, they show FL imagining herself in the FL role of a new drama… that’s how they show a parody of DOTS and do a tropey crime-thriller. Somewhere along the drama, ML starts watching FL’s dramas, so we see a scene in which she’s going through a break-up with that drama ML and another one where she’s playing a detective. The “other ML” is ALWAYS Jang Ki Yong

but there’s no real continuation to it.

In Love in Time, the FL is a writer and she imagines her stories with herself as the female protagonist. I really liked it when she did that… it was like another mystery/detective drama going on inside. But she stops imagining that mystery drama after a few episodes and that was annoying -_-

It can be both

But later on, if you remember, the FL actually starts filming a drama or movie, and we see scenes of her doing so. For example, the scene they are filming outside the courthouse where she’s supposed to have a kissing scene, and our ML shows up and tries to stop it. We also see a scene she is filming after their break up where she pulls off an emotional scene better than ever because she is still so sad in real life. I don’t think we ever see any of those scenes get to air on TV during the main drama, though.

In Melo is My Nature, there is a really interesting but potentially confusing plot where the FL is a screenwriter who is writing her first drama which turns out to essentially be the actual drama we are watching in the first place. It’s very meta, if that makes sense, especially when, during their talks about who to cast to play certain roles, they actually bring up the name of one of the actors who is actually starring in the main drama. It’s a funny scene.

Did anyone here forget Goblin and Train To Busan 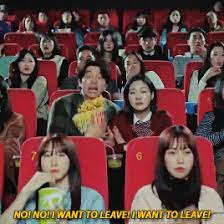 There are lots of dramas that show clips from other dramas or movies within them, but the original post was asking about dramas where one of the main characters is also filming or starring in another drama as part of their plotline, and then scenes from that are shown during the original drama.

I don’t remember the dramas any longer, it has been a longer time. In a weekend drama, they showed a morning drama and vice versa. I try to remember, but I guess I won’t recall it, I am sure the drama itself is no longer available.

Ooh! This is a new thing for me. I’ve never seen crossovers in K-Dramas. This thread is going to be interesting.

Thanks for mentioning that! Melo is my Nature crossed my mind, but I didn’t know why

. Makes me want to go back to look at those scenes

I really love that drama. It’s so quirky and unique.