It’s not on Viki, I know. But I’m posting it here because I need to share just how bad this movie has messed me up. It’s both beautiful and tragic. It’s a heartbreaking tale, but there’s a bit of hope in it too.

You certainly shouldn’t watch Love Like the Falling Petals if you’re already sad. Instead, watch it to make sure you’re still a human being with a beating heart in a world that doesn’t have one. 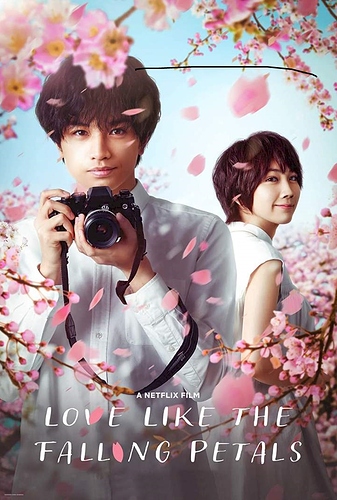 This is typical of Jdramas. They always have the pretty posters that look like it’s going to be a good romantic drama but then it’s tragedy.

The second i see a pretty, warm poster with ML hugging the FL or on some other romantic poster, i run for the hills x.x

This movie story is a remake of a drama with same love story/tragedy (different title) I saw here at RVIKI many years ago, and when I saw the trailer on ntfx I knew right away it was a remake, and I didn’t bother to watch bc I knew about the ‘‘tragedy’’ involved in the drama.

But I must say, it’s worth watching if you haven’t seen it before because the drama is romantically so beautiful, and those parts are the ones worth watching. Plus, the FL/ML make such a GORGEOUS loving couple. Although I hate tragedy in dramas, this tragedy is part of what makes the story complete, for without it, there won’t be much of a love story to tell about. Thanks @adrianmorales for the info.

Tell me about it

Happy to spread the news on awesome Asian dramas. I’ve been so busy with work and stuff that this is my first movie in ages.

Not all of them are tragic. Did you ever saw Last Cinderella (2013)? I LOVED< LOVED that story, and the ending was fantastic because it ended just like I wanted the end to be. It covered so many things in that one movie/drama. But the reward is especially in the ending.

Although tragically, very recently I found out that the ML committed suicide, and I cried so much because he/she was a great actor/actress. It’s so sad that any human being is driven to suicide bc of prejudicial feelings, and an injustice that society impose on people. Every human being has the right to be what or who they want to be, and they do not deserve to be condemned for that.

Haruma Miura was a Japanese actor and singer. He made his acting debut in the television drama Agri and rose to popularity after starring in the film Koizora, winning Newcomer of the Year at the 31st Japan Academy Prize. Wikipedia

Cause of death: Suicide by hanging

Yes, I watched it several years ago. I’m still very sad Miura is gone. He’s such an amazing actor. I tried re-watching it again but couldn’t because I just miss seeing Miura.

Tell me about it

I have to read spoiler tags or reviews from ppl who’ve read the comics just to be sure I’m down for some heartbreak.

The couple both are so down to earth, and normal looking, not some kind of Idol looking dolls, and that makes the love story so much real.

The best love stories out there involve ordinary folks. That’s what I prefer, anyway.