Terrible Pick-Up Lines to Cheer Everybody Up (ft. Flirty Dramaland guys because why not)

It’s about time the Hotties get their act together and move their careers along per your direction, don’t you think?

I mean, seriously, he would make one heck of a “don’t mess with me” . . . something. Chona, yangban, merchant, general, soldier. The hair might be a problem, but K-dramas (IMHO) do wigs and beards better than C-dramas–much more naturalistic.

Seriously - Are they not listening to me! hahahahahaha!

I tried to watch the video that meme comes from but I just could not. That child was pretty funny for about thirty seconds but the complete disrespect he showed his mother just really horrified me.

My hope is that his father or some other really loving male role model was able to explain carefully why he would never act that way again.

I am sort of serious in saying your Hotties should take heed of your career advice. You would make a better manager for some of them than the ones they seem to have.

As the sad case of Rooftop Prince’s Yoochun makes clear, not all “K-entertainers” are equal in terms of ability to resist the lure of material gain, plan ahead, avoid scandal or even dress as well as they might.

Maybe you and I should form Koreaboo Productions and remind the Hotties of what exactly they are supposed to be doing and who they owe their careers to! 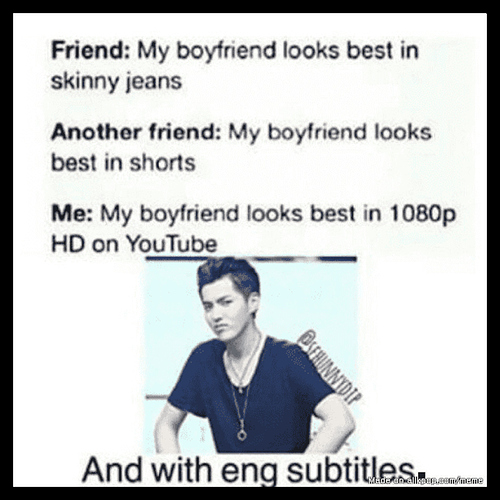 Your meme made my day!

Are you a computer keyboard? Because you’re my type.

You must be Windows 95 because you’ve got me feeling so unstable.

I am sort of serious in saying your Hotties should take heed of your career advice.

Oh, yes, truly terrible, terrible pickup lines. Once again, we must bow to the Mistress of Cheese!

I pretty much love - You Auto Complete Me

lol good luck with THAT

Thats what their managers are for. And most manager’s do winderful jobs. But at the end of the day, they are their own person. The companies impose fines on them if they do stuff like leak spoilers. But again, they aren’t children.

What I am angry at is the fact that most of them WERE children when they entered the industry. I’m not a parent nor am I an adult yet, so maybe I’m stepping out of line here, but I really don’t understand and borderline hate parents who sign their children-- some as young as three or four-- into the relentless, terrible, adult world of entertainment. There are enough examples from all over the world, in every entertainment industry, that showcase the state of people pushed into the spotlight when they were very very young, and now they don’t know ho to cope because they’re sick and tired and filled with too much pride and it’s all they’ve ever known. These stories almost always end in drugs, abuse and suicide. My heart hurts. It hurts even more when I watch dramas like Touch Your Heart, which show a little of the dark side. The poor woman never even went on a SCHOOL PICNIC. She never went to a normal school. How many ordinary, everyday things have these people missed out on?

Im sorry I went on such a rant, that meme of yours triggered me. He’s the former EXO member who just got arrested over abuse charges.

), I’m glad that most k-pop guys and girls are part of groups. I’m happy that they usually have a group of people their age who they can fall back on, who are in the same situation as they’re in.
“You’re the reason I stuck through training and debuted. Thank you for sticking with me.”
“I know we used to hate each other while we were trainees but I think you’re starting to like me now so I’m happy.”
“Thank you for being a wonderful hyung and taking me under your wing when I was having a hard time during training.”
“I’ve been around you guys more than I’ve been with my own parents. Thank you for being good hyungs.” (ouch. this is sad.)
“I’ve grown up in this company. Thank you all for raising me.”
“Thank you for being my second home, since my parents are so far away.”(the Chinese and other international members)

I cry every time I watch this video. They were so tiny.


see this one at around 23:32
Context: the video they had shot couldn’t be aired because SK suddenly changed their laws. so they had to do a last-minute shooting and they all thought it was a disaster because they werent orepared. To boost the morale and lengthen the video time, they decided to have a round of complimenting each other.

I totally agree with you about “child actors” Look at what Britney Spears here in the US has endured and she is an ADULT now and get out from under the thumb of a parent who wants HER MONEY! And many other US Stars have fallen into the same fate or drugs or suicide or alcohol or overdoses so you are not alone there in worrying about these kids. I hope most agencies treat them well. They do end up in dorms it seems and WORK tireless HOURS and HOURS on choreography and practice! That scares me to think they don’t have a life.

I wish all these stars much health and blessings as I watch them and enjoy their VAST talent! I am honored that I have found Korean DRAMA and Kpop because I think they are just an awesome culture and people

(PS they don’t anything but my LOVE)

Can I have your picture so I can show Santa what I want for Christmas?

That child was pretty funny for about thirty seconds but the complete disrespect he showed his mother just really horrified me.

yes, I didn’t find it funny, I could only think about what I would have done to correct it. Letting that behaviour go on will only make their lives miserable as he gets older. It’s so much easier to correct a 3 year old than a 13 year old.

Today I went to the best supermarket chain in North America, Wegmans, to one of the “flagship” stores, to pick up some groceries. I bought a lovely package of Swiss cheese slices, a favorite when I was growing up.

My father–half Scotch-Irish and half Palatinate German–would cook on weekends, and we often had Swiss cheese and ham on rye bread.

I would love to know some really terrible pick-up lines auf Deutsch from an international “cheese” expert. I have a German neighbor who grew up in Bremerhaven, and we laugh about a lot of things together. I would love to share some quality cheese with her.

@gaby_heitmann_975, is it possible you could contribute one or two cringe-worthy lines?

Wanna go on a coffee date? Cause I like you a latte.

Do you like yoga? If you do, then Yoganna LOVE me!

Are your parents architects? You are so well “build”
Sind deine Eltern Architekten? Du bist so gut gebaut.

I hope I could help you a little bit

hehe this is a good one!

Best pick up line ever - from JUNHO

Guess what I’m Wearing The smile you gave me.