Apology accepted!
@meonmyown, those are not shows we want to see, they were only used as references to make a point.

I don’t know what happened but I just now got the badge, I was deleting some of my posts and I saw make Wiki and clicked it and I got the badge and deleted that post, no problem right? 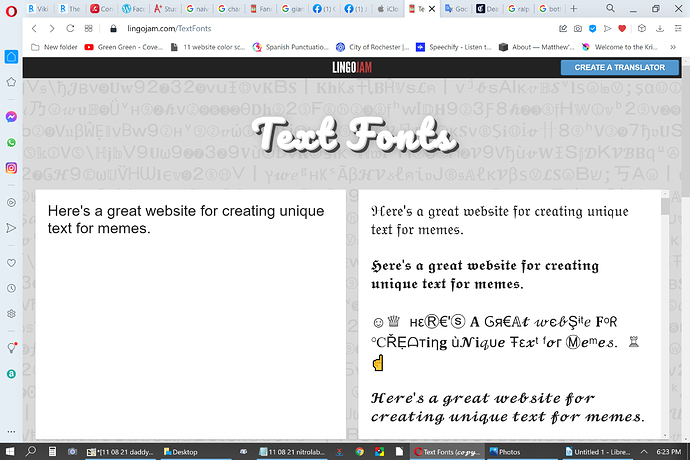 The fonts are limited. I know there are other similar websites. Definitely a tool worth investigating. 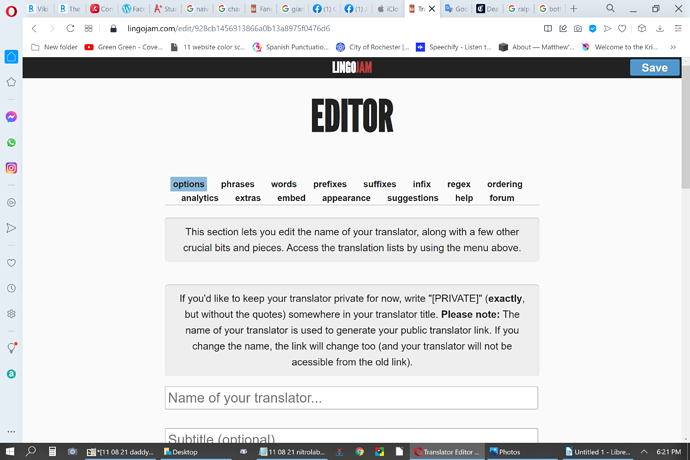 WHAT??? What if some Viki worker bees used LingoJam to create a translator that came up with non-lame pre-subs?

Would that mean less time spent scr–, er, talking to my desktop computer as I bang my hea–, er, rest my head gently on my desk and sigh?

If Elton John were Korean, what Italian restaurant would he eat at?
Hakuna Fritatta

Or is that so much of an inside joke that NOBODY would get it? 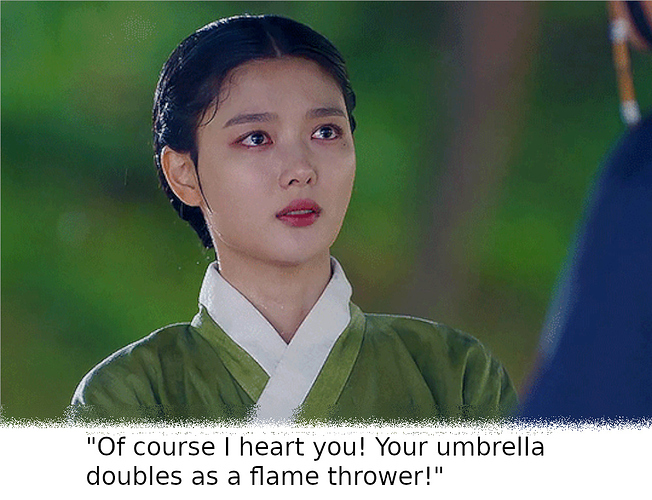 Talk about originality! Here’s the basis for a C-drama that would probably never make it to Viki because it would be absolutely fascinating and terribly controversial.

And it would require a Historical Hottie to age rapidly, wear a fat suit, and spend a lot of screen time slaughtering men, women, and children.

I love it when I can learn about the origins of stuff.

And ever since the 1980s (when I met a number of Chinese students “sheltering in place” at the University of Rochester in New York during a troubled time), I have had a “thing” for the Terracotta Army.

“In 1974, farmers digging a well near their small village stumbled upon one of the most important finds in archaeological history–vast underground chambers surrounding a Chinese emperor’s tomb that contained more than 8,000 life-size clay soldiers ready for battle. Megan Campisi and Pen-Pen Chen share the fascinating history of Emperor Qin Shi Huang.”

The first emperor of China makes Ma Hwang look like a choir boy.

You are so funny,

Fight for Love (Tentative title) Chapter 1 Characters: Sarah Geronimo (Filipino) as Areev Won Bin as Yong Hyun Joon Areev (half Korean and Filipino) lives in the Philippines with her mom and step-father (both Filipinos). Knowing her dad as Korean, she paid a lot of attention on Korean culture and language. She can speak korean, and she is actually a a smart and witty girl. However, they lived in poverty with her mom working as a bar hostess and step-dad who soak himself to gambling. Areev ne…

still lit? (人 ^‿^) I hope someone will come along, and produce a finished production. Originating from the hearts

of avid fans of Asian dramas, both of these stories are so worth producing

@jadecloud88, Legend of Anle’s cast, and production crew in action, has me thinking about a certain production over in a another thread.

Fight for Love (Tentative title) Chapter 2 Continuation… Hyun Joon continues to ignore the existence of Areev even after living in the same house for 2 months now. Areev however decided to pick up her life. She started going out when Hyun Joon is not around. She could careless about him anyway since he also does treats her like invisible. She started looking for a job and she got hired as a waitress in a high class restaurant, Bon a’ Petit because of her quirkiness. She wanted to earn money f…

“You wouldn’t believe what I saw in the breakroom the other day, a gazelle had somehow wandered in off the streets, made it’s way all the way up to the breakroom and had helped itself to a bowl of popcorn that someone had left uneaten, a GAZZELLE! I’m not certain, I’ll have to check but I think it might even still be there since no one bothered to shoo it away.” 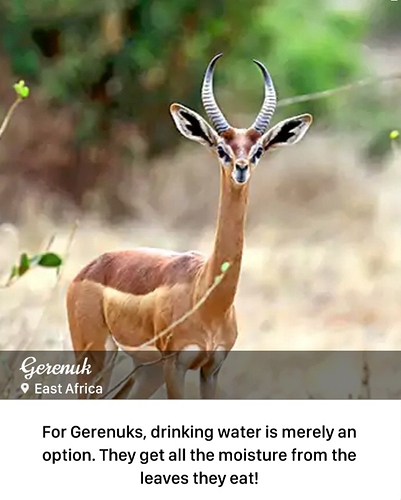 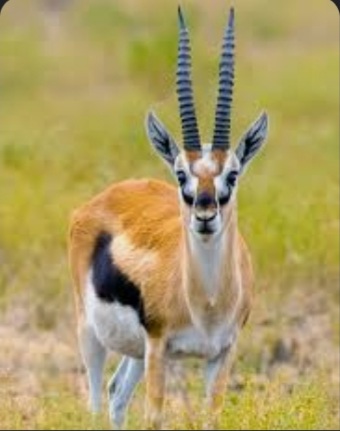 Yes, I recall that it was the most likely a Gerenuk at the time I researched what the popcorn eating animal was. A reverse image search pointed to Gazelle popcorn gifs so I looked up pictures for Gazelles and it lumped in Gerenuks, Springboks and Impalas all being variations of that genus of antelopes. Having the distinct large ears with the black antler horns pattern ear fur, large eyes and long skull structure.
The closest matching from Gazelles to the popcorn eater were young female ones but there were more matches when comparing with Gerenuks.
I think I went with Gazelle as it was the most likely to be known out of the bunch and exercised a bit of Hollywood creative licence and bent the truth a bit, I certainly remember after some 2-3 hours researching antelopes, that it was a ridiculous amount of time spent just to spin a story of a Gazelle/Gerenuk eating popcorn in a Korean office building!
I felt like the FL in Pretty Proofreader who was supposed to just proofread and make spelling corrections but instead would go galloping around Japan researching facts in the manuscript she was meant proof read.

As a child, I had several paperback books with line drawing illustrations of various birds and animals. The books came with what were essentially large stamps, pictures of the various animals that needed to be licked and pasted onto the matching line drawing. I still have one with lizards and snakes.

I would have loved African animals, especially animals with big eyes and long lashes. Gerenuks are, by my inner six-year old’s standards, just perfect.

(Why does Gerenuk sound like the name of someone’s reincarnated harabeoji?)

If at first you dont succeed, Try! Try! Again!

Maybe we could try for a movie script, or a two episode drama script?

Dating on Viki discussions is a bit ambiguous. The date on this is “6d.” Meaning November 17? Since getting socked with COVID in January, I have been really slow to get back in the game when it comes to supporting Viki, so I am super behind in keeping track of the Discussion Board.

And someone will always have something about their daily life that prevents consistent focus over time, which is part of what makes collaborations of any kind successful.

Besides, there are no venues for Viki supporters/subscribers to do their version of “fanfic” regarding favorite actors/actresses/dramas.

Since Viki is about visual entertainment, AND since supporters/subscribers come from many different cultural and linguistic backgrounds, AND since the government of Korea (if not other Asian governments) strictly regulates what the world officially sees of its entertainment “products,” I think that Asian drama fans would have as much trouble posting their writings and artwork as Harry Potter fans had. (J.K. Rowling was very protective, copyright-wise, of her young wizard and all his friends).

I personally am doing so much better than I was nine months ago when I came home from the hospital and began recovering from COVID. My mental focus and stamina are so much better, but it will take another year at least for me to regain the ability to multi-task for a long period of time without suddenly running out of steam.

And the U.S. economy is is such a bad state that the majority of my time seems to be spent trying not to go into debt. By the time my day winds down and I have quiet time for recreation, I don’t want to think, plan, create, or do anything.

The world will be back to normal when local, national, and international politics do not require human beings to constantly keep their heads down, their thoughts to themselves, and their devices tuned to the latest bad news. We are not there yet as a world, and I am certainly not there yet as a person.

Which is why, currently, I am happy that Viki has had such offerings as Law Café and The Side Story of Fox Volant (perhaps better translated in English as Chronicles of Flying Fox). Stories with grit and hope despite craziness in the world.

So glad you are getting better. Take care, rest, and stay hopeful.
By the yard it is hard, but by the inch it’s a cinch (life is less overwhelming if you take it one step at a time.
https://bryanhendley.medium.com/inch-by-inch-lifes-a-cinch-8d60cc53441c