in the USA a lady passed away, she was one that has been around for almost 100 years, gave us so much laughter, Betty White, I loved watching her 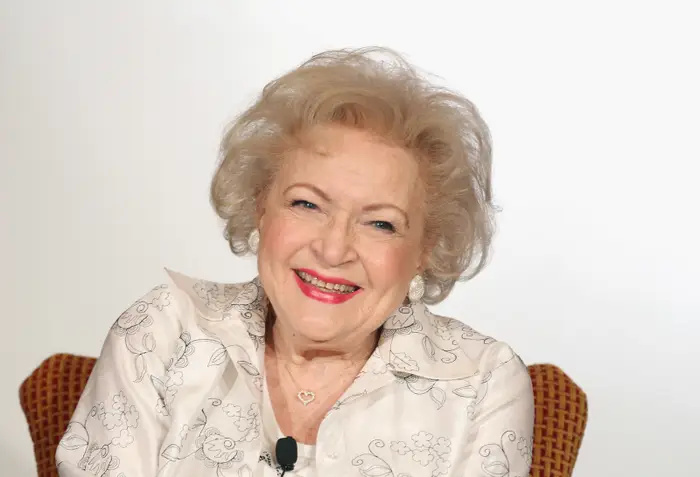 Betty White, the beloved television icon whose career spanned eight decades, died Friday just weeks before she was to turn 100. In the 1940s, Betty White put her career on hold to volunteer for the American Women's Voluntary Services during the Second World War.

Oh no, she was a funny and quirky lady, I remember her from the TV Show Golden Girls. I liked her the most. She was beautiful and I think she lived her life to the fullest! RIP Betty

She was a wonderful and happy person …
I also found the “golden girls” wonderfully refreshing. They were so funny

The Trio is complete:

I’ll always remember her as Sue Ann on Mary Tyler Moore Show. And also watching her when she would guest on Password with her real life husband Allen Ludden. Of course, I loved her as Rose on Golden Girls. What a talented lady! My condolences to her family, friends, and fans.

A few days ago my daughter was screaming ‘‘Mom, Betty White is going to die!’’
I asked her; why you say that?
She was angry that she was celebrating her 100th birthday before time. I told her that was a superstition we had in our country, but they (AMERICANS) don’t believe in those things like we do.

Yesterday she screamed; I told you! BETTY WHITE is dead! she shouldn’t had celebrated her birthday before time!

I told her, I’m glad she did because she got to celebrate the birthday that she would never see again. She enjoyed celebrating one last time, and went out with a big bang! She left with OLD NEW YEAR.

What she didn’t know, and I told her; that Betty White said one time in an interview. ‘‘I don’t know why people make a big deal of lasting/living for so long. I am tired of seeing everyone I love die, and I’m left here without them.’’

I knew she was tired of living bc the people she loved and wanted around her, where no longer here, and she wanted to join them already. That REALLY special someone was the love of her life; her husband who had died in 1981?

One of my grandmother died at 90 years old, and according to her, and what she told me; she was so tired of living for so long. Her favorite phrase when she was frustrated; ‘’¿Por qué DIOS no me lleva ya?’’ The issues weren’t big stuff, but she was tired of all the drama in the world. She had gone through a lot of terrible things during her childhood like San Cipriano? Hurricane, THE DEPRESSION, war after war, and I guess she had enough of ALL that.

She did go to heaven in her sleep. At least, she didn’t had an agonizing death, and we know that bc she had a smile on her face when she was found in the morning in her bed. I hope Betty White left HOME in her sleep, too. THEY BOTH DESERVED IT. 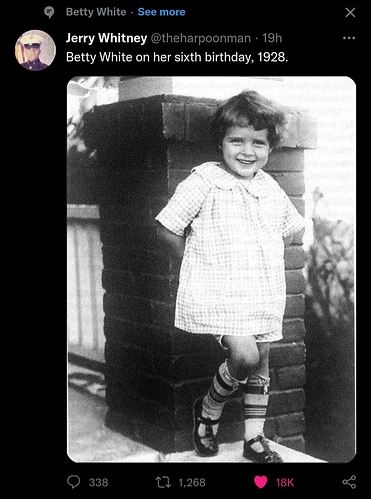 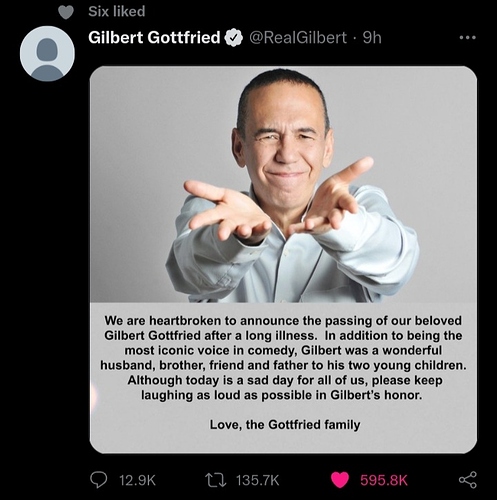 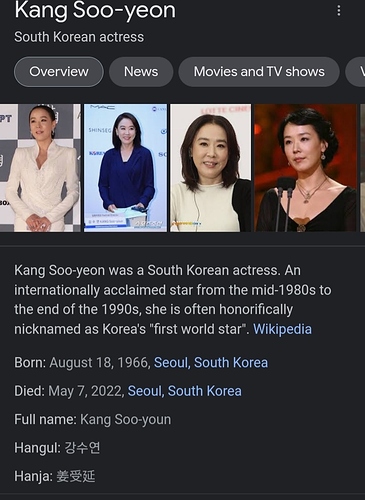 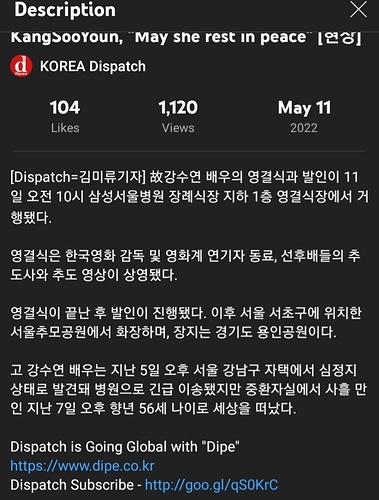 Screenshot_20220511-005749_YouTube.jpg717×944 137 KB
Per Google Translate
[Dispatch = Reporter Mi-Ryu Kim] t The funeral and funeral of actress Kang Su-yeon was held at 10 am on the 11th at the funeral hall on the first basement floor of the Samsung Seoul Hospital funeral hall. At the funeral, a memorial service and video of Korean film directors, fellow actors in the film industry, and seniors and juniors were screened. After the funeral, the funeral was held. After that, cremation was held at Seoul Memorial Park located in Seocho-gu, Seoul, and the burial place was Yongin Park in Gyeonggi-do. The late actress Kang Su-yeon was found in cardiac arrest at her home in Gangnam-gu, Seoul on the afternoon of the 5th and was rushed to the hospital, but passed away at the age of 56 on the 7th, three days after being in the intensive care unit.
https://www.soompi.com/tag/kang-soo-yeon 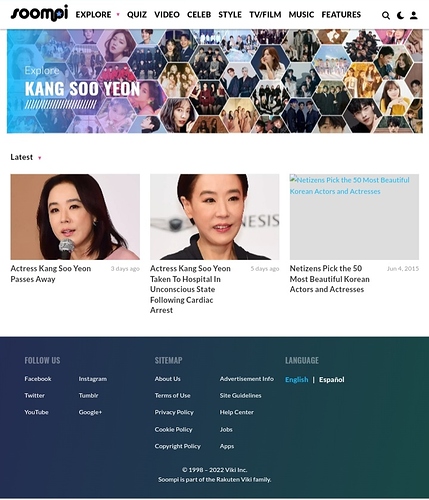 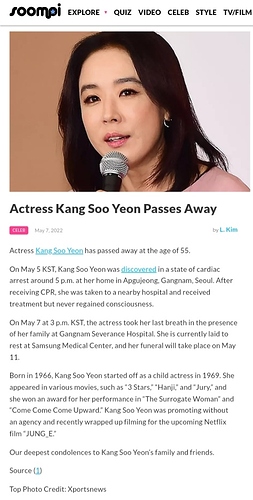 . She was still so young.
I hope she didn’t suffer

not really an icon, but a favorite actor, crush time, tony dow of leave it to beaver, age 77

tony dow of leave it to beaver 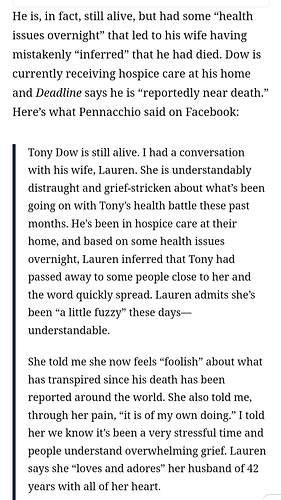 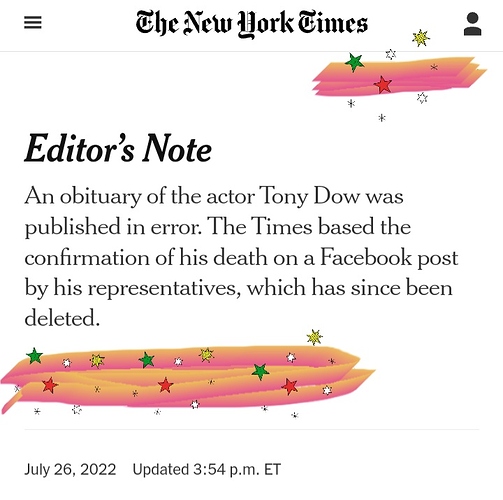 OMG!!! how embarrising! sorry for the misinformation! thank you for the update.

now Facebook ought to do what they do to us, put them in their prison, and misled people!!! and not true. 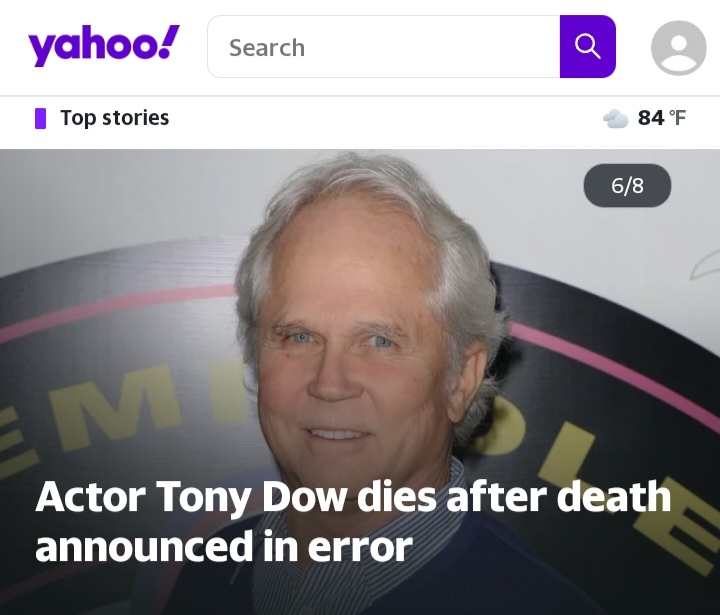 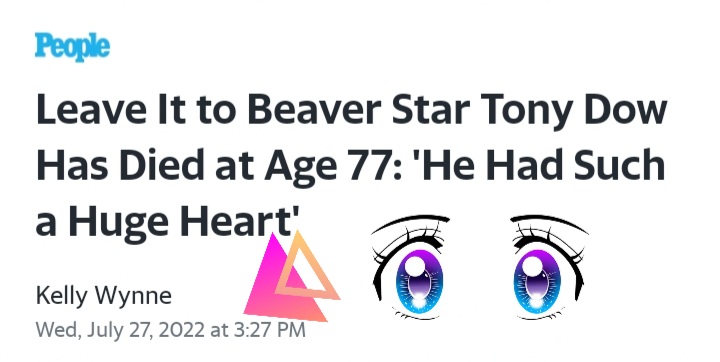 well I guess he did now. 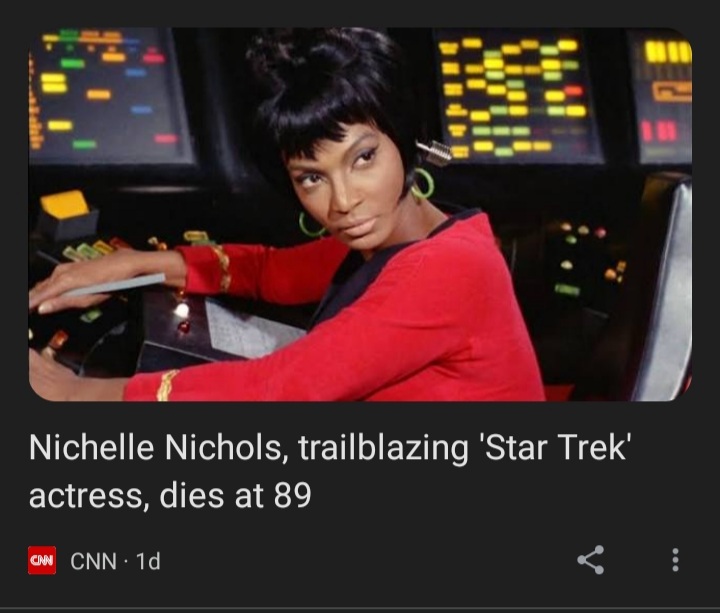 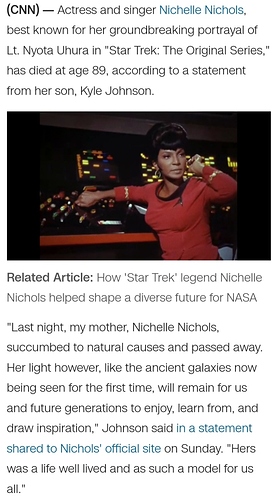 Just came across this sad news: 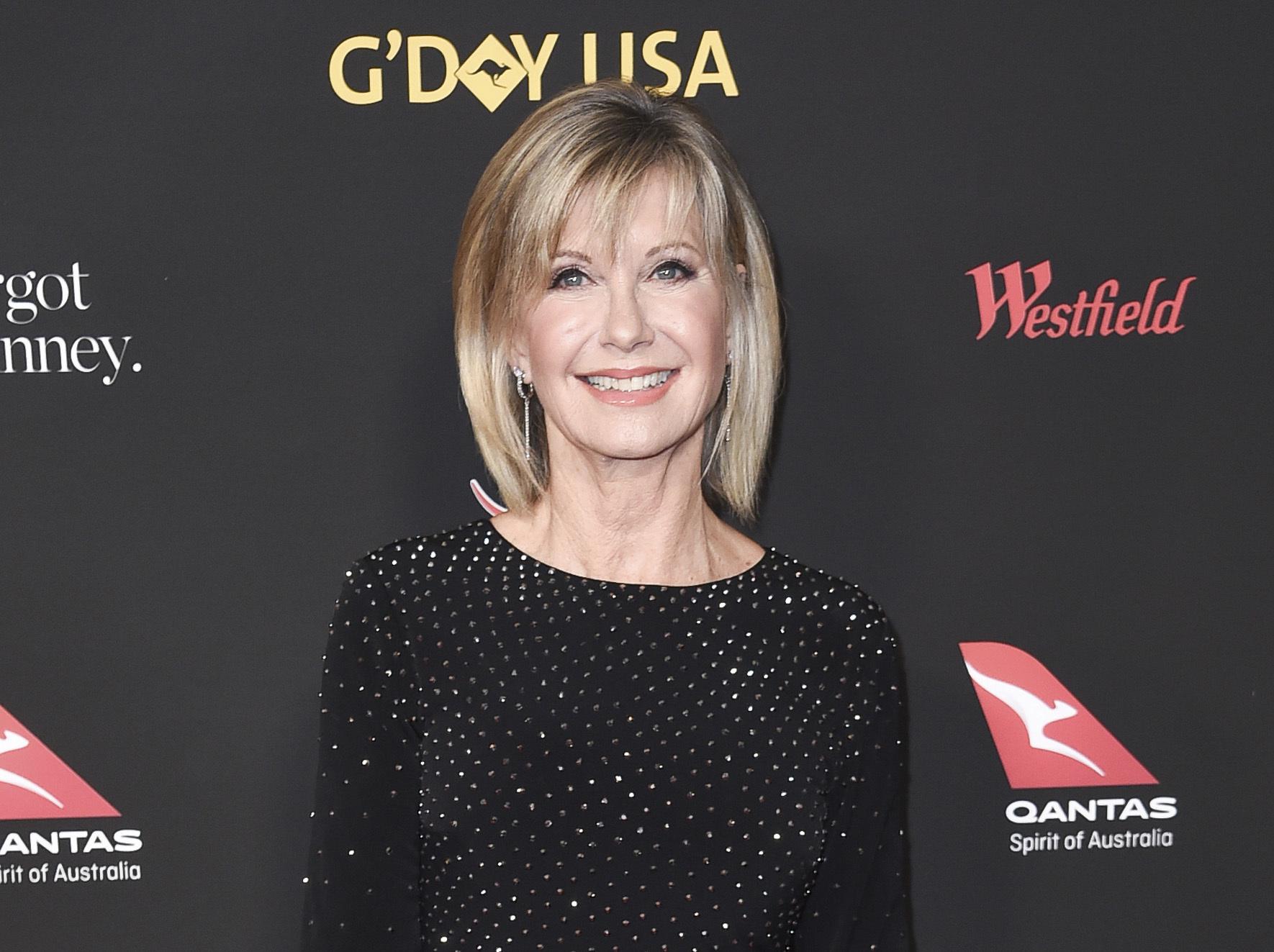 Olivia Newton-John, who played Sandy in 'Grease,' dies at 73

NEW YORK (AP) — Olivia Newton-John, the Grammy-winning superstar who reigned on pop, country, adult contemporary and dance charts with such hits as “Physical” and “You’re the One That I Want” and won countless hearts as everyone’s favorite Sandy in...