I was watching a couple of dramas where I saw this trope again: the dead fish kiss.
You know, the wide eyes, blank expression, motionless.

What drama have you recently watched that featured this dead fish kiss?

I just saw it in an episode in the King: eternal Monarch

the older ones and mamy idol dramas have such kisses xd

Um. I think it’s so little kids can watch and ask their mommies, “Why are they kissing like dead fishes? That’s not what daddy does to you.”

We all know how truthful little kids can be.

@porkypine90_261 laughed so hard at that

I couldn’t look at these kisses there xd

I have a more literal recollection of what you’re describing: 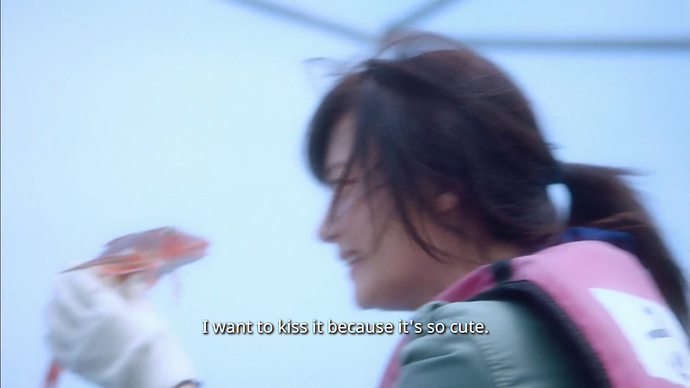 Unfortunately there are some very recent dramas with such kisses.
For instance “Meow, the cat boy”.
And most Chinese dramas (for instance “Mowgli”).
And of course all school dramas, which until recently didn’t have any kisses at all -because of course 17-18-year-olds never kiss, at least that’s what TV shows would like us to think!- so we should be grateful that at least there is a kiss every now and then in more recent shows (for instance “Moments of 18”)

I call that type of kiss the bulging eyes, stiff dead corpse kiss which; Park Shin Hye, it’s an expert in that department. She did it in HEIR, HEARTSTRINGS and FLOWER BOY NEXT DOOR. Thankfully, after so much criticizing from so many people she improved, and in the drama with Hyun Bin (sorry forgot title) she did a great improvement in the kissing scene department.

I mainly blame the Director/ Producer that feels this type of kissing in a drama is acceptable because even Suzy Bae in her recent drama on NTFX did just that! She left her eyes opened for a long while and stayed so stiff when Lee Seung Gi kissed her in VAGABOND, and I was so heartbroken and disappointed with her bc I Detest those kissing scenes and never thought she would do a scene like that. That takes away so much from the drama. To see this hunk kissing a stiff opened eye woman it’s so unromantic! It kills the scene and the sense of a start of a romantic love story.

What can you do? They starting doing this type of scenes all over again, and now is worse bc they are no longer doing the romantic kissing scenes in the ending episode Like ‘‘Love with Flaws’’ for example, and many others I’ve seen. Now with this pandemic things it will get much worse bc there’s no way ANYONE in their right mind, will want to do ANY Kissing scenes (I wouldn’t do it for all the money in the world!).

This virus is highly contagious, there’s no vaccine yet, and getting infected can mean a death sentence for many. Even if people survive this virus they develop heart disease, breathing problems, and not to mention mental health problems dealing with what they went through. Some will suffer PTSD for life bc to be so close to death, and experience so much pain, I can only imagine the ending outcome for some ppl that can’t deal with the nightmares etc…

The future is very dark bc right now this virus mutated, and is not only highly contagious, here in NYC the children are getting ''heart attacks! They are going into cardiac arrest, and Perfectly healthy babies and kids upto 12 year’s old are intubated with covid19. They do recover but with heart problems of course. Newborns are been delivered at home bc the mothers that went to hospital to deliver the baby, caught the virus, and passed it to their baby. Several babies have died which is a nightmare to be pregnant during this trying times. Many mothers have died right after having the baby (so heartbroken). The worst part is how irresponsible all this parents are by not putting a mask on their children bc according to them; ''Kids don’t get covid19 which is so wrong! I HATE watching news and need to stop doing just that.

In conclusion, K dramas, Asian dramas in general, and all over the world dramas, will no longer be able to add kissing romantic scenes bc is playing Russian roulette with your life.

Personally, I don’t mind it when they don’t add any kiss scenes in the dramas they are still filming now or in the near future

. Some dramas actually don’t need a love story at all. When I finished Psychopath’s diary, I was really happy that the leads remained good friends and I also wish they went that route with Itaewon class instead of the forced love line.

I call that type of kiss the bulging eyes, stiff dead corpse kiss

I didn’t have a name for it before, but after reading some blogs and other forums the name ‘dead fish kiss’ was used often to describe this phenomenon, and I thought the name described it accurately and was pretty funny, hence the title

Unfortunately there are some very recent dramas with such kisses.
For instance “Meow, the cat boy”.

Yes, I’m not surprised to see those kisses in older dramas or idol dramas, but I was surprised to see it in the recent dramas, and yes indeed, Chinese drama. They sometimes do this very awkward kiss as well, not quite a dead fish kiss, but it definitely looks more uncomfortable than sweet.

Park Shin Hye is famous for them. You’re Beautiful, Heartstrings, Pinocchio… she even looked absolutely terrified when Lee Min Ho kissed her in Heirs. I’m like girl why do you pick romantic Kdrama to star in?! And why do they pick her where there is quite a bit of romance and kissing in the Kdrama?!

stiff dead corpse I added bc if you noticed in the kissing scene, they leave the hands down to their side all stiff.

I always questioned her behavior during the kissing scenes, and couldn’t stand her kissing scenes so I skipped them since they were so terrible and hard to look at. To this day, I wonder why she behaves that way, and I know there must be a logical explanation for that. Maybe is too personal, and she won’t share it with the viewers to keep her privacy. Whatever it is, it’s affecting her career.

However, I think that if it was a surprise kiss, then wouldn’t he/she pull away fast instead of stand there? If they really wanted that kiss, they should go for it. The worst part is the open eyes–what are they staring at? Don’t people usually close their eyes or pull away when someone gets too close?

If they want the kiss, they close their eyes. If they don’t want the kiss they push the person away or leave the eyes wide open so they noticed the face of disgust when the person ‘‘kissed you’’ Followed by a strong slap in the face! (I do that lol).

However, I think that if it was a surprise kiss, then wouldn’t he/she pull away fast instead of stand there? If they really wanted that kiss, they should go for it. The worst part is the open eyes–what are they staring at? Don’t people usually close their eyes or pull away when someone gets too close?

If they want the kiss, they close their eyes. If they don’t want the kiss they push the person away or leave the eyes wide open so they noticed the face of disgust when the person ‘‘kissed you’’ Followed by a strong slap in the face! (I do that lol).

What if it’s their first kiss? Or just something REALLY unexpected? Then they might be so flabbergasted that they just stand there. Maybe opposite instincts (go for it and run away) kick in, which leaves them doing nothing. They might want it, but be hesitant for whatever reason (fear of being disinherited or something like that, maybe). They might not be sure they want it.
Either way, if they’re really surprised, they might just stand there for a moment …

if they’re really surprised, they might just stand there for a moment …

For a moment, yes, sure. Not the whole damn kiss. And the arms hanging down, lifeless.

It’s a ridiculous trope. The directors need to either fix it or not have the characters kiss at all. Or maybe it’s just a cultural objection? Western sensibilities expect more 'realistic’kissing? Not sure as to why dead fish kisses are so blatant. It’s really dumb - who acts like that in real life?

I’m still not sure whether I have even seen those kisses you’re talking about. I remember the first K-drama I watched took 8 episodes to finally finish the first kiss, which up till then just always got interrrupted before it could start.

And now that I think about it, I did see some actors leaving their eyes wide open out of surprise or maybe even disgust in some cases … but that was usually with a reason, I think?

Give me a clear example, please!

I didn’t watch heartstrings, I only saw a clip online:

Look, I understand if their faces are like that because they don’t want to be kissed or are disgusted by it. Fine, I get it. People say fight or flight, but often forget 'freeze". They freeze in the moment.

You can argue that about when the characters like each other as well… maybe a moment of ‘is this really happening?’ But like @irmar said… the whole kiss? Really? @porkypine90_261 Yes, it is a ridiculous trope.

In my example, the king eternal monarch, the FL doesn’t do the wide-eyed stare, but still does the still, open eyes, motionless kiss. With her character I had expected her to push the ML away or eventually close her eyes, but that isn’t what happened. It felt like I was throw back to the old school dramas for a second. Really odd.