Yeah I find those diets really disturbing and it’s even more disturbing it seems to be the norm so you can say: Hello eating disorder for life.

This has to hurt, they are almost bleeding!: 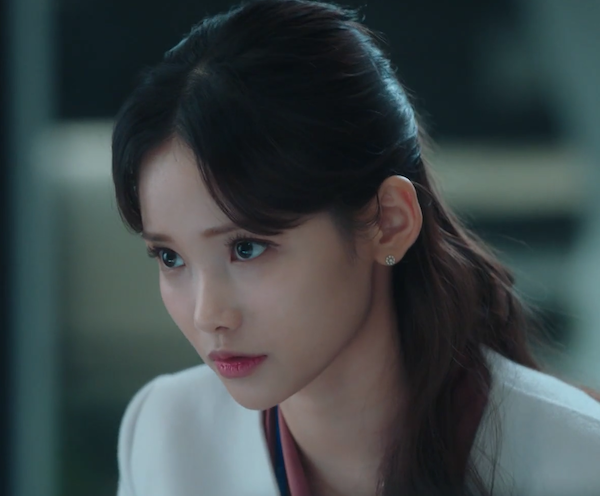 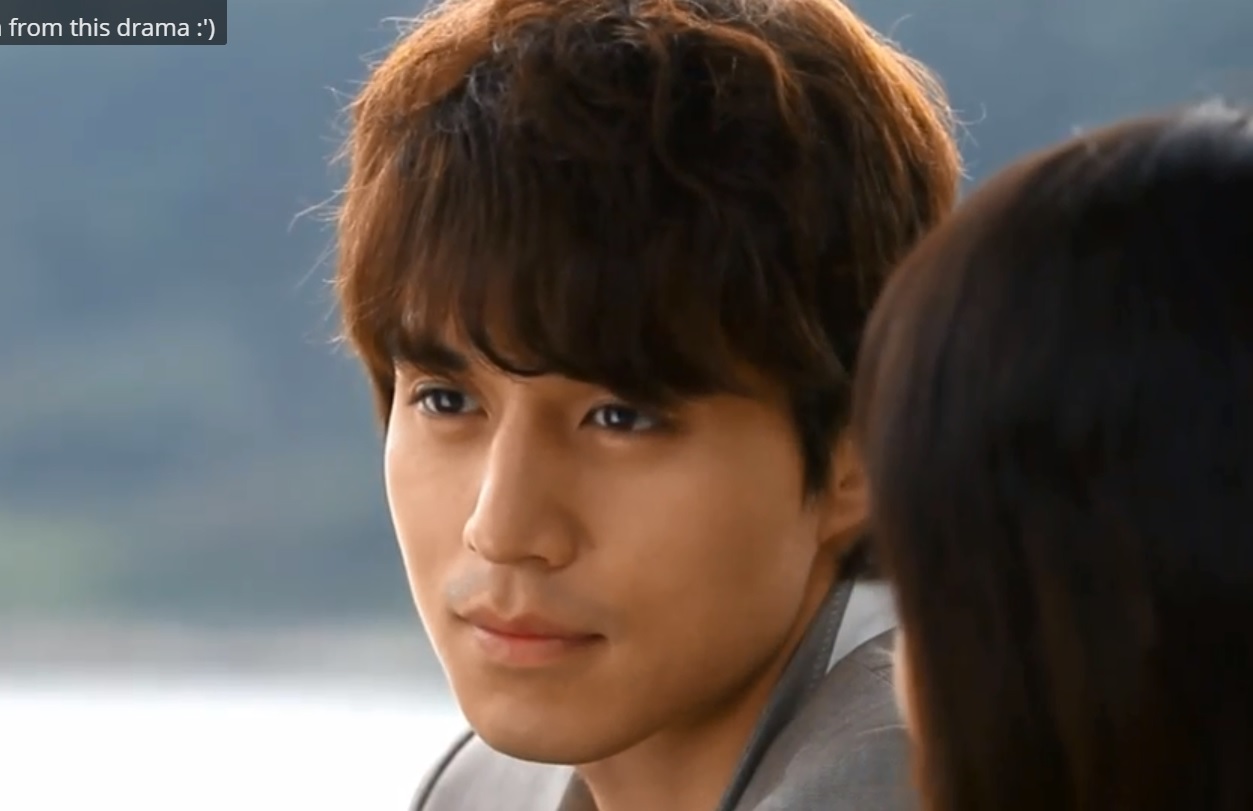 and in a Music video. 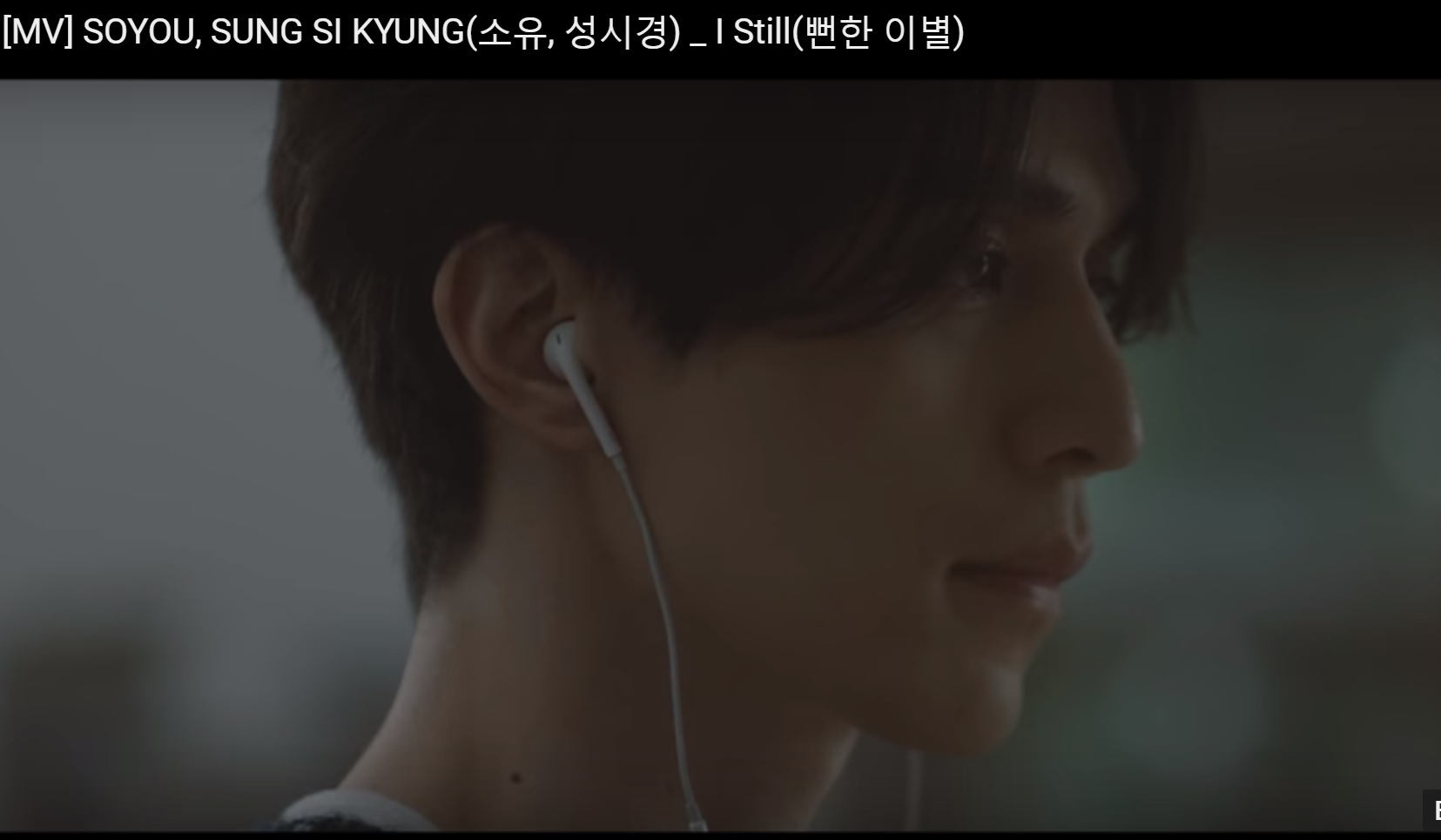 And here is my beloved Yoo Seung Ho looking, yes, handsome, but totally ridiculous with too heavy lipstick in “I Miss You” (where he was … gasp!.. second lead) 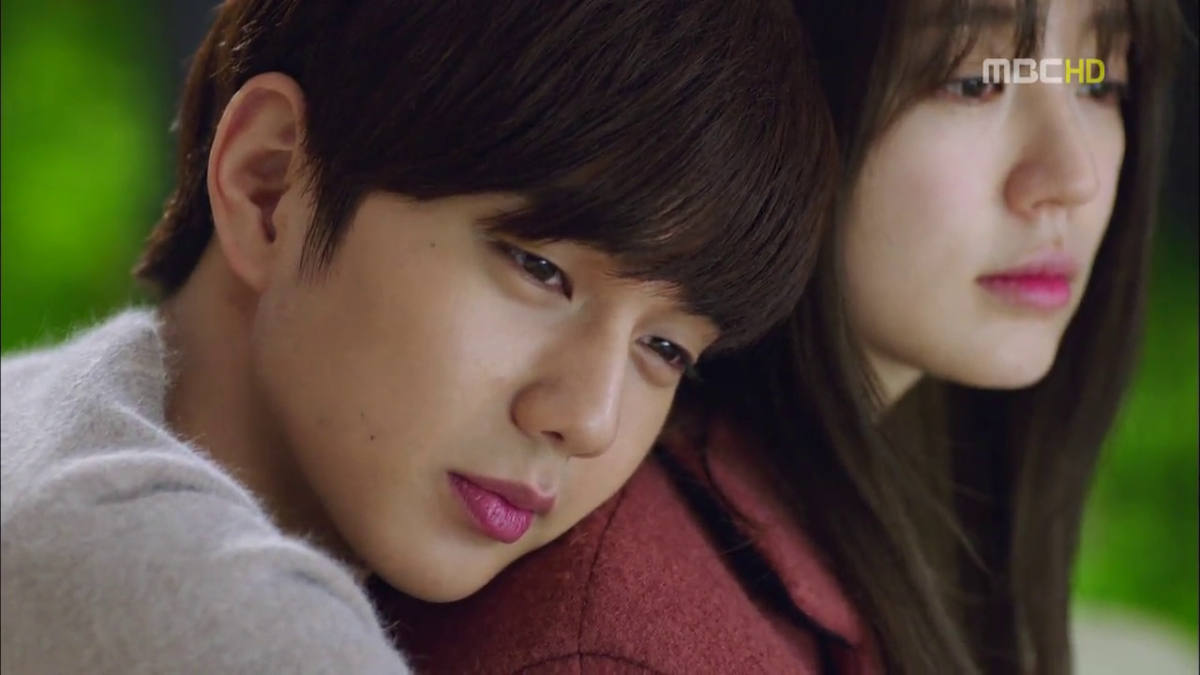 I think this one is the worst

Agree…such a cutey with more lipstick than his love interest next to him lol.

On first sight he looks like a girl with short hair… I wonder if they get payed for using lipstick so obviously, 'cause girls might want the same colored lipstick their Oppa had on?

Sometimes there will be a lipstick concept for ALL characters in a drama. See The Undateables. Not only the main leads and the second male lead, but all the secondary actors as well are wearing orange lipstick, the same shade, in every single episode! Which may be toned down compared to fuchsia, it’s less a punch in the face, but still it’s more unnatural in its own way, because in reality there are people with very pink or red lips, but I’ve never met anybody with orange lips.
And you can also see a “fine” example of female chapped lips here. The poor actress is plain enough as it were, her stylist must hate her. The hair, the lips, the outfits… Why didn’t they pair Namgoong Min with someone more in his league? 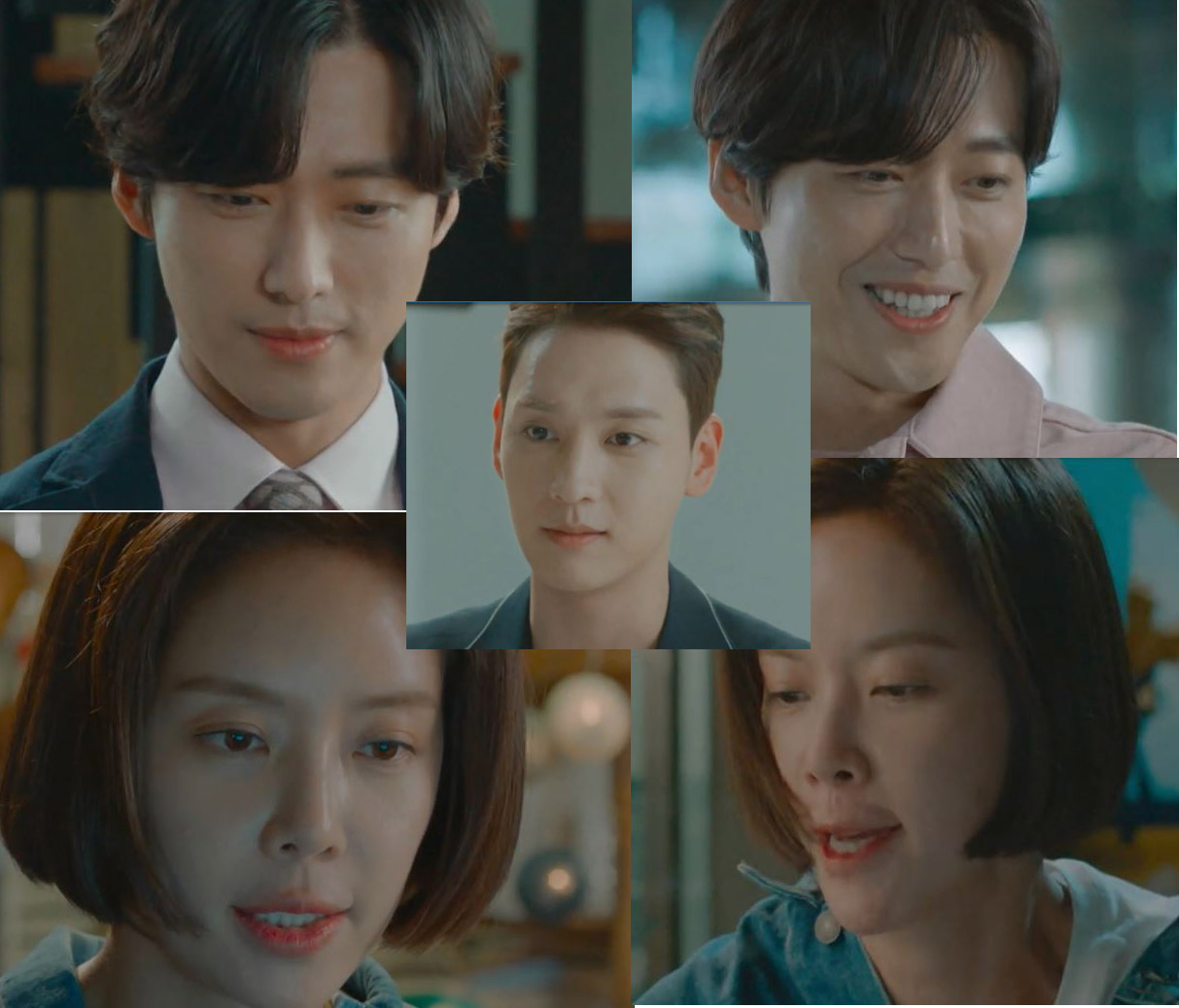 A couple of years back (2012/2013?) they were using a new camera that gave the actors a deep yellow color in their skin

I’m watching a drama from 2013 at the moment and it is indeed like you said. Many actors have this deep yellow/orange coulour, but I didn’t know how that happened. I thought it was due to being in dark places and weird lightning. But now I know why it was like that

I don’t really get the problem even if not natural + they often wear eyes makeup as well.
The only thing is sometimes it’s poorly done. I saw Shindong in SuperTV wearing a very dull fondation, making him look like a corpse. I love pale skin but his makeup wasn’t bright so it looked weird.

(and the ear thing, it’s cute…if they are fine with it no need for PS)

I don’t really get the problem

Well, to each his own. After all there are men who like to go around dressed as women, right?
I personally find it disgusting in a man who professes to be straight and okay with his given gender. But I also understand that the Korean public obviously likes it, otherwise they would not do it in dramas.
Just as the partly coloured lips in women, which I find utterly ridiculous and unattractive. And the flood pants leaving the ankle bare, without socks. And the “clown style” for women’s clothing: baggy short pants with suspenders and some blouse underneath, men’s chunky shoes. But that has been the Korean taste for so many years now.
Fashion things are nothing compared to behaviour such as eating with open mouth, all the contents visible, spitting food here and there etc. (I have learned to not eat while watching k-drama, there’s bound to be a sickening scene like this somewhere). And/or a drunken scene ending in vomit - to strengthen the romantic bond of the two main leads.
However, these dramas were made firstly for Koreans, not for us, so they don’t have to cater to our tastes. If we love dramas and want to watch them, we have to endure it. This said, we are allowed a little rant every now and then, aren’t we? After all, lately Asian broadcasting companies take a lot of money out of foreign sales as well.

I guarantee you, I won’t watch a drama if the guy has excessive eyeliner and lipstick.

I get that it’s your taste in men, and that some people don’t find it attractive.
I was just expecting people who watch drama to have a more open eye on what masculinity can be, I’m a bit surprised. (“disgusting”)

And the short pants with visible ankles is also big in France amongst stylish men, they actually wear very small, invisible socks.

I didn’t think it could be weird haha

But I do agree that some behavior annoys me, unhealthy heavy drinking, or the man that grabs the girl’s arm and drags her around. But wearing lipstick or exotic clothes won’t hurt anybody, it’s on another level ^^

The only thing is sometimes it’s poorly done. I saw Shindong in SuperTV wearing a very dull fondation, making him look like a corpse. I love pale skin but his makeup wasn’t bright so it looked weird.

I agree with you. When it’s poorly done it just distracts you from the performance. Quite a pity.

Also, I don’t know why I forgot this, but in different Asian countries certain groups in society have been known to wear make-up throughout history, f.e. the aristocracy in pre-Korea or even in China. Maybe that’s why they don’t have trouble with wearing cosmetics while countries without that history might see it as weird or not masculine.

And I roll my eyes every time the cliche wrist-grab comes into play. Unfortunately, it still happens way too much in drama’s.

Maybe that’s why they don’t have trouble with wearing cosmetics while countries without that history might see it as weird or not masculine.

During the 18th century in France, Italy and England, aristocrats (including men and sometimes children) used on daily basis make-up to powder their faces, darken their eyebrows or wore rouge on their cheeks. They wore wigs, and glued fake beauty marks. And also used too much perfume, to conceal the fact they washed once in a blue moon and pissed on the palace curtains. It soon spread to the middle classes as well. https://i.pinimg.com/564x/14/2d/8c/142d8cfb248f3c591a2252273474993c.jpg
But, by the end of the 18th century, that fashion was deemed too extravagant, frivolous and effeminate, and started to be abandoned. Actually they went to the opposite extreme, and by the middle of the19th century men’s clothes were dead boring! from 1870 to the1970s men were allowed only neutrals, preferably dark (black, grey, dark blue etc), without any decorations. Yawn!

To come back to your tentative theory, the fact that once men’s makeup was fashionable doesn’t make it less ridiculous for us Europeans to see a man looking like this today.

The trend is changing, though, with the empowerment of homosexuals, the reign of gay clothes designers and style gurus, and the appearance of the so-called “metrosexuals”… Here are some articles:
Why more men are wearing makeup than ever before.
And here one with statistics from Huffington post.
America isn’t ready for men in makeup
Makeup for Men: Fad or Future?
3 million men in UK wear make-up

But I still find male makeup a major turn-off.

To come back to your tentative theory, the fact that once men’s makeup was fashionable doesn’t make it less ridiculous for us Europeans to see a man looking like this today.

Well as you pointed out yourself, make-up got a negative reputation in Europe

Not sure if the same holds true for some Asian countries.
And I’m not trying to invalidate your opinion of male make-up.

Just trying to think of reasons why these cultural phenomenons pop up in some countries, but not others.

Not sure if the same holds true for some Asian countries.

By the way, now I’m curious. In East Asian countries (Korea, China, Japan), surely male makeup was not “a thing” for most of the 20th century, right? Even if it was done in much older centuries. I cannot imagine men in the 1950s or 1960s doing it. Or did they?

I think not, but weren’t they just recovering from the war? (WWII, the Korean War, etc). Also, by that time they got heavily influenced by American (Korea) or German (Japan) culture, right?

I remember doing my history exam (which was a while back

) on beauty in Japan, but I focused more on woman and after WWII it wasn’t even that popular for women to wear make-up. Also, led in make-up was a huge problem.

I would have research that some time

They are definetely wearing lipstick, but based on these few pictures it also seems they color grading with Teal and Orange that results into this bluish orange look. The original lipstick color could have been a little different and more red than orange.

They are definetely wearing lipstick, but based on these few pictures it also seems they color grading with Teal and Orange that results into this bluish orange look. The original lipstick color could have been a little different and more red than orange.

Possible. But if you watch the series, it’s so weird, EVERY single actor has the same tint.

I have a feeling that what’s happening now, is just like what they did back in 2013, using a filter in the camera that gave the actors a weird looking color in their skin. This time the filter must be affecting the lip color on the male actors bc maybe they are using a darker color for the guys. Ironically is always pink for the girls, and it doesn’t affect them that much.

Back in 2013 they started using a new camera that made the skin color look like they had a liver problem bc they looked yellow almost orangy in their skin color. My daughter who worked as a production assistant in a movie told me all male actors also wear heavy make up here in U.S. but they make sure it looks very natural. She laughed when I showed her how the actors look and can’t understand why they don’t correct what she also believes has to do with the camera.

I don’t know why they can’t see that this new dark color lips on male Asian actors looks terrible.