Giving a chance to a rookie x Falling for fake accounts

Also, if you know who the CM in question was who gave a volunteer with zero contributions a Moderator position, I would report that CM to Viki. Not to be mean, but more so that Viki can be the one to explain how things work here. And also for Viki to understand they themselves might have made a mistake to appoint a not well-experienced CM without explaining things beforehand. After all, it all started with their decision to appoint that CM

The smaller languages, where people sub on their own, or with only a few, automatically take longer and shouldn’t be punished for not keeping up with the big teams.
If they don’t start at all, though, I can imagine your anger.

I have a person translating all by herself Word of Honor and she finished within a month after the last episode was released.
Even with well known languages we have teams that just stop or lose interest. I believe if it’s taking too long, really a long time, we should ask if everything is okay. People are waiting to watch and, most the time, I have people asking to help.

If you can’t find any other subbers in a particular language, it probably indicates that the interest and demand for the language is not high. So, leaving the moderator spot empty is fine.

Empty or with a mod the subs still stay waiting all the same. So what’s the point to add a person?

I’d be happy to check on Dutch subtitles

You can add me for the review of German subtitles.

The more I think about this issue, the more I realize it’s Viki’s fault. And here are a few points why that is and what can be improved:

Viki mostly chooses contributors who they deem well-acquainted with rules on Viki.

That may be their goal, but sadly, the reality is different.

I’ve never been a CM so I don’t know exactly what is this job about but in my opinion, it would be nice if for example in project finder they do another section for moderator and co-moderator. The first is obvious but the second would be for projects where the first moderator went AWOL and the project wasn’t touched for a while, then this project might go to this section and maybe some other moderators would like to finish it. But it still may not be really helpful with languages that aren’t that popular.

In my opinion, the beginning of this thread was about preventing rare (and other) languages from being chosen by a (so-called) moderator who simply randomly selected a language to “perform” on.

Is this your round-about way to say we’ve gone off topic?

Hahahha, it happens always, we start with one topic and go on and on talking about other things, I really like whenever someone brings back us to the start.

Unfortunately, you can’t even 100% trust the accounts with over 100.000 contributions. I know one in particular where initially the contributor barely spoke any English and was dependent on our subs to watch series. Just to suddenly start “subbing” herself.

I know. Unfortunately, the number does not always mean quality. Is a gamble through and through.

When choosing the CM, Viki mostly chooses contributors who they deem well-acquainted with rules on Viki. Contributors who have been participating in a lot of projects, have a decent number of contributions and generally haven’t had many complaints from other Viki users.

That is not true LoL I know a few CMs that did a terrible job, to the point a Viki Staff had to interfere, lots of complaints from other mods and viewers, and still got more channels. These could be exceptions to the rule, but I’ll never know. 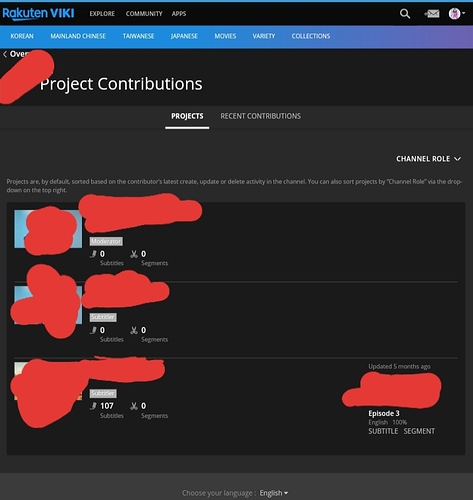 This user is an Indian language moderator,
She is a rookie with just 107 subs.
I wonder how the cm added her.

I believe Xylune was the first person to bring up this issue.

I wasn’t the first to observe them, as I was first informed about said person in May after a big language community had some issues with them. Mainly it was about not accepting advice etc. They became “salty” and started applying for various languages they obviously didn’t know, claiming different things.

Said person doesn’t always use Google, they also just copy subtitles from Youtube. So it’s rather time-consuming to find evidence (e.g. a friend consulted someone who can speak Indonesian and the subs were fine - just stolen from a Youtube channel). On the other hand this person is obvious at the same time. And some languages are indeed rather difficult if you don’t know them (Japanese kills any translator

I’m aware lots of people carefully check everything, and it’s worth it in my opinion (especially if people got removed from teams previously, there can be various reasons).
Personally, I started moderating after a year and I suppose it usually takes some time to get in contact with the language community, get used to things (I made some mistakes as well when I became CM first) etc. So I don’t think it‘s recommended making someone with 200 subs a moderator who starts solo subbing a 24 episodes drama. Will they be able to do it, keep up to the standards etc? That’s difficult to say, especially if you don’t know much about it. Furthermore, there is no need to solo subtitle anything, the community is big enough (though there might be valid reasons for this). For example there’s another project unfinished since February (40 episodes) and the moderator is absent for months in between. If you check her profile you can see though that she was removed from various teams over the years. Probably for a similar reason (and it’s a drama with a famous actor). The problem here is that such half-finished dramas are often not discovered for ages until someone might finish them.

In case of the user with the fake/stolen subtitles they were deleted, returned with the very same name and were added again to the series (for whatever reason, I’m not aware if they claimed it was a bug or something).

What annoys me though are language communities obviously fighting each other. There’s a language where the majority of projects are distributed between 4-5 people and each of them has 10-20+ active projects. If you choose one of them, you receive a PM from another complaining about the choice. Maybe in of them is indeed worse, but how should we know? There’s no evidence provided, except for a comment saying they’re bad. What’s the point, then? Usually you’re not entirely happy about everyone, but as a CM from another background you simply see a bunch of people with tons of subs, tons of projects and nowadays even their applications are equally detailed. If there’s a good reason, alright, but so far it’s not helpful to comment on a decision by stating “you made a bad decision”.

Most of us experienced failure when applying, and sometimes you think it’s not fair. However, can you really prove that there’s a major issue with the decision a CM made? Sometimes we benefit, sometimes we don’t. I often start questioning my applications as well, wondering what they may lack, but in many cases it might be just a coincidence.

There’s a language where the majority of projects are distributed between 4-5 people and each of them has 10-20+ active projects. If you choose one of them, you receive a PM from another complaining about the choice.

Almost all moderators of that language have 50 out of 60 unfinished projects (or another outrageous number like that). Why do any of them deserve the Moderator spot in any team? They don’t.

There is no need to fill the Moderator position on the off chance that this person might like this particular series better than all the other older ones where they are a Moderator. And grace you with their presence when they start translating your project. God knows if they even finish it. Lots of them translate just the first 1-2 episodes to placate the CM. They are playing a game here.

If a Moderator has no more than 1000 subs per project in a smaller language like that, chances that they start and finish your project are miniscule.

In a year time perhaps a new good young moderator comes along. She wants to translate an older drama she really likes. She will be dissuaded from working with a veteran Mod who does very little in her own projects. Why not keep the Mod position open for the promising newbie?

I’ve only been a CM once. And from the skimpy experience I have, applicants back away gracefully when you report to them that they have:

It’s for the sake of the community that these hoarders are rejected from the Moderator positions despite the fact that Mods of that language are in deficit here on Viki. Imagine being the viewer of that language. They must be extremely frustrated!

Almost all moderators of that language have 50 out of 60 unfinished projects (or another outrageous number like that). Why do any of them deserve the Moderator spot in any team? They don’t.

I’m not sure if we speak about the same language. So far I know they indeed tend to finish their projects in the case I’m referring to. Even rather quickly. I’m just wondering what’s the point of their comments except for the fact that they make the CM doubt whether they should accept any of them in the future.

Anyway, it makes it difficult for me as well to trust them if I e.g., ask them how “good” someone is. It’s not helpful in regard to their credibility.

The other matter is more of a “rare language phenomena” though it doesn’t apply to all of them of course.

Recently I reported someone else for subbing by spamming “.” - they were deleted rather quickly.