How do you handle the polite form in your language?

I’ll write this post in English so everyone can understand it even though it’s not a matter of English language.

Languages like French, German, Italian, Spanish do have more forms than just the English “you” so I’d like to know how you decide when you use the polite form and when the personal form (with personal form I mean “du”, “tu”…)

For some characters/relations it seems quite clear but for others it seems fluid or sometimes even not logical, why it is used in a certain way.

Example from a Chinese drama on Netflix (I use this as example because I think it is subbed by professionals).

The drama has a rich business man who is the head of a company, since his father passed away. He is in his late 20’s and has a personal assistant in a similar age who is some kind of right hand for him.

The thing that irritates me is that he uses the personal address (du/tu) instead of the polite form since in other movies or shows (e.g. European/US) the assistant would be addressed with polite form, maybe with first name instead of surname, but usually not with surname + first name + du/tu…

So how do you decide for your VIKI projects which form you use?

East Asian cultures are very attentive to hierarchy and status levels. It is very usual for a boss to use the casual form for their employees. Even if they are older!
I can only talk about Korea, because I’m not really familiar with Chinese and Japanese culture, but I know that the concept is very similar in all of them.

Levels of politeness in speech - Korean

So it seems that there are many levels of politeness.

And I may be forgetting some, since all these have their nuances.

What is the situation in my language?

I work with Italian with Greek.
In Greek we have two forms, casual and polite. Period.
In Italy we used to have three styles, in rising formality order.:
tu - in Roman times, there was only this. You said “tu” even to the Emperor. Nowadays it’s the most casual address.
voi - came with the French, it’s like the plural of you, and was used until after WW2, when it was dropped because Mussolini favoured it. But my grandma in the 70s also used it when she spoke to the maid and the greengrocer, and many old people in the South still use it. It’s dying, though. We use it only for historical times.
lei - came with the Spaniards (translation of "usted’). It means “she”. Strangely enough, it’s used to address a person directly, even if it’s a man. Because it implies “Your Highness” where highness is feminine. You speak to your teacher to ask him something and you say to him “She thinks that my work is good?” Yes, I know, it’s mind-bogglingly absurd. For many centuries, it was used alongside the “voi”. Voi was for ordinary respect, and “lei” was for very high-up individuals like a governor or higher.
Nowadays that “voi” was buried, “lei” is used in all instances where you don’t use “tu”. But “tu” is gaining ground, shop vendors will address casually even a mature client. I snap at them when they do so, did we know each other as children? They are young enough to be my children or even grandchildren, so what’s with the lack of respect?

What I do for dramas?

In Dutch you have:

The lines of when to use them is a bit blurry though and differs per Dutch speaking country.

For example “u” should be used when speaking to people who are elders (or significantly older than you). You also adress your parents this way (although in the Netherlands, it is now more common to call your parents by the casual “jij”) and strangers (again, now it is common to call them “jij” from the start).

I also used to call my bosses “u”, but they all demanded that I switch to “jij”. I guess hearing “u” makes you sound old. In Belgium and other Dutch speaking countries however, “u” is used more often than in the Netherlands.

I adhere to the customs that I grew up with for the dramas I moderate, since I tend to do Chinese dramas and Korean sageuks.

And it’s not only a question of “polite form”. English doesn’t have a “polite form” as such, but there other ways in which it shows respect and formality. For instance, look at this example in a Chinese period drama (it’s a romantic comedy, but still!)
I wondered if it is still unedited. But I saw all 22 episodes are translated in English and released, since many other language translations are there. And this was only episode 3.
(Titles are messed too, the crown prince at times is called “Majesty” and then “Highness” etc.) 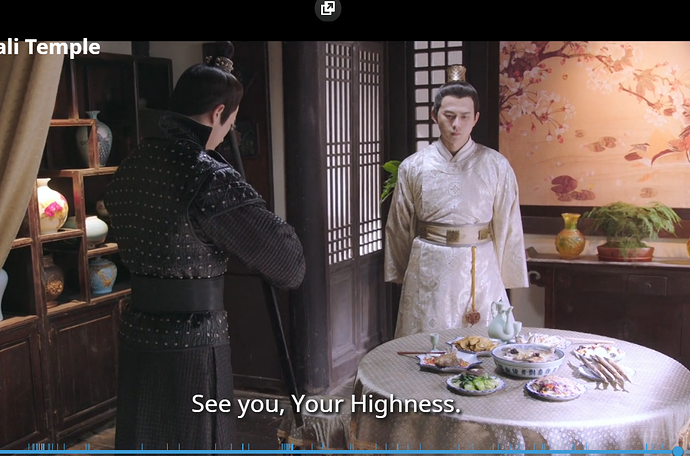