aaaaawww, I know you are righjt destiny and all. but gosh! come on! the guy form the star, to be sure there was a better way, and yes the mermaid I guess the same thing, still there had to be a better way!!

I’m re-writing My Love from the Stars and Water God and Meow the Secret Boy -
It is the fantasy ones that STINK and are ambiguous. I was ok with Goblin.

Start with [Love from the Star] but don’t change the whole story completely @porkypine said re-write the ending. Hope you don’t forget if he stayed here on earth, he would have died bc he can no longer live here on earth. Plus, I hope we don’t forget he yearned to go back to his planet, to his people, his family, which were also alive and well. waiting for him. What will happen to her since she’s human, she will age and he being an alien would never age? How can they possibly stay together?

I think fantasy dramas should be excluded here, but dramas like DOOM that ending, in the floor making kimchi, and that mess they did on those 2 last episodes is what I call an injustice. Too cold, too unfair to him ML, by leaving him with no wedding to celebrate. If they kissed during some of the episodes why omit it at the end?

I hated GOBLIN ending, but I didn’t watched much of it, to the point I can’t remember much at all. Doesn’t the girl die?

Start with Love from the Star

I was only going to do the ending - so that he isn’t popping in and out of her life! But maybe she likes having her free time!

I actually like how he became a member of the family! Yes a kiss would have been nice but they did so many good kisses I was ok with it - I liked the meaning behind the ending.

It is mostly the fantasy dramas that need fixing

How you do that? I just hit reply and you already had answered me!

I’m out of here. That feels weird.

Because I’m sitting here reading this thread and I reply when I see it! I’m making dinner! Hamburger and Rice my EASY dinner!!! I CANNOT see what you are writing only your ICON - I PROMISE - I’m not a SPY

You may not be a SPY but something is not kosher here. lmao. Bye…

Someone would have to remind me how they explained his ability to come back in the first place. I don’t recall the explanation for that, or even if there was a proper one, but I remember thinking it didn’t really make sense. He had waited 300 years to catch a ride back to his planet, but now he can suddenly just appear at random?

And I feel like fantasies would be some of the easiest to rewrite because you are not necessarily beholden to any hard and fast rules. He came from an alien planet that we know nothing about, so maybe by the time he had gone back, they had developed some new technology that allowed him travel back and forth or even take his whole family with him to Earth, and maybe they had developed some new medical intervention that could help him survive on Earth. Because we know nothing from the beginning, we can make up anything we want in order to ‘fix’ the issues presented in the original. Everything is up to the imagination.

I was thinking there was a device or once he went through the worm hole back to the other world he was think able to go back and forth - I want to rewrite it so I have to rewatch the ending - the popping in and out drove me NUTSO - she would never know how long he would be there! I mean HOTTIE Alien - stay with me for gosh sakes!!!

Well, according to my understanding he would not be able to come back to her again, and that would be the last time so it had a different ending in the sense that with time she would have to get married and have her own family and remember him as a first love. He was part of the star planet that would extinguish if he kept coming to earth. Maybe I paid too much attention to that drama bc I found it so PERFECT ending and all.

@my_happy_place
You answered your own question. The times kept getting shorter and shorter; as his ability to come back were getting so slim and risky, but he managed to give her one last passionate Goodbye kiss at the prime of her life as a Rising Star that is why the drama was titled [He Came From The Star] at the site where I/me saw it.

(answer to question below)
|
|

But he DID keep coming back to her, didn’t he? Am I remembering that wrong? The time in between kept getting shorter and shorter, and he never knew how long he could stay, but he kept coming back.

It is mostly the fantasy dramas that need fixing

Fantasy dramas are like WordBliss etc. If you’re stumped, just leave, and return, and the cloud will roll away to sunshine. 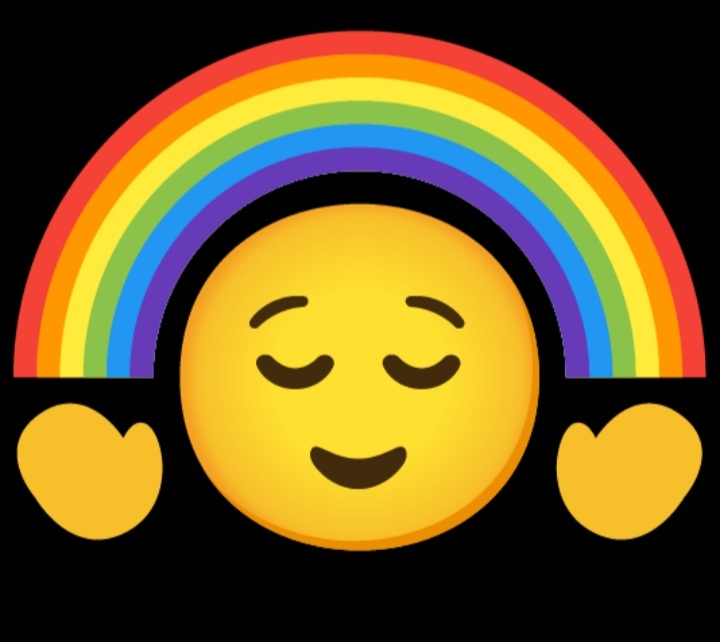 will roll away to sunshine.

Not in our Dali Temple and it was so GOOD until the last 5 min!!! UGH UGH UGH

but he kept coming back.

Yes - they were on the patio in a lawn chair at the end. He keeps popping in and out and she never knows when - if he had left for good - she would have married the 2nd lead but that was not what happened.

The times kept getting shorter and shorter; as his ability to come back were getting so slim and risky

Not to belabor a point, but I think you misunderstood me. I meant the times in between his visits kept getting shorter and shorter and the length of time he was able to stay got longer and longer. I was wondering if my memory was really that far off, so I looked up some episode recaps and videos, and it is clear to me now that he did in fact keep coming back and when all is said and done the show leaves the impression, through their TV interview, that his coming and going will continue indefinitely. I am not sure what you are referring to as the ‘one last passionate goodbye kiss’. If you are referring to the big kiss at the movie awards show on the red carpet, that was just the first time he returned after he originally left, and the beginning of all of his subsequent return visits.

Ok this will be my last comment on this subject in this thread. I noticed here at viki.com there is a part I see (other site) that I don’t see here.

For 1 year 2 months he shows up for seconds. If you call that them being together, I respect that. But I saw the ending differently, and it was as followed…Sometimes when she was sleeping, he was looking at her, and she wakes up, hugs him and seconds later he’s gone. She’s gazing at the stars while he was reading and when she looks again, he’s gone.

There is a part where she talks like they are narrating their LOVE story she says; BECAUSE EVERY MOMENT (SECONDS THAT IS) THAT WE ARE TOGETHER, COULD BE OUR LAST, THAT MAKES EVERY MOMENT PRECIOUS.

I didn’t see that here at viki, but I see it at the other site and interesting enough China gave it a totally different ending which I don’t care to know bc I read ppl hated the changes.

I’m also not arguing with you what you saw that I saw differently; nor I’m trying to convince you to see it my way either. End of subject on my part.

If you call that them being together

I don’t, actually. That’s why I do not consider this one to have a happy ending even though some people describe it that way. Who wants to only see the love of their life for a few fleeting moments here and there, never knowing when and for how long? Honestly, that sounds more like torture to me than a happy ending. And it’s why I, like others, would rather have a different ending.

Interesting. I wonder what changes they made. I watched the Filipino version, and the couple even got married in the end, during one of his visits back to her.

If they kissed during some of the episodes why omit it at the end?

THIS RIGHT HERE is what I hate about some dramas. They kiss all through the series but suddenly become sO miserly at the end!! I don’t mind if they never did more than a press-kiss or a hug and the drama ends with another press kiss. But if they’re happily kissing throughout the drama and then SUDDENLY stop, it makes the end so unsatisfying!!

waited 300 years to catch a ride back to his planet, but now he can suddenly just appear at random?

I also don’t remember clearly, but they had lots of space-related nonsense talk about wormholes and stuff… like he has to pass through wormholes to get to earth but they align only sometimes… something like that idk I hated their explanation.
This is why I avoid fantasy dramas where one character isn’t human. There’s always an unsatisfying ending. Though I think Angel’s Last Mission has a good one, I was just not patient enough to see it

**drama obviously can’t have a very happy ending. And if that wasn’t enough, the writers end it with some space-related nonsense so that FL and ML keep getting separated for years, then meet for days/months, again get separated, repeat.**I seem to remember her saying she would wait and wait for him to come. Spend whatever time she had with him and then wait again. He keeps coming. The time in between got LONGER, in my memory. At the very end, I remember her saying “he stayed for a few months this time”

According to Soompi, they had a happy ending 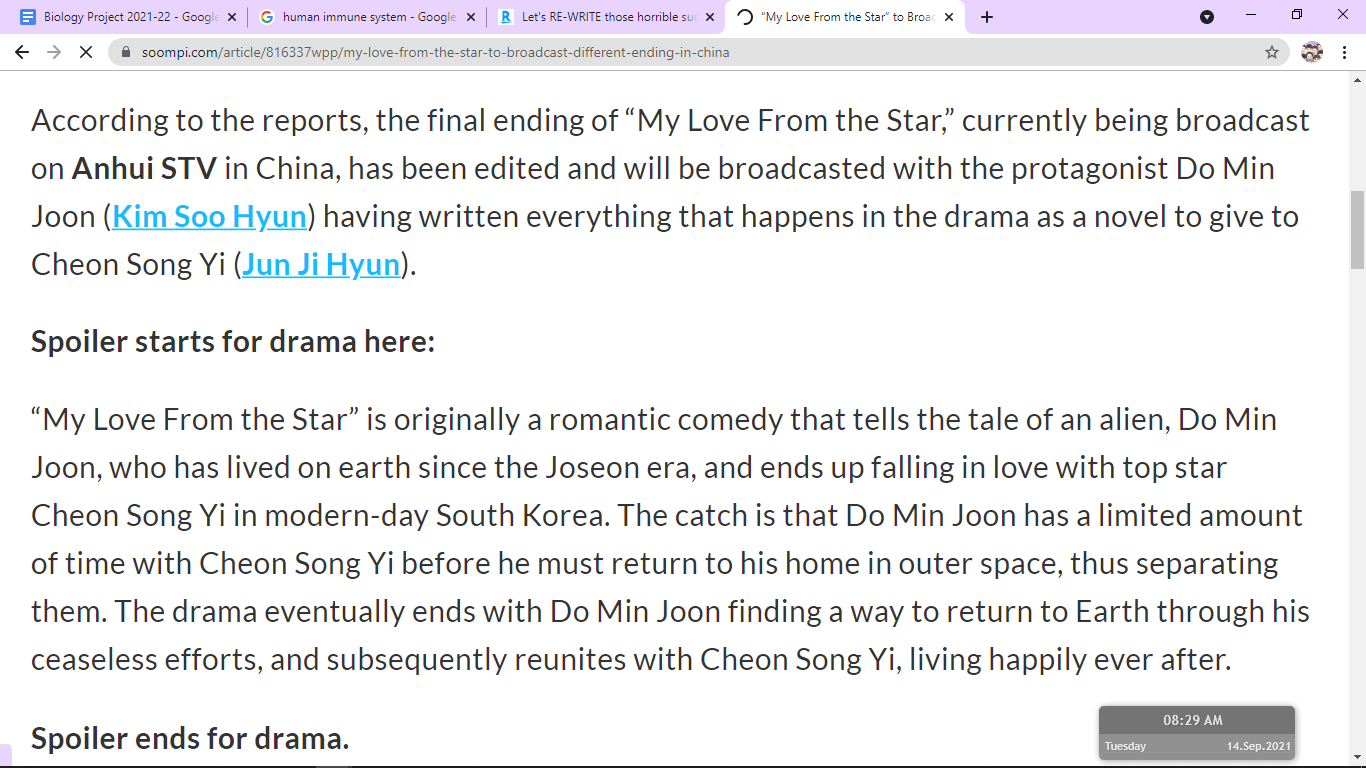 I had completely forgotten any mention of wormholes. I watched the Filipino version much more recently, and I feel like they gave no explanation as to why he could suddenly come back and continue to keep coming back, he just did.

I would agree that this is my experience in most cases too, but there have been at least one or two with which I was satisfied. The funny thing is, it is fantasy, which literally means a writer could make up anything to explain any situation because it’s all ‘fantasy’, so why do they have to be unsatisfying?

One fantasy I liked was Ashes of Love. I wouldn’t call the ending “sucky” or bad, it was actually perfectly satisfactory. I think I got mad because I just wanted them to kiss. I wanted payback for all the angst they put me through.
I loved it so much because the characters are BOTH deities. They BOTH become human. So even if they died and made me cry pools and oceans and drown in my sadness, they usually came back.

why do they have to be unsatisfying?