hadn’t watched most of the dramas in the first one…second one I recognized all I had watched! It was a really cute one!

yeah animated pictures are so cuteee. especially the picture from w where they were eating ice cream by crossing their hand. i really liked that scene and when i saw them in animated form, i felt a sudden happiness and that scene came to my mind

ooh, here’s another one: Which K-Drama Would Be Your Worst Nightmare?
I got ‘Come And Hug Me’, so I’d rather not watch it ever

Your fear of being confined and not being free would make “Save Me” your absolute worst nightmare. Im Sang Mi is desperate to leave the religious group that she’s a part of. The leader of the group gives her the heebie-jeebies and she’s living in constant hope of escaping. The worst part is her family has been bought into the cult

I did this quiz today and amazingly enough my character falls into Suzy Bae Seo Dal Mi. I’m so happy my adopted asian daughter and I, are in tune with each other. lmao

THAT’S HOW I REALLY AM.

You’re Seo Dal Mi! You’re unconventional and a little quirky, but you know when it’s time to get serious. You have big dreams that may seem far away, but you also have the courage to work towards them, even if this means breaking away from the traditional “safe” path. And your determination means that once you set your sights on a goal, you won’t stop unitl you’ve achieved it!

wow! it’s really cool when you get your favourite character as your soulmate lol

You enjoyed Start Up so much it’s making me want to watch it!

The first episode is a tear jerker, but after that I really loved it. I honestly watched episode 2-16 twice skipped episode 1 bc watching it once is enough lol

He was my favorite charachter

You’re most like Han Ji Pyeong! You can be a little brusque and aloof at first, but underneath you’re secretly quite soft and caring. You’re driven, focused, and no-nonsense, which makes you not only successful but also great at giving advice and motivating those around you. Just don’t be afraid to listen to your feelings and let out your soft side more often!

Oddly enough, I loved every main character in that wonderful drama bc they were so perfect for their roles. I don’t have favorites bc they were all so special to me in that drama. it was a drama about loving, caring and working together to help others. They were simple loving human beings (except those nasty CEO father/son combo which were nasty and the 2 twins/ criminal developers too) that btw they don’t get arrested or charge bc money bought the law. .

Glad you liked it so much

I did have some issues with a couple of the characters, but it’s mainly due to the writing and maybe also the directing. But Han Ji Pyeong and Won Deok Halmoni were written the best in my eyes

I concentrated mainly on the logical aspect of the drama in the sense that Nosan and DalMi were childlike so they complimented each other so well. They had no ambition but wanted to help others with all their might. Their goal in life was not to make money but use resources to help as many ppl as they could.

I was hoping Mr. Han would hook up with DalMi’s sister bc they matched so well. They were ambitious with money, knowledgeable in business deal, CEO material, very cold like, incapable of showing emotions until it was too late. Mr. Han waited till the end to show interest in dalMi, and Dal Mi’s sister waited until her poor grandmother lost her sight before coming to see her, and show she cared for her too.

I thought we would see DalMi (pregnant she wasn’t why? they got married for a year already) and Nosan walking hand in hand (they did), and Dalmi’s sister and Mr. Han hand in hand looking like a couple ‘‘all lovey dovey’’. Most asian writers always fail to give a complete ending, something is always left with no closure. It’s not like we’ll ever be able to see season 2 they never make a second part (as far as the ones I’ve seen that deserve a second part).

I was hoping Mr. Han would hook up with DalMi’s sister bc they matched so well.

That would be kinda weird

Not really; remember he never made a move on DaL Mi in front of ppl. He confessed to her during a lunch with no one else around. She obviously didn’t like him, but was very appreciative of his caring nature, she treated him like he was way older than her although he was only 3 years older. One time she called him ahjussi and after that Mister Han.

The sister was 3 years older than Dal Mi, and I know that Dal Mi would give her blessings and would be so delighted that both can love each other, and not be so miserable and lonely. The story would be different if they ever dated or kissed it would be weird/awkward but that never happened.

Which K-Drama Trope Do You Need In Your Life Right Now?
I got a back hug with THIS picture: 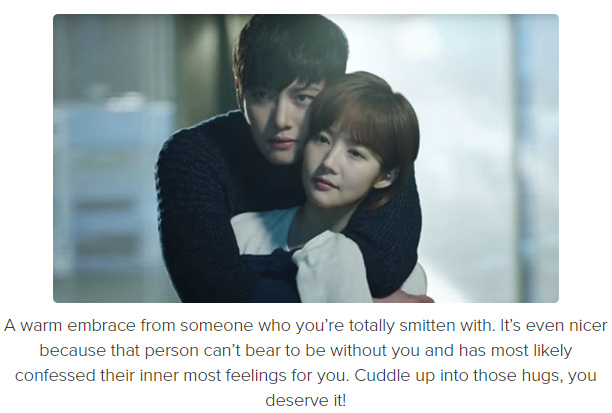 You got heartfelt confession!

Be prepared to have butterflies fluttering around in your stomach as someone is head-over-heels in love with you. They will go to the ends of the earth to make sure that there are fireworks and flowers when they confess their feelings. Make sure you get it on tape and replay it when you’re feeling down!

Yea! I get to quarantine with
Sung Hoon
Park Seo Joon
Nam Joo Hyuk
Park Hae and those guys are so goofy it would be hilarious!

And my BTS ?? alter-friend - counterpart??? is always Hobi. He’s a barrel of fun too.

Blood type? I forget, but I think it was wrong…

Oh! I haven’t seen that kissy one… lol BBIN a minute with those results.

You’re tired of the same old routine and you’re sick of the same old problems. It’s time to put yourself in someone else’s shoes — someone of a different gender! Like many a lead character before you, you could really benefit from a quick spin in a whole new identity, whether it’s to escape from gangsters or just to get a fresh perspective on life (we really hope it’s the second one). The great thing about putting on a disguise is that it gives you the freedom to step out of your comfort zone. You might find that, once things go back to the way they were, you’re happier in your own skin than you ever were before.

Your taste in K-dramas is pretty youthful. You like classics, but especially love a good K-drama with all the cliche tropes. You’re also guaranteed to watch the series if your bias or anyone on your bias list is in the cast! You might not like to admit it, but it doesn’t matter too much if the script is good or bad, as long as what you like is included!

(Yea. That’s true. I WILL watch if one of my favorite actors is in it.)