Yeah me neither. It’s sooo popular those days but I really don’t like it. One thing really make me feel disgusting is 456 is kind to everyone he met in the game, especially 001. But when it comes to his mom, he suddenly became kindless. I cannot understand when he stole his mom’s money (or even cancel her insurance) to gamble, why isn’t he kind at that time.

Like I said earlier, if you win you get the prize, if you lose, you die! yes its a terrible one, and don’t know or understand why its so popular, and now another season??? wow, there must be a lot of hate floating around!!

456 is kind to everyone he met in the game, especially 001. But when it comes to his mom, he suddenly became kindless.

I agree with you.

and now another season???

I can understand why there’s another season as they left a lot of questions to be answered, including the relationship between the main guy and the old man. They should also explain more about the Front Man and the recruiter guy (Gong Yoo). I am also hoping that the main guy (and maybe the cop who may have miraculously survived from the shot and the fall?) will somehow stop this game permanently.

I read that second season will take long although some parts are being filmed already. They want to be able to cover every part without leaving unanswered questions. I read an article that second season is more geared to destroying this deadly game, that has caused so much pain to so many families. I saw expected release of second season as of 2024, but we all know that greediness might make them to speed up things. Money talks bu**ht walks and they are really making good money with this so controversial movie.

https://www.instagram.com/p/CWeqb6ahMCH/?utm_source=ig_web_copy_link Squid game reference you will be shocked hahahhah

Squid game is dubbed into my language

Do you have a video of it?

I didn’t watch but videos were posted on sns 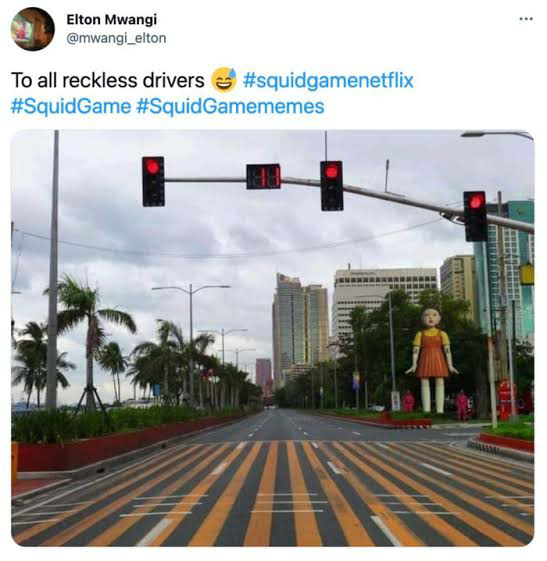 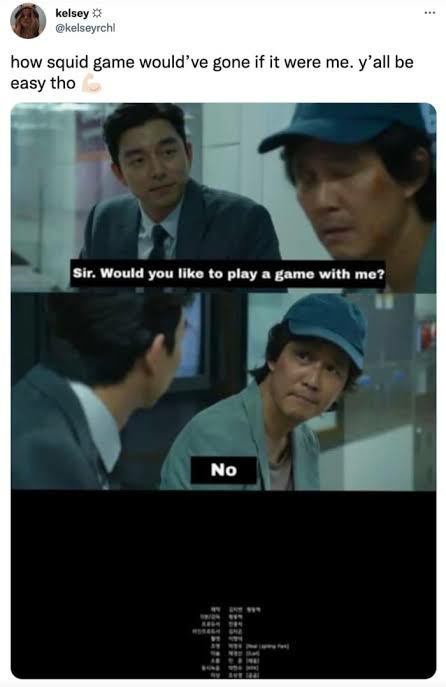 I didn’t like it either but not because it wasn’t a good series but because that is not my genre.i prefer romance and and comedy and the ancient series.
This was to dark for my taste

This is hilarious! And the eyes! lol
I would’ve been so distracted with the sound effect through since I know what it says! lol

I know I’m really late, I hope noone has answered that before me, because then I will be late AND stupid

I prefer being one of those things at one time

So in Poland we say:
“Raz, dwa, trzy, Baba Jaga patrzy” which translates kinda into “One, two, three, the Witch is now looking at you”
So one kid is a witch (it’s more like a fairy tale word, not exactly a witch, but I don’t know what would be closer) and the rest is pretty conventional. Those, who get caught moving must go the beginning line and the game ends, when someone touches the Witch. Then the roles switch.

Hahah I think they know what the doll says (not in Korean of course).
I didn’t say this before, and I don’t remember when they said it, but one of the questions was about squid game and all of the teams answered correctly. So I think they know of the series