I know that translators, of Asian languages in particular, often encounter difficulties in translating particular words or phrases into English simply because there are no equivalent English words.

I’ve always wondered why there are no English words even to describe certain family relationships. For instance, “brother” or “sister” can be younger or older. In Korean, we not only have different words for younger or older sibling but from whose perspective the term is being used. When my kids were younger, they used to refer to my dad as “just papa” and their paternal grandfather as “other papa”. When speaking Korean, there is no need to add on “in-law” or “on my father’s/mother’s side” because we have separate terms to describe most of those relationships.

I am sure there are many other such examples.

In Dutch it’s for a huge part the same as in English, but we have for example:

Translating those into English or any other language that does make a difference between a niece/nephew and a cousin, can be problematic if the context doesn’t tell you enough.
And translating “cousin” into Dutch gives us a similar problem. Is it a boy or a girl?

Translating the Dutch (or English) words for grandmother and grandfather into Swedish can also be an issue, since Swedish makes a difference between grandparents from mother’s and from father’s side:

I guess we could say that all languages lack … or maybe they’re just not easy to match. But therein lies our challenge.

You’re absolutely right that all languages lack in some manner thus putting heavier burden on us, the translators. That’s why I originally had the topic title as “The English language lacks…” but I guess the dots somehow got lost in the system.

English is actually not so easy language to translate from and especially when you don’t understand the source language.
In Hindi, we have genders for verbs, “masculine”, “feminine” and “neutral (often plural)”
For Example: “어디 가?” translates to “where are you going?” irrespective of the FORMALITY used in source language. For people who don’t understand Korean and simply translate to Hindi, they might not know that the sentence is actually informal. The standard says, this should be translated in Hindi to “aap kahan jaa rahe hain?” which is formal male.
The same English sentence can be translated to a variety of Hindi sentences.
aap kahan jaa rahen hain? [formal male]
tum kahan jaa rahe ho? [casual male]
tu kahan jaa raha hai? [informal/rude male]
aap kahan jaa rahin hain? [formal female]
tum kahan jaa rahi ho? [casual female]
tu kahan jaa rahi hai? [informal/rude female]

Then relationship pronouns are too general as well in English. There is no distinction between mother’s brother and father’s brother until they mention maternal/paternal.

I almost forgot, but yes. In Dutch we also have to wonder whether we translate “you” as “je/jij” (informal) or “u” (formal).
And I do recognize the Korean polite and formal forms, but Korean has a much more advanced politeness system in their language than Dutch does.
Plus, the rules for when to use formal/polite language differ from language to language, so even if the source language is formal, one might choose to use informal speech in the target language or vice versa, cause in some cases it otherwise wouldn’t sound natural.
Oh, formality is a pain!

@twinkling and @mirjam_465, when you add the cultural aspect to the gender and different levels of formality we have to consider when translating, it really gets difficult. For example, the English speaking viewers may question why I don’t simply replace “Sister-in-law” with a proper name. However, Koreans generally refrain from using first names so for me to replace “Sister-in-law” with a proper name when I translate would be culturally incorrect, at least in my mind.

when translating from Korean-English I’ve seen people opt for either using the name or just write ‘Noona’ or ‘Hyung’ and let the audience figure it out themselves. So I guess the choice is either keep the Korean culture and let the audience get used to it or switch to complete western culture?
Personally, I find the ones that make you get used to Korean culture better because anyway we’re watching a Korean drama and a lot of the choices the characters make are also depending on their culture (lots of western people have HUUUUGE discussions over here because they don’t understand WHY the character did what they did).
ahhhh culture– beautiful but hard to translate!

you’re doing a seriously amazing job! when I think off all the effort you all put into this, I’m really really grateful

On dramas for which I am chief editor, we are subbing what is heard. Whether it is the person’s name coupled to the appropriate Noona, Oppa, Unni, Hyung or if the title and the name are not both in the dialogue, then we sub what is said. So if you see Oppa alone, the proper name alone or Oppa Chang Wook, in English, that is what is being said in Korean except for the placement of the title. Because the “norm” in Korean whether it is referring to someone or addressing someone directly is proper name followed by title. In English it is title followed by proper name so that is how it is subtitled into English. Seo Mun Jin Sajang may be said in Korean but I switch it to President Seo Mun Jin. Some people have protested and suggested there should be an exception for familial words but I prefer being consistent in naming conventions.

I agree with you that the placement of professional titles should follow the western norm and I like your general rules for subbers to follow with regards to the use of pronouns and proper names. I think most viewers of K-drama are familiar with terms such as Oppa, Unni, Hyung, Ahjussi, and Ahjumma. The ones that trouble me are the long, awkward pronouns such as Sister-in-law, Brother-in-law, Father-in-law, etc. that impact the fluidity in English sentences. My personal preference is to keep the pronouns instead of replacing them with proper names but would the viewers get annoyed in a 16-episode drama?

I agree on the “formality” part and also, the western alphabet lacks “other letters” if you know what I mean

What does “-shi” and “-nim” mean when they are addressed that way? I think it’s pretty cool. I don’t think there is anything like that in the English language…

In Dutch it’s for a huge part the same as in English, but we have for example:

Translating those into English or any other language that does make a difference between a niece/nephew and a cousin, can be problematic if the context doesn’t tell you enough.
And translating “cousin” into Dutch gives us a similar problem. Is it a boy or a girl?

Ohh don’t get me started! All my cousins have children, all girls, and my brother doesn’t have any yet. So I once tried to translate the term “achternichtje” to tell someone how that cute little girl was related to me. I thought of the term “second cousin” but that was weird to me because well I cannot explain. I gave up and now I just with “daughter of my cousin” but “achternichtje” is faster still…

What does “-shi” and “-nim” mean when they are addressed that way? I think it’s pretty cool. I don’t think there is anything like that in the English language…

The way I understand it.
-Shi is just added to everyone, a youtuber once said it can mean as various things like a “hey” but not sure if that’s correct. If you are not close you use the last name +shi, if you are closer and you know the first name+shi. And if you are closer you can use hyung, oppa, noona, unni.

-Nim is a more respectful way to adress someone who’s older then you or who has a higher rank such as your boss.

Correct me if I’m wrong…

I agree that Unni, Noona and Hyung are much more endearing. As to “ssi” and “nim” in conjunction with proper names, they are both titles to show respect, especially during conversations. However, I’ve heard couples using “ssi” during arguments to show that there is a distance in the relationship.

I am not a big fan of the terms “first cousin, second cousin, etc…” myself. I think even worse is the term “removed”. So when I hear “my second cousin, twice removed”, I just give up.

I am not a big fan of the terms “first cousin, second cousin, etc…” myself. I think even worse is the term “removed”. So when I hear “my second cousin, twice removed”, I just give up.

I did Google Translate just now and now it says “grandniece” ehhh I’m no grandma yet so how can a 6 months old baby of my 35 year old cousin be my “grandniece” or ehh “grandcousin”.

All languages feature their own complexities and particularities, so I wouldn’t say that any one language lacks anything.

In Hangul, for instance, namdongsaeng (남동생) is a combination of 남 which is male and 동생 which when taken together mean brother. I suspect the younger part comes from 생 which is student, so someone young, still in school.

It’s the same with yeodongsaeng (여동생). 여 for female with the added 동생.

Of course, you can just use dongsaeng (동생) so as not to specify one’s gender, just that you have a sibling or someone younger whom you consider your sibling.

When you break it down like that, you realise that it’s the same in English. By using adjectives and nouns and sometimes the Possessive case, we get: younger brother, younger sister, my father’s younger sister.

Of course, it’s always important to remember that family relationships, in general, are super complicated, as they adhere not just to a one’s vocabulary, but also to one’s culture.
Fortunately, it’s now easier than ever to communicate and learn from each other.

my husband is guilty of this, I used to just say " Cousin" but he’s “into the tree” so moving forward when I would introduce a relative to him, I say " …my cousin once removed etc"

Reading this, I just realized that we don’t have any word for cousin in Hindi

Instead of that, we mix two words to get the word for cousin and that too is different for different relationships.
One simple thing is to just call your cousin either brother or sister. And if that does not help in any way, then place the relationship with your cousin in front of brother/sister.
As in, father’s brother’s son. This is not the actual translation. It’s confusing actually

The word is चचेरा भाई (chachera bhai), here bhai is brother and chachera is a word related to chacha which means father’s younger brother.
Ugh, it took me a whole Viki discussion to realize something that is absent in my language

@adrianmorales, I have explained earlier that the original title for this topic was “The English language lacks…” but the system wouldn’t allow the dots to appear. I agree with @mirjam_465 that all languages may lack in some manner. Since I am a Korean-English translator, I was merely hoping to open up a discussion and share some of the difficulties encountered by the translators because there are no equivalent English words. I did not in any way mean to disrespect or pick on any one language.

So when I hear “my second cousin, twice removed”

To me it kinda sounds like: “I already had a cousin, so I removed the second one.”

I did Google Translate just now and now it says “grandniece” ehhh I’m no grandma yet so how can a 6 months old baby of my 35 year old cousin be my “grandniece” or ehh “grandcousin”. 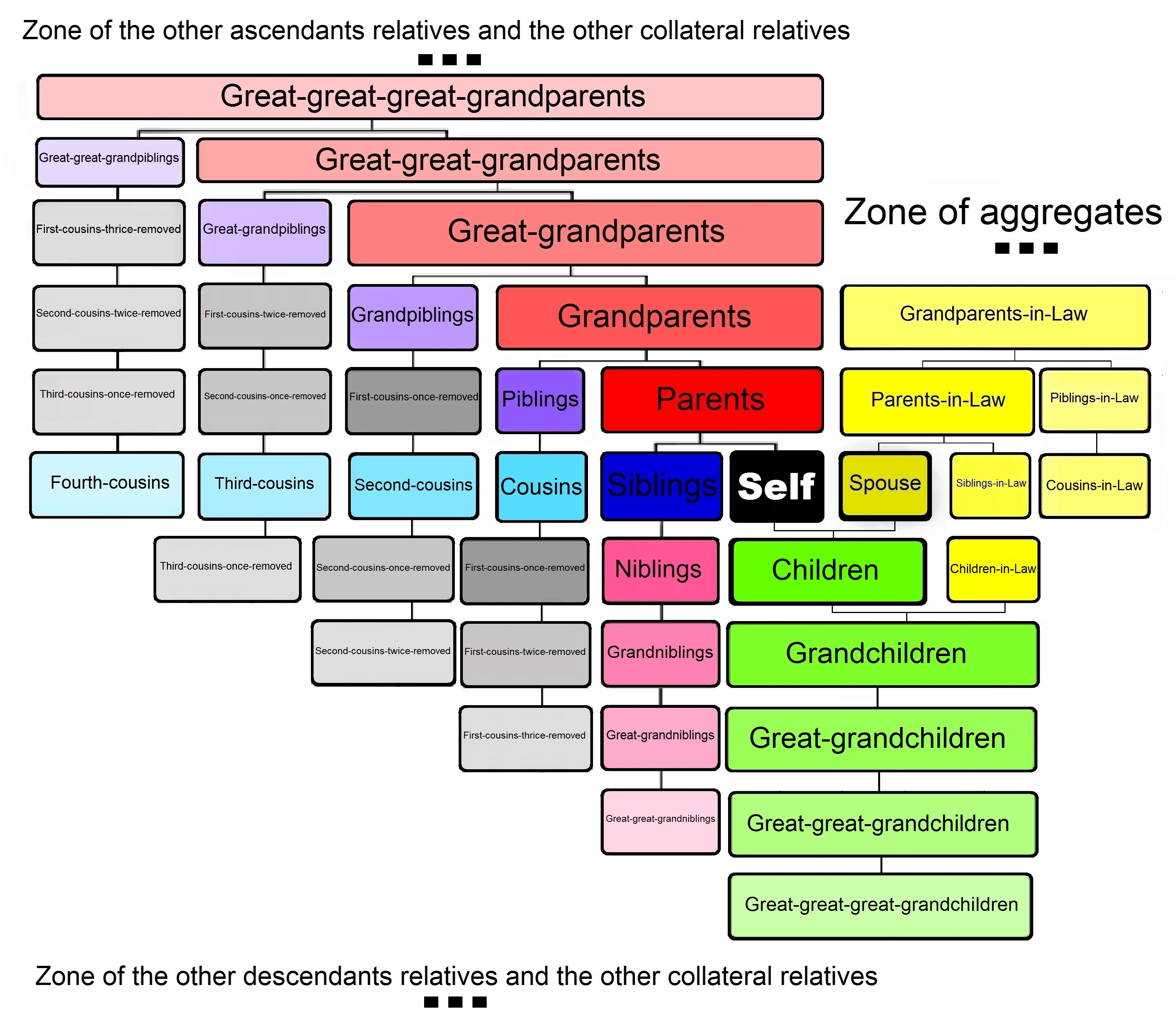