Oh my goodness, our fictional world is so beautiful! I love all those locations.

@kdrama2020ali found an exterior shot that we used for the cafe, 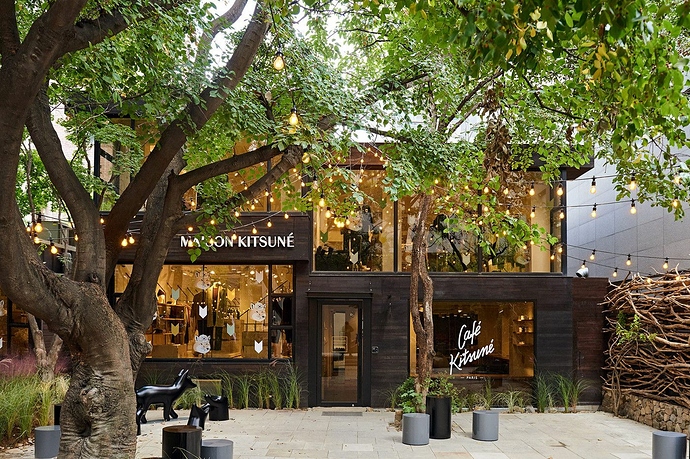 and I’m not sure the interior is as fancy and elegant as the one you chose. I’ll be on the lookout for what seems fitting.

Oh you can remodel it whenever you like… this IS Dramaland!

My Baby Bird Cutie University! Hmmmmm…does it look like that or modeled similarly to Hogwarts

And since I bought the Hottie Penthouse with my frugal savings @misswillowinlove thus entrusts me to be frugal…let me review ur designs & get back to you.

I’ll come visit you, by all means, it looks so chic, like a feel-good oasis.

I don’t know about Hogwarts but it’s a real university… one of the “Big Three” in SK, part of SKY (Seoul, Korea, Yonsei) 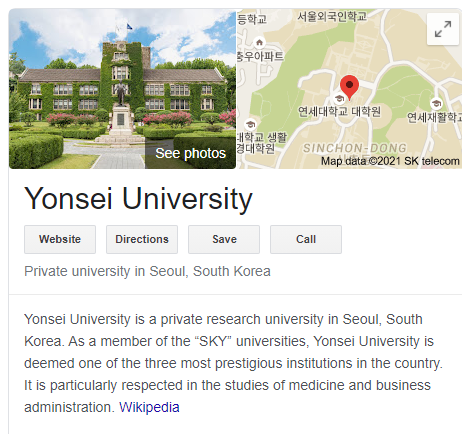 This is @leerla73’s reactions, she’s dwl, and she doesn’t even recognize her own voice. She thinks to herself, is that what I sound like as a character? 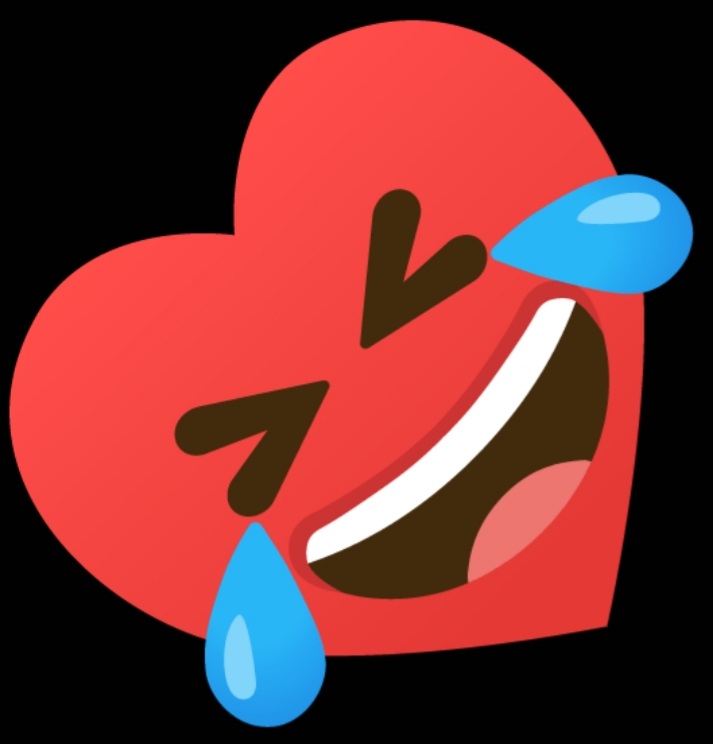 Screenshot_20210830-031350_Messages.jpg713×744 43.3 KB
Her reactions continues, she’s both impressed beyound words, and in shock at the creative juices taking on life at Badger Productions.

She also wonders how po’ po’ PD-nim is handling all the changes after he’d put in so much work at the get-go?

Suddenly, the door crashed open, or better said, someone crashed through the door, taking it off it’s hinges. Startled, everyone shot a fearful glance towards the door’s remains.

In gasping breath, the intruder, who turned out to be porkypine, got out, “Get out now! No time for stairs! Through the window! The white truck of doom is heading this way! THROUGH THE ROOF!”

The Bikki Stix in Miss Willow’s mouth dropped to the floor while she stared in open mouthed surprise. Onion-sama was quicker to respond."What do you mean the White Truck of Doom is approaching? We’re on the 12th floor!

Smartly, Vivi was looking out the window to see if she could survive a jump and noticed the window washers platform. She yelled, “Hurry UP! We need to get out!” as she opened the window and scrambled out.

Porkypine bounded past Miss Willow and Onion-sama and dove onto the platform. Finally they snapped out of it, quickly following onto the crowded washing platform. kdramagirl staggered close behind carrying a small safe.

Suddenly the brakes let loose on the washing platform. It hurdled downwards toward the rapidly approaching street. Porkypine glanced up at the brakes and saw the Kami smiling at them. “Ok you guys. Please stop this platform. We didn’t wreck your home.”

The kami giggled, “What will you give us prickly one?”

The Kami giggled and slowed the platform to a nice soft landing.

Above they heard a tremendous crash. The windows blew out of the 12th floor, raining shards of glass. The nose of a White Truck of Doom teetered on the window ledge threatening to tip over. “RUN!”

Everyone scrambled for cover as the White Truck Of Doom started falling.

Questions for next week’s episode:
1: Does the White Truck of Doom squash anyone?
2: How on earth did that truck get onto the roof?
3: Now that the roof is smashed to smithereens, how will porky build a rooftop garden for the Kami?

“Originality,” she snapped, "is the least of your worries. You have not done one standard, boring, easy-to-account for thing since the start of this project.

MissWillow chases PD-nim around his desk with a roll of grey duct tape in her hand determine to start an office coup. PD-nim ls watching every move MissWillow takes, ducking left and right to maintaining his position on the opposite side of the large oak desk. PD-nim, like all people in positions of power is not willing to be duct taped to his office chair and wheeled into the cleaning cupboard of revolution. 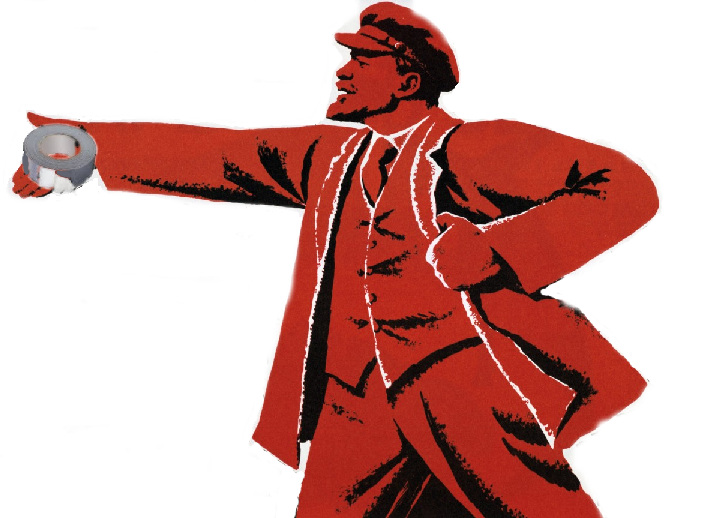 Revtape.jpg720×518 112 KB
“What do you think is happening now?” he questioned, studying every twitching movement of MissWillow’s “We’re creating the rough framework on which the writing dept can work on.” he insisted, shifting quickly left and right. He takes out a few pieces of paper from his pocket as evidence and pick out one in particular and throws it into the center of his desk as if he was playing his hand in a card game. MissWillow stops moving and in a momentary truce looks at the paper.
“If we had gone with Vivi’s two ugly duckling idea” PD-nim continued, “It would at a stoke give a fundamental idea what sort of drama we’d end up with, all very serious and dealing with emotions, morals and judgemental society. I doubt if Vivi would be pleased if we then add magic, time travel or aliens, breaking her framework. I think we should pick a fantasy as the first project of Badger Production, it will allow us more wriggle room to not have to restrict things to close to real world physics, we can let whatever imagination we can come up with run wild.”
PD-nim pulls out a confetti of white paper and throws it on top of the two ugly duckling draft like a sprinkle on a cake.
“She was about to resign over things like that and it took the concerted effort of @leerla73 and @porkypine90_261 to convince her otherwise.”
“As for winging it, that part comes naturally with our imagination when it comes to refining the plots, I’m winging it all the time trying to keep Badger Productions running.”
He selects another piece of paper from the fan of paper in his hand and throws it into the center of the table like his next play in the card game.

And what about the “other” guy? The eternal K-drama triangle needs that other guy. And he needs a cool name, too.
(Only please do not let him be either worse or better than the ML in his various qualities; let him be about the same because I believe in SML liberation!)

“You have been defining some rules to the overall story arc yourself, for the Kami-sama story, at the rough draft level, I had to have two male characters that were not romantically connected with the couple and therefore rules out the eternal triangle trope, the draft just needed to fit two male characters for the bromance to be written for them, hence the two shamans were idea for that, either brothers or two business partners in the shaman business. What makes it a bromance would come later as the plots are refined in what they do in the course of their dealings with the power of the Kami.”
PD-nim turns to @vivi_1485 and tries to form a strategic pact with a neighbouring warlord to quash MissWillow’s revolution.
“Hang on to your concept of Dramaland, It’s more important to you than you realise. It works in your favor with not having to deal with all the geo-political clap trap that is going on in the world right now between even just the main drama producing countries (C, T, SK, J).
I’ll go with I’m Not a Robot simply because that is my favorite. So a semi fantasy/hi tech drama.
Or maybe take some tropes from one and mix with another to come up with something different, such as aliens (Love from the stars) and hi tech in the concept from Ancient Aliens that the advancement of mankind has been the work of advanced alien intelligence.(

)
But let’s say we stick purely to the fantasy/high tech theme. We still need to have some kind of overall arc to work within. Like no supernatural themes like living to 1000 years, gods/ghost, inventing a time machine to include time travel.”
He turns back to MissWillow, “You can start with defining characters and giving them the most wonderous names with the intention of having the most romantic love story every between the ML and FL ever and write event around them but without some basic framework for them to either have that romantic plot development or the bromance, only to have… oh, I don’t know, something quite improbable,like one of Vivi’s white truck of doom somehow landing on their heads killing them instantly.”
PD-nim hears frantic running footsteps, looking round he sees @porkypine90_261 running across the writers dept floor, script in hand.

The white truck of doom

goes everywhere, especially with the kami around

@porkypine90_261 has breathed even more life into the original

started by @misswillowinlove her very self! 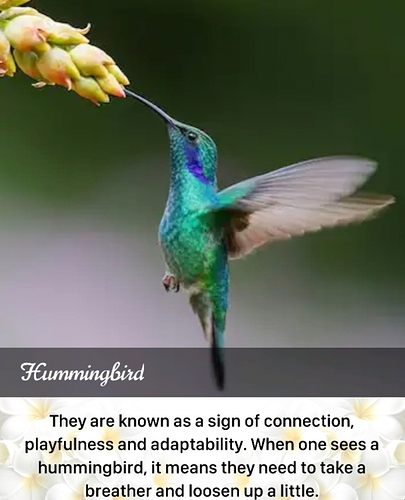 @anthonyparker80_342, you’ve been tagged by Badger Productions. Where this journey takes us, we’ll all find out together, a’hem @ninjas_with_onions, @misswillowinlove, and all writers, take a look at his post below, pssst! Including the video link!
(*❛‿❛)→

Where in the he-double-toothpicks did you EVER find that MV? Hilarious!

Country kdrama! And the lyrics were so on point! And Park Seo Jun’s shrine!

Found it in Facebook group based in Kenya , sub-Saharan Africa is a HUGE K-Drama market.

Ooh, yeah. That means more and more Hotties can casually drop in the office.

I am so bad with names. I’m good with faces. But then how much good would it do here for me to say constantly, “How about using that guy, the one with that face?” Then we’d end up with a cast of millions . . .

This is a cool idea. If I could hire a Korean architect, I would certainly have a library at least as big as Badger Productions’ proposed library.

But how big a neigbhorhood? Districts vary in size.

Miss Willow/W/Oo/우 needs many more food venues than the average imaginative Viki-ite, yet she must not be made to walk too far so that she can run back to the office to make sure OSPD-nim is not stealing her snax.

As you can see, it’s all about Miss Willow. Universites, parks, bridges, luxury penthouses, offices, all the bustling life of an imaginary world . . . yeah, whatever.

If she is given the option of donating to create a scholarship at the University of Hotness or of buying more snax . . . Well, we all know how that’s going to play out.

Born in Texas, raised in Virginia, I am a country/folk fan from way back (thought not as far back as 1395). Because of the crushing sarcasm, OF COURSE it is absolutely not a Koreaboo, obsessive, don’t-you-have-a-rea-life-kind of video. (How yucky to have a YouTube channel devoted to being totally delusional.)

But who wants to bet there are people out there cutting out pictures of Park Seo Joon to make paper dolls, saying, “That’s just self-hating Koreans with nothing better to do. I hope they suffer fan [as in cooling device] death tomorrow!”

Fortunately, reality of a real kind exists here on Viki. In fact, I would say Viki provides such a clear, thoughtful universe for Viki fans to inhabit that it is almost impossible for Koreaboo-ism to exist . . .

You keep changing your title and changing into different people. Should we start calling you Snape-ahjumma? 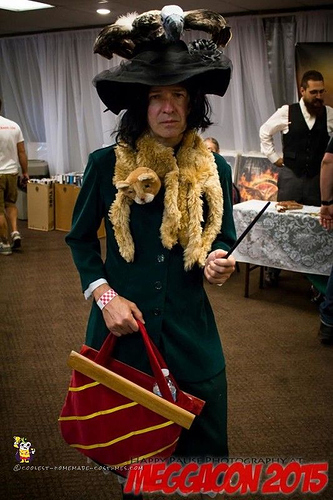 Yay! The white panel truck of you-know-what. (Can’t say it or somebody will have a meltdown.)

Kami are benevolent but mischievous toward those they recognize as benefactors. So once they recognize that they are not in danger, how much might the be willing to help out a struggling mortal to keep a promise?

Would a kami be willing to majorly manipulate the natural world in order to help out the humans who are, after all, fairly inept at doing anything a kami would find useful?

Or would “our” kami be willing to scale down expectations and to share living quarters with a bonsai?