FL lead and her career of translating and subbing for film.

I should definitely check out Run-on! I didn’t know there was a drama with a ML whose job is a file translator. That sounds interesting.

I became a pastry chef.

Yum! You should check out My Lovely Sam Soon.

@ajumma2 In Golden Time 이선균’s character supplements his income as a medical resident by subtitling American drama into Korean.

I watched it twice. First I was looking for Siwan dramas,

then I wanted to see just her story. It seemed pretty real life if freelancers work from their bedrooms. lol Thanks for the recommendation too. I’ll check it out!

It’s from 2012. It would be interesting to compare the difference in generations.

I often have this internal conflict with how words/phrases are translated as well. Which is not the subbers fault. I know that sometimes there isn’t a literal translation. I’ve had this problem when subbing myself. When a character uses excessive obscenities or when they use an abundance of informal nouns, it’s difficult to choose an equivalent English word/phrase.

In Golden Time 이선균’s character supplements his income as a medical resident by subtitling American drama into Korean.

Yes, I remember! That’s one of the reasons why I agree to sub that drama! haha

A BIT off topic but perfect example how one word(subtitle) can affect a SCENE/SENTENCE in a drama/movie, and also can affect other people’s translation in their respective language.

In this case the scene was also ‘‘affected’’ in a sense because according to the subtitle the ‘‘desperate crying lady’’ is saying this ‘‘word’’ that makes absolutely no sense at all by stating; ‘‘the heaven is so inattentive!’’ [the heaven is so inattentive].
I’m sorry, but the editor here; has no clue that the correct word should have been [UNFAIR]??? The heavens it’s so unfair/injusto. What I have heard said by crying parents/family members when they have lost a loved one; EL CIELO ES TAN INJUSTO. Why? Some say GOD IS SO UNFAIR (but that’s another example in Spanish!) DIOS ES TAN INJUSTO. I KNOW in an ASIAN drama the word GOD would rarely or more like it would not be used. 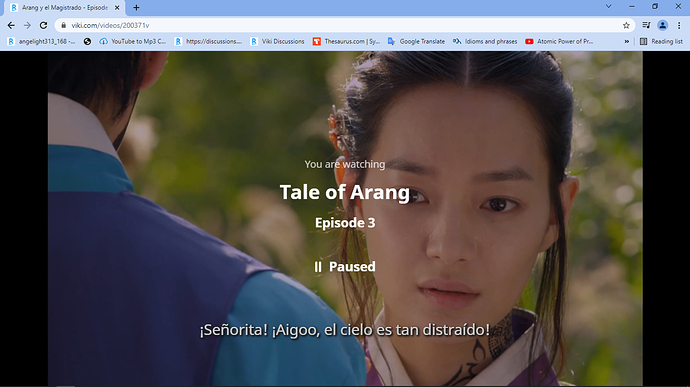 image.jpg1366×768 239 KB
So in Spanish the subber here instead of using his/her common sense, and say: I’m not writing that word that doesn’t belong there bc it makes no sense being there. DISTRAIDO.(in english this would be translated as [DISTRACTED] not [inattentive] [INATTENTIVE] really means INATENTO or NO PRESTA ATENCIÓN. 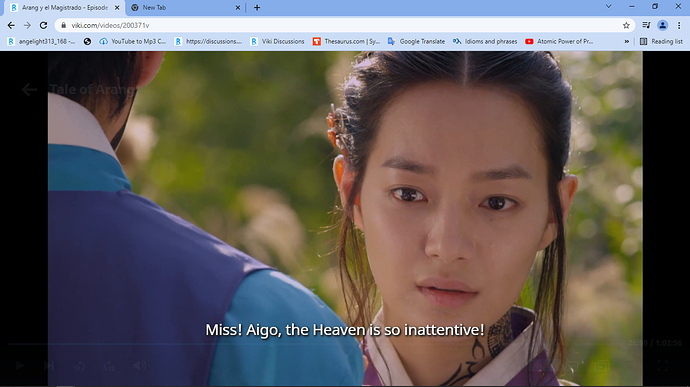 PS. This drama needs a new editor to fix the so many incorrect words used in a Joseon era. At one point one of the male character is called a ‘‘mama’s boy.’’ I doubt in that era they used such word that sounds so out of place in that drama.

Very interesting. I thought people worked in teams? Clearly not on this one,

I have an off topic one. I still can’t get over how funny it was . In Kingdom on Netflix a group of men were riding horses. One shouted out “Giddy Up”.

I had to rewind it to make sure. lol What would be a good translation for that situation in the 16th century?

Don’t get me started. In the past, I have seen so many like that on NTFX, and I laughed my head off from how funny some translations are in some old time dramas/movies. Sometimes when I’m bored, and although I don’t like the drama, I’ll just watch the drama/movie just to enjoy the crazy subs/translations they added there. It can be funny and make you laugh wholeheartedly, and you know the saying…’‘Laughter is the best medicine.’’

people worked in teams? Clearly not on this one

They do, but sometimes there are different subbers subbing different parts of an episode. If there’s no proper list of terms, names and other things, the subbers use whatever they see fit. And if the GE isn’t attentive, different parts may have different terms.

I agree with @ajumma2 about observing the tone in which the word is said before deciding on the English word substitute. Lately, I’ve been seeing way to many dramas that just substitute the F word or the B word for every insult there is. I also have a question:
Is b*tch the only word there is for the phrase “이 년아”? Sometimes I feel it’s too harsh when it’s just friends talking…

I don’t know where to put this, but I was watching Danger-Less Detectives and the woman clearly said “Give and take” in English and this was the sub:

I didn’t even know what that means(I googled it and I know now)! I’ve seen this in a few other dramas… they use idioms and other fancy parts of speech for simple sentences… I understand that it adds spice to the language, but these are subtitles and they have to be translated by other volunteers to other languages. It’s best to stick to simple English, and the woman said the words in English, anyway.

I apologize if this hasn’t been touched by the editors yet.

Yeah,I knew it, I’m a moderator on that show,
Actually there’s no accurate word for that, so I followed give and take.
It is edited by the chief editor in March this year.she is a very popular English chief editor.all the episodes were released for other languages too.
Edit: on some later episodes the sub is give and take, you will see it.

I don’t know if this is relevant to this thread but these phrases have been catching me off guard recently.

Whenever I see these subs it makes me laugh out loud because they sound so crass. Esp. the first one. I know there are phrases like those in different languages but it just seems so out of place when it’s translated. Although we use the English phrases irl, they don’t sound as weird as when they’re used in Asian dramas.

It esp. bothers me when ml and his friends are using it. Kinda makes his image bad.

I didn’t understand properly can you explain again.please.

I didn’t understand properly can you explain again.please.

It’s used in context like when a guy chooses his gf over his friends.

I feel your dilemma. But I think these sentences might be in pre-subbed shows. I am an editor on a show where (in subtitles provided by content provider) a lady in her late 30s refers to her deceased parents as “folks”; the pre-subs are pretty bad on almost every 3rd show.

I am sure the editors take care of it when they make their rounds.

I was going to say this. I think this is also more frequent in presubbed shows. Sometimes in the TCs you can find people scolding the subbers in those cases, while they didn’t even work on the drama

Is b*tch the only word there is for the phrase “이 년아”? Sometimes I feel it’s too harsh when it’s just friends talking…

No. Here’s what I wrote about it in the discussion before.

“Another example is 년 (nyun) or 미친년 michinnyun (crazy girl/bitch). It could mean something like bitch, crazy biatch, or it could just be a sarcastic or playful or scolding term used by her own mom and obviously her mom isn’t calling her a bitch! So I really hate it when people just blindly sub Nyun as Bitch and Jjashik/Saekki as SOB. I honestly don’t think Koreans in general doesn’t curse as much as Americans, unless if you are part of a gangster or something. So that’s why when I translate Korean cuss words, it always turns out a bit milder in English. It’s not because I’m trying to sanitize or censor cuss words but I try to translate based on the connotation of what is being said in that context and it usually turns out to be milder terms in English.”

Is swearing allowed while subbing a drama? Subtitling

Not that I’m an expert in cuss words or anything, but as a person who is bilingual in Korean and English, here is my understanding. irmar is right that when you call someone 개새끼 (gae saekki), there is no prostitute connotation. Gae = dog; Saekki = off spring/child/pup. It could be short for Son of Dog or for Dog-like-being (개같은 자식//새끼 Gae Kateun Jjashik/Saekki). So in the second sense, parents are not involved and you are only insulting the offending guy. It’s not that Koreans hate dogs mor…

This is what bothers me the most about these situations with the use of: offending ‘‘vulgar’’ or ‘‘curse’’ words/phrases/slangs. I have no idea what kind of drama you saw those slangs/phrases/subtitles in, but one thing I’m SURE; if it bothers the person watching the drama/movie it was because it wasn’t appropriate to be written in that drama/movie scene. In any given language, curse words that get translated to Other Language, should really come out of the character’s/actor/actress mouth in that scene, not added by the subber ‘‘out of nowhere.’’

In my personal opinion…

Example: I mentioned a drama where in the subtitle an elderly grandpa was telling his grandson ANYWAYS>>>>(blah, blah, blah).ANYWAYS. No such word exist in the dictionary, and is well known is commonly used by high schoolers (no college educated person would add such thing as a subtitle). I HOPE. So whoever this new subber is decides that this 80 year old grandpa will say ANYWAYS to his grandson (by the way) the little Korean I know the grandpa said IN MY OPINION: [HOWEVER] or even [BUT] and of COURSE, the correct way of saying: ANYWAY.

I watch American TV and curse words are commonly used in scenes with street fights, gang members, mafia guys, but you won’t see them in a family program either. Everything has its place, and even cursed words NEED to be added when it comes out from the mouth of the actor/actress if it was written in the script not made up by the person who is writing the subtitle, and this is exactly what I think is happening here: They are making up words/sentences in dramas maybe to be ''funny? to add contribution account (imo main culprit here) More words, more contribution count for the subber to obtained pass and get to see dramas for free,

[EDITORS] something is going on in that department that is not making sense because they should be able to see this in an instant, and make sure to change that word, and not leave it there in the drama affecting the quality of the subtitles, and EVEN the oimage of the character playing the role.