I would like to see a proper new role for Page Designers in the Team tab.

True, they would only need access to the pages and not the episodes (not meaning to exclude them from watching, but entering the editor function).

There is a bug.

5, I tried another drama where I was ONLY English moderator (The Devil Judge) and I did see one language hidden by its moderator (French). And here, English was available in the drop-down menu.

So there is no consistent pattern to this. It means it’s a bug.

I tried with a drama where I was ONLY Italian moderator, not English or CM (Good Casting). This time Italian was there (and it was the only one available, of course).

I tried and I was able to hide telugu team.
Mods can only hide the language they are in charge of,cms I don’t know, may be it is because of a bug. 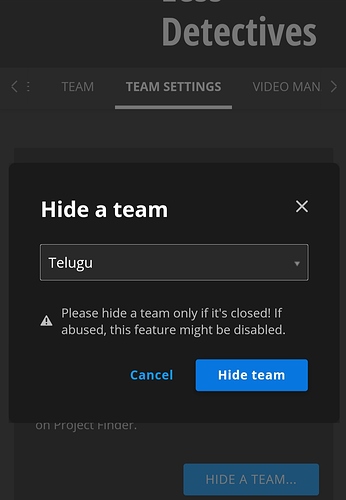 I have faced the same issue on several shows earlier today. I was successful in hiding the teams of first two shows but for the latter ones, I don’t see any team on settings page.

I am the Chinese (Simplified) Moderator on this show, but no team is available for me to hide. I also don’t have the option to remove the Spanish team from selection (which is, of course good to avoid abuse of the system)

I am the Hindi moderator on this show (Cafe Midnight 2) but I still can’t see hide team option.

However, I can see option to hide Hindi team on The Next Door Witch J.

Are the projects where you couldn’t hide the team already finished (subs at over 95%)?

@irmar It’s probably a bug because if I look at channels where I’m the CM, I am able to hide all languages (even languages that don’t have a team to be hidden).

I meant OL mods, of course. Which makes me think, if a Page Designer is to be implemented into the Project Finder, then I would like to see a proper new role for Page Designers in the Team tab.

Ah, I see. Point taken. Still good to be specific to avoid “confusion” or “misunderstanding” hehe. And I agree. A proper new role for Cover Designers. Someday, there will be, I hope.

True, they would only need access to the pages and not the episodes (not meaning to exclude them from watching, but entering the editor function).

Agree. It’d be better this way.
In the same vein, there’s a real need for a “specific role” for A&C seggers. As of now, they are all “AL Mods” and that’s confusing, to say the least.

You see I am no segger and it has been ages, I had one CM position. What do you mean with A&C seggers?

They are seggers who adjusts and combines the segments.
For those shows which comes with segments and english subs. The seggers recheck them i.e adjusting and combining.

Thank you for the explanation, I got what you mean.

I was going through one of @irmar’s posts in Help Center and this idea really caught my eye.

I am not aware of what the previous PF looked like but a “Moderator Application” is a good idea. A form with some in-built questions and criteria where interested volunteers can apply and then after the CM is chosen, they can have a look at the applications.

Didn’t they say it would be releasing on 24th August? Lets see if everything works by then

I am really impatient for the new Project Finder. I can’t even wait any longer!

I just opened to check it!!

Can’t wait to check it out!

Okay… it looks like every single drama on Viki is on it right now… It’s going to be a complete mess if people start applying everywhere.

list projects at a channel level to accurately reflect how teams work.

I still cannot find my languages in most of my projects.
I was able to hide the language in some of my shows, but not in others. Even when I was the Channel Manager, many languages (e.g. German, French, Italian) were missing. 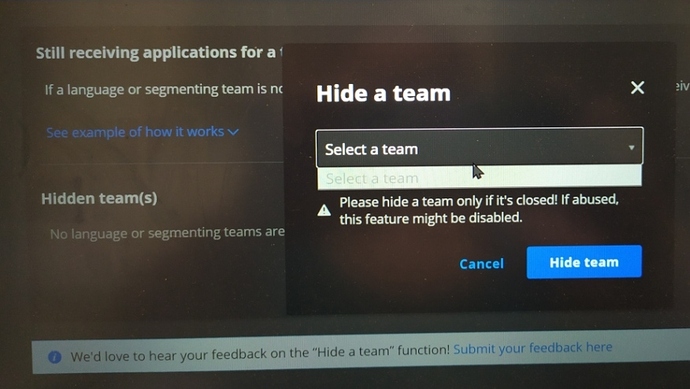 The following is a project where I was CM. Italian is not in the list. 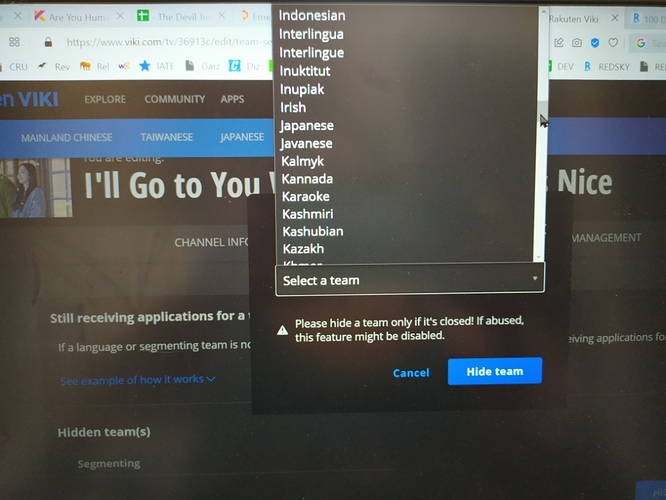 Neither is English. Spanish and Greek were available though. 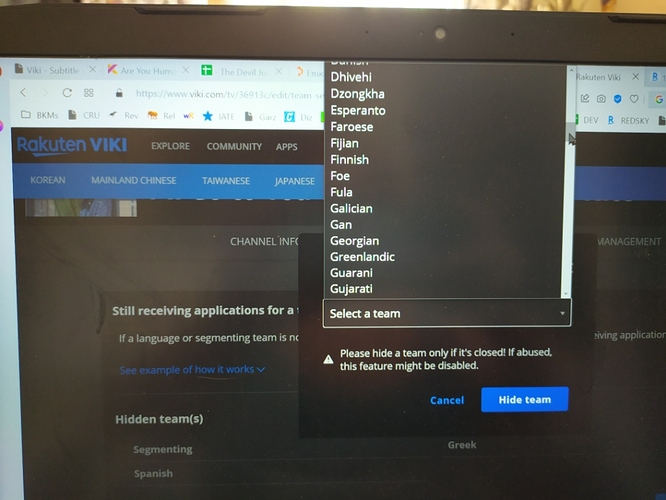 No English here. And I was English mod. 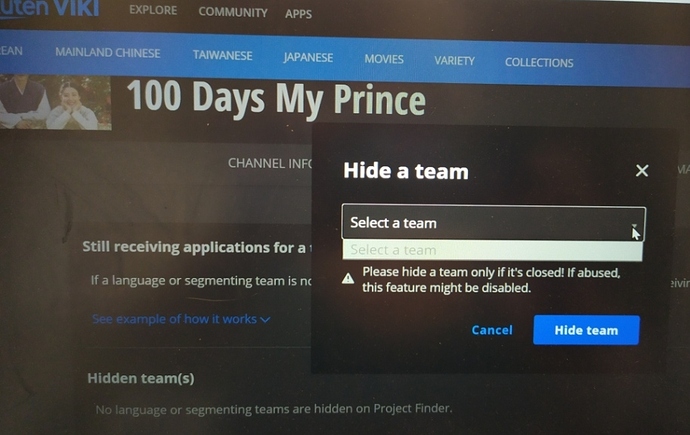 Here English was available, I could hide it. 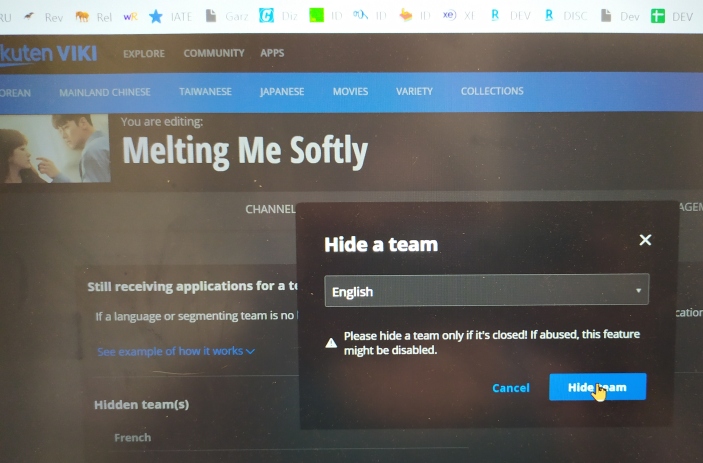 A project for which I keep receiving requests is I Am Not A Robot because of a “special episode” announced. For that one I cannot hide my team!

On the contrary, there is a project, Revenge Note, for which I was only Chief English editor (not CM). And yet I could see a whole list of other languages that I could potentially close. Why?

I already filled the feedback form, I thought I’d share my opinions here as well.

Still, I am thankful for all the changes.

Now that it is actualized, “fresh” projects may find new translators (I guess the old version stopped adding new productions at least a few months ago). So I’m glad they fix it. Nice touch with preferences of language and synopsis. I’m curious how the application form will look from the moderator’s point of view. But I’m also found some blindspots. I guess that every episode must be 100% completed or something similar cause for polish translation I found many projects which are finished but still can be found on the new project finder. Have a good day.

P.S. Forgotten to mention that it’s weird that project that are not available in my region, are available on project finder, it’s like you can translate it, but can’t watch it or something

I think this isn’t going to work as it could, not until all CMs and moderators hide their teams. There is a limit to what can be done automatically through the system programming, so it is up to the volunteers or so it seems. When I tried it, I also found many dramas that have already been translated in Greek and this isn’t going to change until the teams are hidden.

If I could suggest something, that would be for a message to be sent to all CMs and moderators to check their projects and hide their respective teams. I don’ t know, though, if that’s technically possible. If not, even a message to everyone would be a solution. Not every volunteer checks the discussions or reads the newsletter. With a private message, some people may pay more attention.
Still, some CMs or moderators might not be around anymore, so who’s going to hide the teams?