Yeah, we didn´t got it in our personal email or inbox

Didn’t get this one either, and I finally got to vent one of my frustrations there:))). I don’t think this will help in any way in that matter, but at least I spoke up. And that’s all thanks to you^^

Now I’m a CM I really start to hate the inbox more. As a CM I always send mass PM’s to people to ask if they want to join the team. Now I can still do that but need to add the people one by one. Also if I send it to 15 people and one of them replies to me, all the other 14 people will see that reply too. I don’t like that, not that it’s invading my privacy but why should person B know what person A replied to me? Today I decided to send a message one by one but then there is an another problem: You have one box so all the messages I send are on top of all the messages I receive. I cannot delete those otherwise the people whom I did send them too cannot reply. So now with my latest mass PM I decided to switch of replies but that feels a bit rude…

Hopefully Viki can fix it.

Does anyone know how to get the inbox emails? The setting for the emails is switched on, yet I don’t receive the emails for the GOs.

I get emails for replies to my discussion posts, but not for my personal inbox.

Does anyone know how to get the inbox emails?

You mean this information?

How do I access my inbox? Visit contribute.viki.com and click on your icon on the right-hand corner of the screen. A drop-down menu will appear. Click Messages and this will open your inbox. ...

I think she means e-mail notifications about new messages in the Viki inbox.

As far as I know, this is what I have experimented:

So I don’t receive all notification on gmail (It’s different from the previous mailbox) and I don’t know what drama they’re talking about or what it is about.

So later, I check the whole thread on Viki mailbox to understand the parts skipped.

In short, maybe don’t rely yet on the notification, you might not receive them all and/or later like in my case.

Thank you everyone for your replies, I will read up on this inbox issue. Piranna, yes, I do sometimes get the replies instead of the actual GO for the episode, but recently, I haven’t been receiving any notification whatsoever. I will try to play around with the settings

Totally agree with your statements! It’s really confusing and I lost a lot of old messages that I didn’t remove and I can’t find it anymore.

It’s impossible to read old messages from inbox before the changed it to the new style, I’d have to scroll forever, it’s not practical at all, if there were at least like a search box you could write the ID in… it’s just a weird system to me… also the big boxes of each answer is not practical I see like one or two at a time on my 14" inch screen, always scroll, why did they decide to put answers or text as clouds??

That would be very convenient. I had to scroll to find a message sent to me 6-7 months ago.

I thought the inbox was now set to dark mode but since the changes in the design, mine has switched from dark mode to light mode with no possibility to change it, which I miss a lot. The message boxes are quite light too (light brown/yellow) which often makes the page too bright.
I still miss some email notifications once in a while so I have to log in everyday if I want to make sure not to miss anything like the opening of subtitling for the drama I’m supposed to work on as happened yesterday.
I thought the previous in-box worked quite well. It was easy to find old messages or sent messages.
As bugs are being corrected and changes made, I truly hope we will see more improvements.

I don’t often use the Viki inbox or I type mostly short answers, until today: 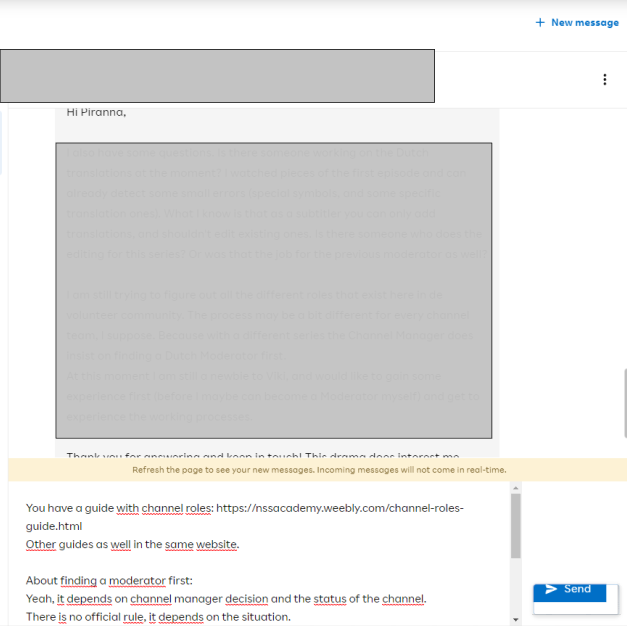 I scroll up and down to edit my answer and it’s difficult to form a long answer.

Suggestions:
Could we have a

button so we could if we want to, “Write an answer in a new window”?
Or would it be possible for the writer to shorten or extend the area of the answer?

Like on this forum, when we edit, we have a blue bar to extend the area: