What languages do you speak/are learning?

What is one more language anyway. I’ll add them to my list of NON fluency language expertise!

Yea but of those three languages, does Thai use an alphabet or characters?

Learning over 3000 characters is daunting to me. I can only read a few Chinese characters. The Majong tiles, hello, goodbye, etc. Just very basic stuff.

Yea but of those three languages, does Thai use an alphabet or characters?

Yes. But at least they don’t have 3, like Japanese. 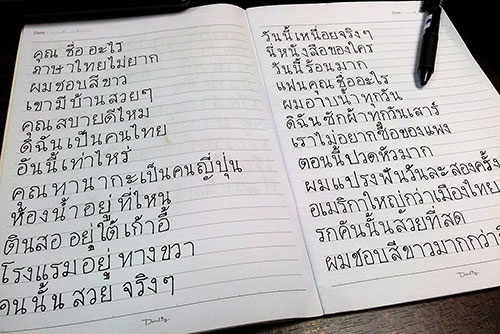 Thai uses written characters and I believe is also phonetic like Hangul.

Learning over 3000 characters is daunting to me. I can only read a few Chinese characters. The Majong tiles, hello, goodbye, etc. Just very basic stuff.

I doubt I know even 3,000 of Chinese characters and I’ve had six years of Chinese primary schooling

You probably have noticed that learning Chinese is a lot of memorising but it’s also logical (where there’s a main stroke in most character that represent human, hand, water etc.). I remember my teachers going through characters after characters with the class and the four different tones too. I really hated it then but now, I appreciate it.

I have hangul stickers on my keyboard

Lucky! I memorised the keys for the Hangul keyboard using online tips (Bungee Jump Don’t Get Scared/ i forgot the middle line/ Use Karate to Chop Pears)
but now I’m kinda used to it so I know where they are. Otherwise there’s always hit-and-trial

and the four different tones too

I once did an online course about Chinese pronunciation and the tones were explained very well there. Not that I remember all the details by now, but at least it took away my fear of them.
Up till then I had always imagined tones as words being pronounced in soprano, tenor, baritone, bass or whatever.

I speak english, french and arabic fluently. I am intermediate in spanish and beginner with Chinese, dustch and korean.

Feel free to ask if anything is unclear to you.

You probably have noticed that learning Chinese is a lot of memorising but it’s also logical (where there’s a main stroke in most character that represent human, hand, water etc.). I remember my teachers going through characters after characters with the class and

The Mandarin and Cantonese words and the characters I do know come from living in San Francisco. Not school.

For the few words I know, I don’t seem to have any problems with tones. To me it is just a musical response and easy to remember. But becoming literate at reading characters is the issue for me. (In truth, I am probably too lazy -

) I would be better at learning Mandarin from friends rather than academically.

Oh, and since Cantonese is such a huge spoken language in San Francisco, along with Mandarin, when people say they speak Chinese I always have to ask which language?

Yea, I remembered the most commonly used ones but I’d have to type hit or miss on the lesser used ones. But I didn’t use those memory-words.

Because of the way 한흘 is structured into syllable blocks, if I mess up a letter and go back to fix it, I have to write the whole syllable block again. So I purchased the stickers. They didn’t cost much at all.

Oh, and since Cantonese is such a huge spoken language in San Francisco, along with Mandarin, when people say they speak Chinese I always have to ask which language?

So if I ever were to apply for citizenship of San Francisco, I guess I’d have to take exams in Mandarin and Cantonese?

So if I ever were to apply for citizenship of San Francisco, I guess I’d have to take exams in Mandarin and Cantonese?

If you want to eat in Chinatown you’d have to use the correct language.

or be really really good at understanding accents. Or better yet, go to non-tourist restaurants off of Grant upstairs, where no one speaks English - that’s where you get REAL food. The serving people come by pushing little carts with a variety of delicious dishes. You select your dish and at the end of the meal they write it up. That’s where I’d get braised and fried chicken feet served foot up in a bowl of rice. yea. You won’t find that on the tourist menus downstairs.

I am a LONG way about 995 miles from the nearest bakery. (I miss home)

Char Siu is barbecued pork and Bao is a steamed/baked bread. Put the bbq pork in the bun and steam or bake it. TO DIE FOR! I do have the recipe but it’s only me and I KNOW I will try eat the whole tray in one sitting and that is just no good for my diet plan.

I guess all I would need are the Mandarin and Cantonese translations of “Do you serve anything vegetarian?”

I had always imagined tones as words being pronounced in soprano, tenor, baritone, bass or whatever.

That’s interesting! My English husband took basic Mandarin classes years ago and he learnt the tones by using his musical ear as he has a good sense of pitch. Not to mention, he loves music. I know that for westerners, the different tones can be challenging for them so I always tell them to use music to learn and remember the tones.

Some of you may be aware of this. Mandarin is the official written and spoken language in China while Cantonese is more of a spoken dialect and it’s some of it’s written characters are only specific to Hong Kong (though slowly becoming less common). So, while someone from Hong Kong is able to read Mandarin characters and makes sense to them, someone who is not from Hong Kong may be able to the specific Hong Kong written characters but doesn’t make sense to them unless they speak Cantonese. I hope I’m making sense

I guess all I would need are the Mandarin and Cantonese translations of “Do you serve anything vegetarian?”

Weeell… Be advised - We are talking real Chinese food - a la what they serve in Chinatown in San Francisco, not the tourist trap stuff or that watered down, tasteless stuff made for the American palate that you find in small towns across America. There are ‘vegetarian’ dishes in every restaurant in Chinatown and if you wanted just a vegetable dish, you would be fine. You wouldn’t have to speak either language at the a la cart place I told you about - upstairs, off the tourist trail, where the locals eat, you can see what they are pushing around and pick whatever looks good to you. But… hmmm… Chinese people aren’t Vegan unless they are Buddhist, so you are taking your chances on whether or not that ‘vegetable’ dish is truly ‘Vegetarian’ in the sense you mean. A lot of vegetarian food requests are translated as just vegetable and no meat. The kitchen staff are not going to follow the Vegetarian/Vegan principles that a Vegan expects and they will cook that ‘vegetable’ dish in the same wok, right after they cook another meat or seafood dish. The same woks are used - just rinsed out between food orders. The average restaurants in Chinatown do not have a separation of cooking utensils. Just so you know that.

Now the expensive tourist restaurants would have ‘vegetarian’ dishes on their menu under the heading ‘vegetarian’ but I am not so sure their kitchen staff follows vegan food principles either.

So if you go to a real restaurant and not a tourist trap that serves ‘chop suey’ (Chop Suey means odds and ends or ‘left overs’!

which by the way was invented in San Francisco) and ask if they have vegetarian dishes, You’ll get a smile and a quick nod/bow and, “Sure sure, vegetable only.” as a response.

Oh! FUNNY! It was reported that during President Nixon’s famous visit to China, at a state dinner, he asked for chop suey! His hosts looked at each other and wondered why he was ordering left overs.

But old Tricky-Dick didn’t know any better., he only knew the bland stuff that was made for American palates.

Yea, Unfortunately too many Americans think Chinese food is all Chop Suey, Fried Rice and Sweet and Sour pork.

Guess I’d better go look for a Buddhist dish then …

Actually, the restaurant dilemmas for vegetarians and vegans exist in the west as well. There has been some improvement the last few years, but you still need to pay attention. If the only vegetarian dish a restaurant serves contains cheese, a vegetarian cannot just assume they used vegetarian cheese (made with vegetarian rennet). And the waiters usually have never even heard of cheese not being “vegetarian”.

In fact, some people would still ask “Do you eat fish?”, “Do you eat chicken?” when they hear you’re a vegetarian.

Before giving up on Chinese restaurants in The Netherlands they litterally had nothing that I could eat. It might have changed by now, I haven’t checked it lately.

You could also go to one of the hole in a wall restaurants where there is a long counter with stools. The cooks are cooking right there where you can watch. If it was the old days, before the anti-smoking laws, you might have found a cook with a cigarette hanging out of his mouth talking in a REALLY loud voice in Cantonese to the cook right next to him.
He would turn to you and ask, “What you want?” Ask him for vegetarian, he’d give you, ‘a look’, ashes dropping off of the cigarette onto the floor then he’d turn back to his cooking while saying, “Yes yes vegetable. What kind?” and point to the menu on the wall which is all in characters with pictures.

You’d go, “uh”… not knowing what the menu said. Then he’d tell you, “Pick number”

Hello,
I can speak hindi,English,malayalam,tamil and I know some Arabic too and I’m currently learning korean,chinese,japan