Devilish Joy! Aw, I loved the first kiss on vacation who wouldn’t want to meet a Hottie on vacation!

This was just a perfect angle for his height and the shortness of the girl. I am glad this Director had some common sense unlike a previous drama I saw where the kissing scene left a lot to be desired.

THIS ONE STEALS THE AWARDS FOR GROSSEST, CUTEST, MOST CREATIVE KISS SCENE

i havenn’t watched thee drama yet but the numbber of times I’ve watched this part, cringed like anything then blushed

Yup, I’ve seen it! I like it, it’s sweet and interesting. The female lead character didn’t annoy me, so I was happy about that.

He did an interview and I was rolling in laughter bc he said they made those scenes so ‘‘hot’’ that he was barely able to contain himself, and not do a crazy thing and he was so damn serious that I couldn’t help but feel sorry for him and the struggles he faced to ‘‘contain’’ himself. I love him as an actor bc he goes deep into his roles. He doesn’t play the role, he lives through them. Have you seen BIG? That’s when I became one of his fan and Lee Min Jung (great awesome actress too)

I have not watched BIG yet. I have heard that from some other friends that it wasn’t their fav

I loved BIG but I know if the viewer is young and loves idol actors, they won’t like the drama. I feel is more geared to an older crowd. I’m the type that I accept the characters the writer created although I know it could have been written better. In my opinion she should have stayed with her Fiancé and not the younger brother. He really loved her and was never unfaithful to her. I have seen it 3 times bc is funny, touching and the OST were so perfect in that drama. Just check out the second episode at least, and see if you really don’t care to continue watching.

You also mentioned you was disappointed with Memories of Alhambra and all I do is pray so they do the much awaited part 2. I am so looking forward to such a great drama.
Love the realistic special effects it had.

but I know if the viewer is young and loves idol actors, they won’t like the drama. I feel is more geared to an older crowd. I’m the type that I accept the characters the writer created

Well, I didn’t love BIG, and I am neither young nor an idol lover and yes I can accept the characters, but that doesn’t necessarily mean I will enjoy them, by the way I watched the drama till the end one time, never went back.

You didn’t love it but you must have liked it somewhat to watch it till the end. This drama had an extremely low rating and a lot of criticism bc of the age difference between FL and second ML, and that was the reason why they used GY to film the last scene instead of the young man.
I think since it was the first time in my life I watched an Asian drama (back then I thought everyone was Chinese) I didn’t know anything about South Korea either; so I really liked the fact that I was watching something different, and I discovered through that drama, the Korean culture.
My confusion that they were Chinese came from the fact that we have a channel that the Chinese dubbed all the Korean dramas in Chinese so I though BIG and many Korean dramas I watched in that channel were Chinese drama. It wasn’t until the channel stopped giving the drama (and I was going crazy) then, my youngest daughter suggested I did a search in the internet, and I discovered they had this drama at a site called viki, and that’s when I was able to learn it wasn’t a Chinese drama but a South Korean drama,and my love for K drama was born.
In reality I repeat some dramas bc I tend to skip parts that I find are too boring so I mainly re-watch again to see the parts I skipped. I watched this one 3 times bc since 2013 I missed the dramas they made back then, so just recently I watched the whole thing again. W is another drama I watched about 3 times, and My Last Love Song too. Certain dramas I can watch many times and I really can’t explain why I like them so much.

Gong Yoo and Lee Min Jung did a share of great kisses in that drama. I compare this drama with when you fall in love for the first time and if you don’t marry that person you always long to see that person again, and always wondered what it would be like to have married that person. BIG is to me my first love for K drama that I seem never to forget, miss and yearn to see again…so every chance I can, i go back to see my love I miss so much.

I have never understood the age difference controversy if you are both adults who cares about age but that’s just me. I LOVE Gong Yoo and I have seen outtakes from the show so I bet I will like it! I did not like Witch’s Romance not because of the age difference but because they had a great kiss, then a intimate moment in the beginning, but after that what adult relationship I wanted became super comical. I wanted it to be a normal adult relationship. I loved Encounter! And that is a age difference. I will try BIG eventually!!! See what happens.

I didn’t like that one and it was mainly the actress fault bc she didn’t made me feel the love in her for that cute young chicken. My second ex was way younger than me so I don’t see anything wrong in women being older than the guy. She was too stuck up, too.

Encounter? Yep, I do agree on the FL. I am all about Park Bo Gum. He makes you feel the feels and I like the Cuba scenery. But I totally, get you on the FL lead.

of course, he’s 37 inside and acts it so

I usually don’t care about age gaps except when it’s glaringly obvious-- like one of the partners REALLY needs to mature up.
Like in Goblin, sometimes I felt like she would have been cute with Deok Hwa (the nephew) because they both acted like little kids while Gong Yoo was most of the time “older”(yeah he was silly in the comical parts, but his character inside) Because of the silly moments, you’re able to see that he really loves her, whereas in a lot of other dramas, it always feels like one partner(usually the younger one) is pouring most of the effort and love in the relationship and it feels unbalanced.

You didn’t love it but you must have liked it somewhat to watch it till the end.

Back then I was already at least 3-4 years into Asian dramas, so Big is no first love to me. My first drama was Green Rose, not my first love either but made me curious and if male lead Go Soo makes a drama I will still try it out, which isn’t the case with female lead Lee Da Hae. Anyway in the past I used to finish every drama good or bad, it didn’t, and it doesn’t mean that I love a drama. I just like to analyze the “swing” of the story, watch the actors play, because those things aren’t all bad just because I do not like the drama to much.
There were only a few dramas I stopped watching but took up again, f.e. Robber … But there are as well dramas I never got back to like The Slave Hunters … And yes, it doesn’t say anything about the quality about the drama just that I couldn’t bring myself to finish it.

I have never understood the age difference controversy if you are both adults who cares about age but that’s just me.

Liked it too, but yeah would have liked it more if it had a more serious touch and I probably liked her best friend played by Ra Mi Ran that much to finish it.

Was just and okay drama for me, probably, how do I put it, I don’t know if I do the drama justice if I say it was “too polished” for me.

Secret Love Affair is another “age difference” drama and one I stopped in the middle because of the corruption going on, and I didn’t know if the story would work out for me, took me years to finish it. Had nothing to do with the age of the leads but the “deals” made in the drama.

I love the Music in Secret Love Affair! I know it’s a taboo thing that is happening but I bought the OST because the classical music was so beautiful. I hv not finished it either as I am getting to the kinda Gangsta part of it. I will go back eventually. Encounter (ITS just all about Park Bo Gum for me) I love him. I’m kinda weird I did not like Fight Your Way or Witch’s Romance. I have friends that love those two dramas. My least favorite was Hyde Jeykll Me. 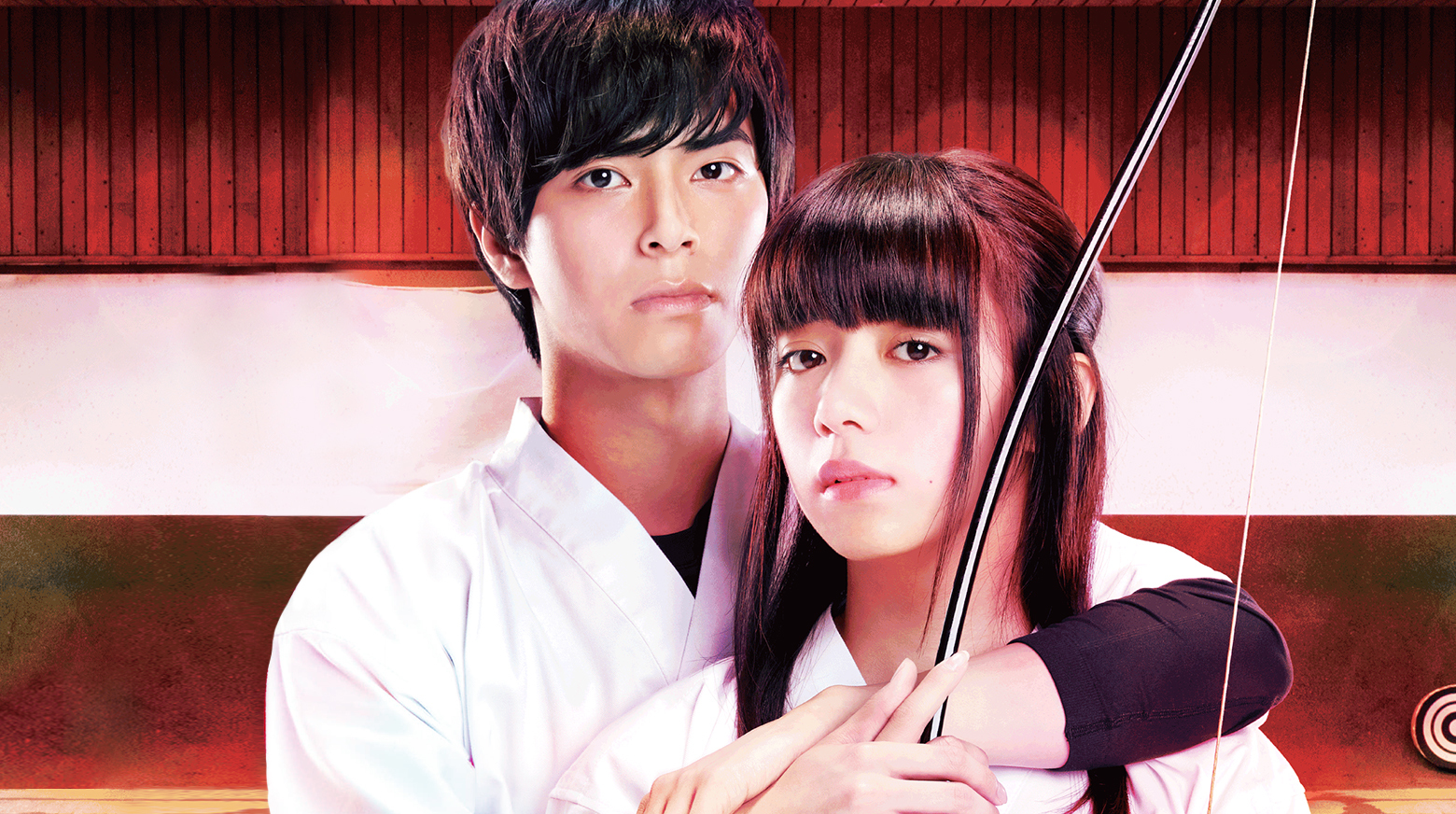 Since first picking up a bow in middle school, An Kishimoto (Elaiza Ikeda) has been in love with kyudo, or the Japanese martial art of archery. Having devoted herself to the study of the art for the past six years, An has grown into quite the...

I have to agree with you.

Too bad they deleted that and went with the shorter version. I love Gong Yoo!