REVENGE is the only thing I can see - Jealousy! And one word “anyone” can destroy you over anything. FALSE

it reads like a bitter ex trying to keep him from having a good life.

Exactly. And that thought is scary. With the internet, we can ruin anyone’s lives. The media has no real accountability when they run with these stories. It has resulted in good movements to give voice to the disenfranchised, but it is so dangerous.

Even with Jo Byung Gyu from The Uncanny Encounter. He worked so hard and his career was ruined by people behind a screen. I haven’t seen as many articles/discussion about how he is innocent.

I haven’t seen as many articles/discussion about how he is innocent.

I just read an article today about how the accusations were false, but one does wonder if the media outlets will put in just as much effort to help clear his name as they did to spread the original news of the rumors that led to the damage of his reputation. And not just him but all the others for whom this has happened.

I swear when Ji Soo gets out of the Army I hope he gets his career back - but will he want it! Now that he’s quiet and out of the limelight - maybe he won’t want to subject himself to the possibility of getting attacked again. I think the person who started the false rumors should be FINED - but I know the article said he forgave them - but I actually hope he sues them for defamation

I wonder if this is partly because he’s the writer and not in the spotlight, people in front of the camera are held to a different moral standard than the people behind the camera.

Maybe, but if we look at Tomohisa Yamashita / Yamapi who’s a singer/actor…

he got caught drinking with underage girls (17) and went to a hotel with one of them - and even if he had to leave his agency he continued filming (though internationally) and considers returning to Japan (afterwards he became Dior’s ambassador lol). ö.ö The guy who accompanied him and were just drinking along with them had to write a letter of apology only and continued acting etc. afterwards.

What is the motivation to falsely accuse an old class mate like that?

Well, what’s the motivation of people bashing others in the first place? They might be envious or never liked them in the first place. “Fake news” became more popular and people noticed how much of an impact they may have.

Cudnt care less what the actors do in their private lives. A lot of what’s acused is petty jealously… Eggerated… Irrelevant… Made up. Using social media to accuse some one is suspect anyway and its unfair that stars who are innocent still suffer. The very small amount that is true should be sorted privately. Makes no difference in my viewing s I’m watching a character not the actor.

After receiving a lot of backlash - Kim Jung Hyun is finally reappearing with a new agency.

I’ve been away from the Kdrama world for several months, so some of these scandals are new to me.

Sometimes scandals do affect what I watch or listen to.

A Korean singer years ago got caught up in a scandal where he filmed inappropriate things. Every time I heard a song of his that I liked, I couldn’t help but sigh in sadness. I haven’t listened to any more of his songs, though.

A voice actor for an anime was caught with inappropriate magazines (like, criminal ones). He went to jail. The anime changed the voice actor for the character. However, I’m willing to still watch that anime, but I’ll have that knowledge in the back of my mind.

I would totally watch a Ji Soo drama if he intends to act again. I’ve expressed my support of him before in other posts.

Oh, he chose a good writer, he or she made him an excellent letter.

There was a famous man that said You who are with out sin throw the first stone. I just paraphrased here now but those of you that know the Word know where I coming from. In my youth with the lack knowledge I did things that I regret and repented of and thankfully He does not remember them as the word states. With that said what these young Actors and actresses do in their youth is for them to deal with and fine peace. I don’t think it is right to disparaged them for something done before knowing from right or wrong. What is true we know not; everybody remembers things differently and have their owns opinions. So no I would not let any scandal interfere with watching a show that I wanted to see. There is only one exception and I will not get in to that.

Ji Soo - I am wishing you well! Hope you are doing well in service!

Viki has deleted Dear M from their library.

It never got broadcasted, right? Maybe it got taken off the schedule for good?

Unlike River Where The Moon Rises, there is no news of reshooting with a new actress.

Unlike River Where The Moon Rises

That was a big production, but Dear M seems to be a 12 episode, youth related drama, no real big names … So for it to never see the light might actually be cheaper, than to do it again, …

It’s not necessarily Viki who did it, there is the production and the broadcaster, as we can’t see behind the “walls”, we probably won’t know.

NCT’s Jaehyun was set to appear in it. NCT is quite a large fandom and Jaehyun’s solo fandom is also one of the largest out of the 23 NCT members there are. I doubt they’ll let Dear M disappear into oblivion just like that…

quite a large fandom

Well, you know netizens in Korea are a different case than in almost any other country, so I guess the fandom is younger, but especially the ajumma netizens are not a group to joke with.

As always, we will see what the future brings. Did she have to go to court, or was there any other news related to her?

I had been looking forward to that one after hearing about it so long ago. Too bad about what happened, for everyone involved.

Viki might have canceled their contract? Or might have taken the channel down and will put it up again when there is a set air date?

This is Viki’s message to the volunteers, including the Portuguese Team. 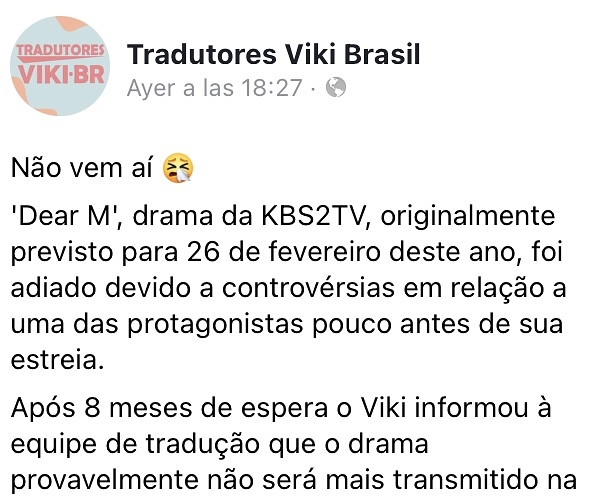 I’m quite capable of defending myself. And the one time I couldn’t defend myself, I left and never returned. I expect any woman, or man, to know when it’s time to LEAVE. BUT … child abuse is a drama that I will not tolerate. If I was aware of my favorite performer’s actions, and they were proven beyond doubt, I would no longer follow anything that person did. Even my much loved dramas and rom/coms. This is why I only allow myself to ‘like’ an actor or singer, but I do not follow their lives. Who among us is totally innocent of anything that would embarrass us in public, or disappoint our loved ones if they knew? If I was a public figure, well, I don’t really do anything ‘bad’, but I tend to say things that are either misunderstood because of the listener’s ignorance of the subject (Yeah, right.) or it is taken out of context (it does happen), or I just totally misspoke due to my own ignorance. And If I had a paparazzi following me around 24-7, I’d probably do something on purpose just because … So… I enjoy my rom/coms, and leave the dramadies to the psychic- vampires who feed on others poor souls rather than their blood.