@ajumma2 – Oh goody – instead of by rack of babyback ribs and a baked potato stuffed with butter and sour cream, I will just consume a Bloomin Onion by myself!

Isekai Izakaya Nobu - Ep 9
The snivelling guy on the right is berating the women staff on behalf of the horrible city councillor. 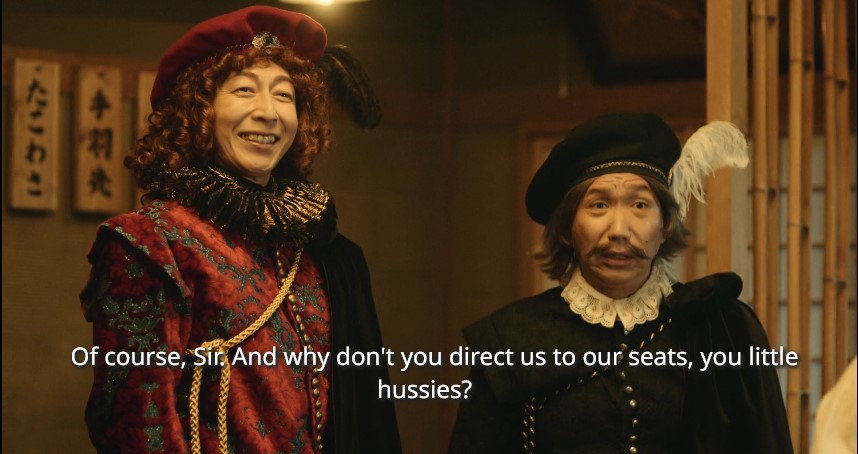 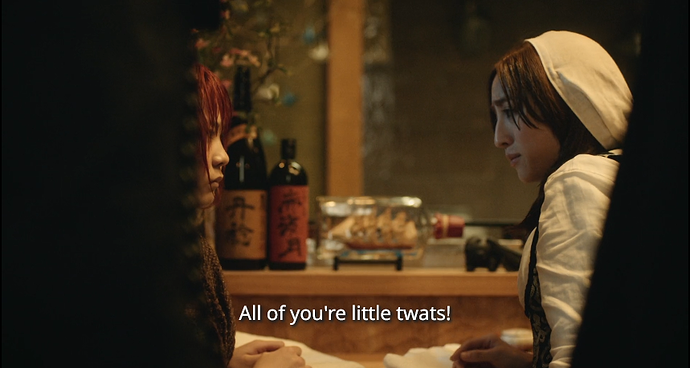 Don’t know if it has the same meaning in other parts of the world but certainly here in the UK, this was my reaction.
(and yes, maybe I should say something…

Here’s a new one from Today’s Webtoon, (English subs are NOT by viki volunteers): “When it comes to a match, you just never know until the final buzzard goes off.” According to wikipedia, a buzzard is a predatory bird. Was the subber trying to re phase, “it’s not over until the fat lady sings?” but was concerned about fat shaming or anti-feminist sentiments?

Perhaps due to a momentary brain fog.
Another possibility: I think s/he meant to use the term “buzzer” (bell or signaling device) which is commonly found in sports or competitions.

Omg, if true, that is really funny!!

“It ain’t over till the fat lady sings” is a phrase that means a person should not assume the outcome of a situation until it reaches its end, because the circumstances can change.Nothing is irreversible until the final act is played out. It refers to the world of opera, where typically the soprano sings a last aria before she dies and the opera ends.

The first recorded use of the phrase is believed to be from US sports presenter Ralph Carpenter in a broadcast, reported in the newspaper The Dallas Morning News, March 1976. The basketball match ended in a tie, and this was the commentary:

It was also used in 1978 by Dan Cook, a sports writer from San Antonio, Texas, after his town’s basketball team had gone one up in a championship series. He said: “the opera isn’t over till the fat lady sings”.

Whilst printed examples of the expression haven’t been found that date from before 1976, there are numerous residents of the southern states of the USA who claim to have known the phrase throughout their lives, as far back as the early 20th century. “It ain’t over till the fat lady sings the blues” and “Church ain’t out till the fat lady sings” are colloquial versions that have been reported; the second example was listed in Southern Words and Sayings , by Fabia Rue and Charles Rayford Smith in 1976.
Carpenter’s and Cook’s broadcasts did popularise the expression, which became commonplace in the late 1970s, but it appears that we are more likely to have found the first of the mysterious fat ladies in a church in the Deep South than on the opera stage or in a sports stadium.

Another explanation:
Dame Nelly Melba was a woman of considerable, operatic proportions. During a triumphant tour of Australia concessions were offered to school groups and teachers notes to accompany the event included an advisory covering arrival, seating, general conduct in this formal setting and the line “Please tell all students that the show isn’t over until the fat lady sings.”
Another version:
Al Capone became much enamoured of opera, swotting up with scores, records, and even tutors, until he regarded himself sufficiently au fait to sample the real thing. Accompanied by two bodyguards, he took his seat at the opera house. After the first aria, the goons rose to leave, whereupon Al grabbed them by their coattails: “Siddown,” he growled, “it ain’t over till the fat lady sings”. 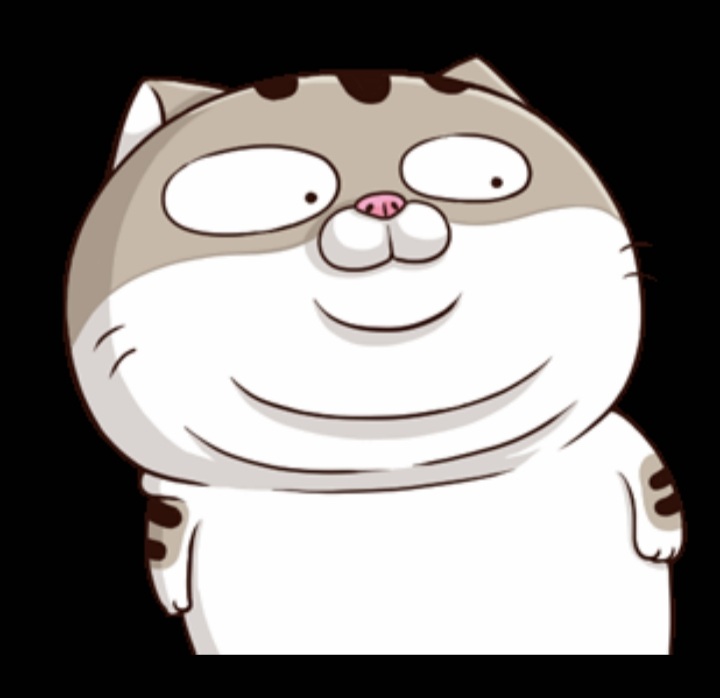 @irmar Thanks! I especially liked the part about the fat lady sinks!

Today’s Webtoon Episode 14 “so even though I was working my body to a grind,
I’ve never even fathomed starting a company.”

Is this some perversion of being tied to a millstone (the stones which grinds grain) – so a bull would be tied to a millstone and would walk around and around all day grinding grain. Fathom means to understand, to discover.
In Today’s Webtoon, a famous cartoon artist is supposed to be saying this. Picture him tied to the millstone grinding grain and the chat bubble above him says "I don’t understand how to start a company. "
How the heck do I edit this so the other language subbers can make sense out of it?

working my body to a grind,

in modern times, we’d say “working my ass off”

But for subtitles… maybe “Even though I wore myself out with work, I never dreamed of starting a company”?

About that lol… it reminds me of this scene -from a popular pre-subbed (or MT?) drama.

Today’s Webtoon Episode 14 “so even though I was working my body to a grind,
I’ve never even fathomed starting a company.”

From an English perspective, this seems to be a compound of a few idioms.

The caption you give for the image suggests #1.

That’s the problem with slang/idiom words in subtitles that can create some confusion if we are not familiar with the word.

I agree with you. While idioms add some colour and often visual components to language, they are not easily understood. I love your example.

Here is another example of Google translate gone wrong.

In “Mental Coach Jegal”, 전화위복 (jeon-hwa-we-bok) had been translated to “phone scam”. 전화 does mean “phone”, but 전화위복 actually is a 사자성어 (four character idiomatic expression) and refers to a situation wherein a crisis turns into an opportunity. Had the subber/editor recognized the expression as a 사자성어, s/he would have realized that the expression is explained in the very next segment.

So glad to see you around! Thank you so much for this wonderful information because it helps me be more aware to recognize, and pay attention as to what context the word may play in a sentence.

I always skip a segment that the translation may not make sense to me, and usually like you point it out in here, after reading further along I can fill out the segment I left in blank. If by chance I still don’t get it, I just leave the segment blank, and write a note to the moderator why I left that segment in blank.

I rather lose contribution count than ‘‘loosing face’’ like they say in Korean. I am trying to get familiar with Korean idiomatic expression with a link you provided a long time ago

Here is the link below; in case someone wants to look into it, and thank you so much for always sharing your knowledge of your native language with all of us. If I can ever be of any help with Spanish, just ask, I’m at your service. BTW, congratulations to your daughter on her new job! Proud momma and with good reason!

Good to see you back!

I agree with you that it’s better to leave a blank segment than to overestimate your translation skills with any questionable phrase.

Since I have many upcoming travel plans, I don’t have the time nor the desire to commit myself to work on a team so I’ve been providing translation advice privately to those CMs and CEs who value and trust my judgment.

I am off to Seattle tomorrow for an apartment search for my daughter. Thank you for your kind words.

Btw, I believe the link you mentioned above was provided by @cgwm808. Only a small portion of them are widely used so no need to study them.

In a couple of recent Korean shows, I noticed that certain proper names were translated. In both instances, the translation of proper names did not improve the quality of subtitles, but rather misinform/misled the viewers. Fortunately, the CEs for those shows were very receptive and corrections were quickly made before the videos were released to OLs.

In “Love is for Suckers”, there is a conversation about a womanizer who supposedly dated 100 women. The FL compared him to “의자왕” which was originally translated to “Chair King”. 의자 means “chair” and 왕 means “king”. However, 의자왕 is a historical figure who appears in the Korean folklore “King Uija and 3,000 court ladies”. https://folkency.nfm.go.kr/en/topic/detail/5467

Some scholars in linguistics claim that Korean has more adages than any other language. Four character sayings comprise a high proportion of the Korean adages. With the modern decline in usage of Hanja, Chinese characters used in Korean, knowledge of the four character sayings 사자성어 has declined so many younger subbers, while very fluent in both Korean and English, do not immediately recognize the four character sayings. Matters are further complicated with the multiple homonyms in Korean which is over 60% Chinese based. Thus, it is easy to understand, and to forgive, a subber’s confusion of 전화 which has at least five homonyms in the Naver Hanja dictionary with consequent more than five very different definitions, including phone, change, Joseon dynasty, war, and television.
In my 13 years as a volunteer at viki, I’ve encountered only one subber who was a genius at the four character sayings. Would it surprise anyone that this native speaker of Korean holds a master’s degree in Mandarin and has probably subbed into English more C-drama than K-drama?
If you are intrigued by the use of the four character sayings, the K drama where I encountered the most of them was The Salaryman. Unfortunately, viki gave up the license before we could save our subtitles.