Most of my dear friends on Viki are women

So imagine then that one day, a bunch of armed thugs told you that you are no longer allowed to read, attend school, get a job, watch your favourite Asian drama… That from now on you are nothing more than an animal of burden, the property of another. This, my dear friends, is the predicament that the girls and women of Afghanistan currently face. Can you imagine the shock? The fear? My heart breaks thinking about it.

And just because the Western world has failed miserably, it still does not change the fact that women make up half of the world’s population. They must all be protected and given rights not as women, but as human beings. 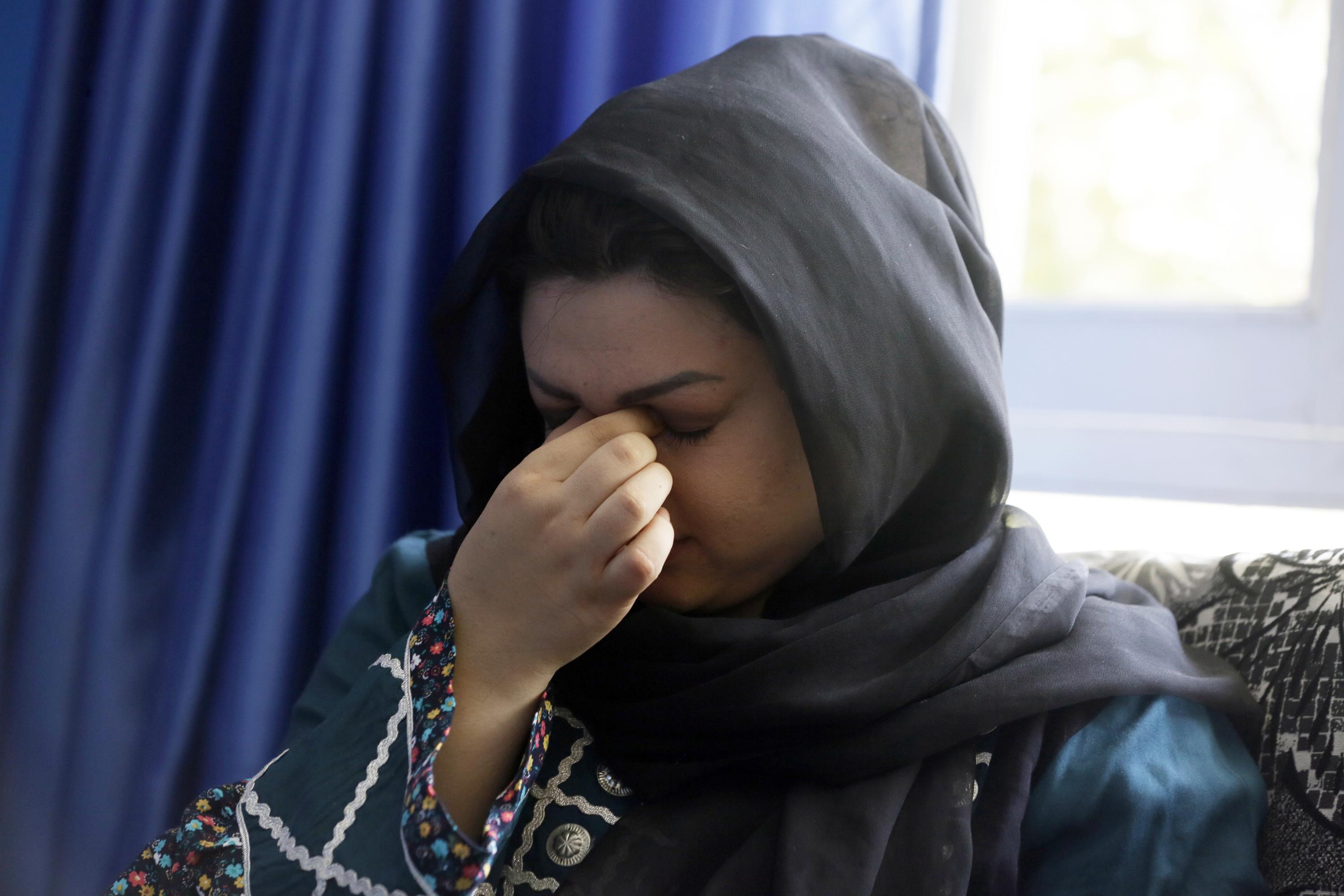 KABUL, Afghanistan (AP) — It was early evening and Zahra, her mother and three sisters were on their way to dinner at another sister's home when they saw people running and heard gunshots on the street.

@adrianmorales you can use this link for topics for us to ponder also:

@misswillowinlove Today is Friday the 13th by the calendar my culture uses. It is considered unlucky by many people. So unlucky, in fact, that many tall buildings in the United States have no 13th floor. I have always considered Friday the 13th my lucky day. Something good and unexpected has always happened to me on any Friday the 13th. … In case anyone is interested to know; in NYC the custom of not making the 13th floor is long gone ( my aunt lived in apartment 13A) . I don’t know if the …

There were too many things done wrong, it is a man- or men-made tragedy, if you like to name it that way. I can’t even talk about this matter at the moment. This is something that is hard to cope with, but unfortunately it was predictable.

My heart breaks thinking about it.

I can tell your heart breaks, every word rings true, and through to me, I believe, also to whoever reads them, I pray to God

this will be upended in Jesus Name! Jesus! I actually met a self identified African at work, just this past week! Who said to me, men are first! Women should be home cleaning the home.

Considering all the celebrated contributions women have made in the world, including the home, and every area of life!!

His declaration should have him sentenced to the life he claims for women, and hopefully produce in him a change of heart.

topics for us to ponder

that you linked both topics, in whatever ways we can, may these women be free!!

they saw people running and heard gunshots on the street.

This country is and has been always complicated, due to many groups, languages and their own ideals. Many rules now sharia likely are men’s rules… it is to us Westerners not comprehensible how this type of culture are still oppressing women of equality, women are servants.

If they haven’t reached any better living conditions “by now”, how will they now… I read the book The Breadwinner… when my kids had this as an assignment in perhaps 5th grade… and I watched Kite Runner… I believe this can and does happen…

I really don’t know what and how can be helped these poor women and children, to the West stop providing weapons. Do not support their ideals if they don’t want a better living quality for all. And take only women and children as refugees… they are the least protected. The Breadwinner, also known as Parvana, is a children's novel by Deborah Ellis, first published in 2000. As of October 2013, the English-language edition of the book has had a run of 39 editions. The title of the book refers to the role of the protagonist, 11-year-old Parvana, who is forced by circumstances to be the breadwinner for her family in a war-torn Taliban-era in Afghanistan. For her research, the author spent several months interviewing women and girls in refugee camps in Pakistan, and... The Kite Runner is the first novel by Afghan-American author Khaled Hosseini. Published in 2003 by Riverhead Books, it tells the story of Amir, a young boy from the Wazir Akbar Khan district of Kabul. The story is set against a backdrop of tumultuous events, from the fall of Afghanistan's monarchy through the Soviet military intervention, the exodus of refugees to Pakistan and the United States, and the rise of the Taliban regime. Hosseini has commented that he considers The Kite Runner to be a ...

Thank you for your kind words and prayers. I really appreciate it.

Umm… I’m not even sure what that person was talking about. He certainly had a mother, maybe a sister too, and surely he would wish more for them.

Oh, I’m sorry if my post was too much. You know me, I just can’t sit still, not when I hear of such awful things.

This news is so disheartening and heartbreaking. I don’t really know what else to say about it, but I will be praying about the situation.

It is just when the US troops went to Afghanistan about 20 years ago, I was 30. I was watching the news since then, and it is just so sad. I think one of our old chancellors Helmut Schmidt once said that even in old history, Alexander the Great has only passed by Afghanistan to continue his campaign of conquest, because he knew that there were, and today it is the same problem there are too many ethnic groups. This state was instable and now is even more. The problem with the ethnic groups doesn’t end at the border, my next fear is Pakistan and if you might remember they do have nuclear weapons. That’s why I want to stop my train of thought here …
Another thing is that I know of a German-Afghan project that might never come true now. Roger Willemsen was an author/journalist from Germany, he did once an interview with someone from the Taliban and was many times in Afghanistan because he was known that he loves education and therefor they started a project for schools for girls only and for girls and boys with poor financial background. He started a project in Kabul in a poor quarter they were building a school for boys and girls. It was finally built in summer 2020, we all know that because of Corona - there was no school they have registered around 650 kids now, but they were never able to teach them in that building. To think that now it might never happen at all, is just so …
That is why this topic is disheartening and hard to talk about.
Unfortunatly, or maybe now luckily Roger Willemsen doesn’t get to see what is happening now, he died of cancer a few years ago.
Now the project was taken over by many of his friends and popular and well know German singer Herbert Grönemeyer uses his name now to keep this project alive, but will it happen, will it still be possible?
Roger Willemsen once said:

The kids talk about alphabetization, as if it was a career.
Their hunger for knowledge is burning. The concept of their lives is full of responsibility for the development of Afghanistan.

How sad for them, that they might get taken away their chances and dreams. I don’t even want to think about what the Taliban will use this building for. Now it is an elementary school, but they were applying for it to become a high school. And it might all be water under the bridge.
This is the school not in English though, but at least you get to see the pictures.
https://www.afghanischer-frauenverein.de/safaa-schule-in-gedenken-an-roger-willemsen-in-afghanistan-ist-fertiggestellt/
and they have one page with English information.
https://www.afghanischer-frauenverein.de/en/

And so much goes wrong again

And I wish you strength, heroes, with whom no one expects, but you are always there … I wish you so much strength

Thank you, I’ll definitely look into it.

If it helped, but I’m fairly certain I wouldn’t achieve anything, and I would be just another casualty. My country has already sent hundreds of young people to support this senseless war. 29 of them have returned in a casket, never to see their families again. For a small country such as mine, it was a national tragedy. But we all believed that the United States could fix anything. It can’t, of course. Western civilisation, in general, is too complacent, too unwilling to understand that thugs like the Taliban don’t spend their time playing video games and binging Asian dramas. They’re not built like us.

Since 9/11 more service members have died not in combat, but from depression and PTS. Westerners can’t stomach seeing their buddies being gunned down by religious fanatics. The Taliban, however, feed on conflict. It makes them stronger.
No, we need to take a different approach. Violence isn’t it. They’re experts at it. 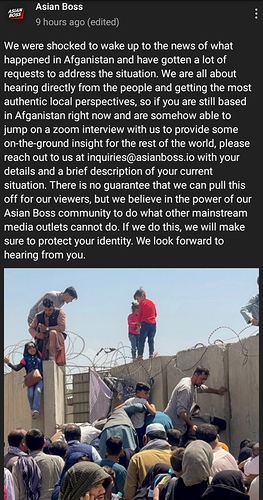 This war was never about the “human or female rights” of the local population and the country and its people were just tools by different opponents like figures in a chess game.

The USA TODAY link, allows only subscribers to USA TODAY

Community content is available under CC-BY-SA unless otherwise noted.

It was visible for free for me. At first I posted NY Times but that was paid only so I chose USA Today instead. I don’t know why it is not visible for you.