I always tried to convince her to watch dramas but she would look once, and said ‘‘not watching.’’.

She only agreed to watch Squid Game bc I practically begged her to watch with me so that we could share opinions, and she got curious bc it was all over as #1 here in US (yesterday I saw on the TV news it still #1 here).

I liked how the Director/Producer of Squid Game said: it’s so hard to find in Korea, foreigners that can speak good English. lol

PS. We both (my daughter and I) agreed on keeping the thumbs down in our rating.

Personally, I like this genre of movies. The first one I watched was Battle Royale.
I’ve watched Alice in Borderland which is different from Squid Game. In Alice, there is always a way for everyone to win.

I also loved Hunger Games and The Purge. So of course I loved Squid Game. But I must say that the ending was very disappointing.

I don’t understand why he wants to come back. How can he think he can change things when he barely survived?

If you like this genre, you can also watch The Platform or Circle (on NF).

I did see CIRCLE didn’t like that one either, and some scenes were so funny I was cracking up, although the ppl. were dying…

I really don’t want to see anymore movies/dramas like those one bc in the end, even the winner becomes the biggest looser.

Everyone that knows I watch drama is asking me about this! I have no idea if I would like it?

The first one I watched was Battle Royale.

I used to read the manga, so I watched this one a long time ago. I can’t help but see all the influences from BR in things like the Hunger Games, Squid Game, etc. I just checked the wiki of BR and I saw that they added SG to it as a - influenced by.

Something really needs to be done about restricting OTT platforms but what, really? You can physically stop people from getting into theaters, but people are faceless, body-less consumers on the Internet, with access to whatever they want. These shows make me so skeptical of even Korean dramas when they’re produced by Netflix, bypassing all of Korean TV’s strict broadcasting regulations.

The kids outside are now playing red light/green light, and those screams are really scary lol. I don’t look out the window to see bc their screams alone are traumatizing for me. Winter can’t come fast enough for me.

I just hope this won’t be something “possible” in future

I find it almost dangerous… folks might become even more desensitized…

It is as I thought it could/would be… Squid Game is too much popularized! Anyone remembers the video game Grand Theft Auto… my boys got hands on it and I had no clue but one day they played it and I watched it and was somewhat speechless at the amount of violence, the killing was like “fun” although it was in cartoon picture it does desensitize towards violence… I took the game away, but you can’t fully block it out when friends have it…

Same thing with US rap/hip pop music videos that promote certain social behavior and language… not something necessary positive or positively promoting… no wonder a lots of kids got influenced by it… why music industry just couldn’t do videos with positive messages??

Btw I recently read about a trend at schools in Europe and other countries, the chocking game… something really stupid that can lead to disability and/or death.

why music industry just couldn’t do videos with positive messages??

Life is music, and music is life. Like writing tells a story, music sings it’s story. Sad, but true. @simi11 the video making is also apart of the song’s story, the energy if you will. . .

Btw I recently read about a trend at schools in Europe and other countries, the chocking game… something really stupid that can lead to disability and/or death.

If you have NTFX they have [HONOR WALK] and I have seen many of these young kids who died while playing this choking game played ALL over the world. They show the kids hooked to all the machines, but brain dead, and their family donated their organs to save other people’s life.

I cried so much when I saw the honor walk from a 12 year old who played this game and died. His parent found him dead in his room in the morning. Why they didn’t check on that kid more often? If found on time some do survive.

The boy was called coward, and was ‘‘dared’’ to show he was ‘‘brave.’’ These bullies get to continue living and enjoying life, and I feel someone should pay for that crime, and those bullies should be in Detention Center until they turn 18; so they learn that what they did was/is a crime.

They have HONOR WALK due to accidents/sudden death and so on but what shocks me the most how many of this death are due to this choking game.

Agree with both Simi and angelight that the whole desensitization towards violence is terrible. I haven’t heard of Chocking Game or Horror Walk before, but I’ve heard of other really stupid and dangerous games/dares (cinnamon eating challenge? drinking liquid nitrogen?) that young people do and die. Whether it’s Squid Game or any other horror flicks, people should know that these are fictional dramas/movies and should NOT be imitating them in real life!

I wasn’t talking necessary about lyrics but the video making…

MINUTE 39 You will see SQUID GAMES characters/customs during Halloween in SEOUL. They took pictures too: Nice.

Squid Game at a better level.

Anxiously waiting for it! With my fave boy. LSG.

You can’t really stop people from imitating things they see and hear around them. The only thing to do is find a way to put harsher restrictions so only adults can watch certain stuff or just ban too much senseless violence. Of course, the latter will curb “freedom of expression” and stuff, so we can’t do that, either. Honestly though, how is this freedom of expression helping anyone but those who can profit off of this stuff? Lately, people seem to be doing the complete OPPOSITE of what they say they want to do. NF’s “Cuties” is a prime example. Say you’re fighting AGAINST something, and then fill the entire movie with exactly that. People who are gratified by such displays still receive gratification in the end. Say that women shouldn’t be objectified, then treat them like objects/mere bodies without feelings. “Who’s the better kisser?” “How many girls can I ‘get’ by doing so and so?” “Kissing my [best friend/girlfriend’s best friend/girlfriend’s sister/paid actor/random person picked off the sidewalk] to see my girlfriend’s reaction” and other stupid questions/situations I don’t even want to type here.
How does this make young kids watching this think? K-dramas, with all their flaws, at least got one thing right. Intimacy is an expression of love, not a conquest.

When video is brought to the privacy of homes, it opens the way to such a host of problems

And there are always crazy Youtubers who call themselves “family-friendly” and then do all sorts of nonsense, searching for insane, dangerous things to do to entertain their audiences, and these young audiences go and copy them.

@ajumma2…@frustratedwriter @feyfayer
THEY ARE GOING A BIT OBSSESED OVER THIS GAME.

WOULD YOU LIKE THIS ALARM CLOCK WAKING YOU UP IN THE MORNING? LMAO
(CLICK BELOW LINK TO VIEW HOW IT WORKS) HAHAHAHAHAHAAHAHA
https://www.instagram.com/reel/CUs8WnxpyfK/?utm_source=ig_web_copy_link 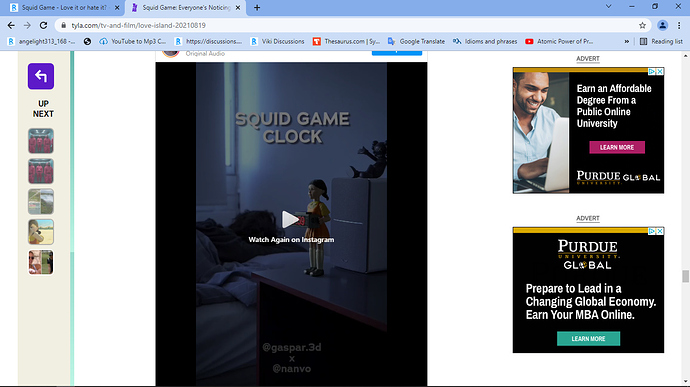 He said they don’t sell it right, but it’s just a 3D model?
I guess fans of the show would really love this.
To answer your question… that would be a no! I don’t like loud alarms