Over the years we’ve heard from many members in the community that it can be difficult to be accepted onto teams. Based on your feedback, we will be making some changes to the requirements for being a Language Moderator. We hope these changes will create more opportunities for everyone in the community!

Starting May 12th @ 7pm PDT, there will be a limit to how many Language Moderator roles contributors can take on at the same time:

Please be assured that you are still the Language Moderator for your current projects, and that no one will be removed from any of their existing projects. Contributors who are at or exceed the allowed number of moderator roles after this date will not be able to take on any additional ones until some of their projects are completed.

Read more about the updated requirements on the FAQ page here: https://support.viki.com/hc/en-us/articles/4419641244819

We understand this might create some inconvenience. However, we sincerely believe that this change will move our community into a positive and open space with more opportunities for all.

We welcome your feedback as we continue to improve the contributor experience, so do keep an eye out for a survey in approximately 1-2 weeks.

Thank you for this, Viki. I really appreciate this decision of yours.

What about the region restricted unfinished projects (for example a project that lost its licence in the middle of being translated)?

(also, is there a way to check how many projects Viki have counted as unfinished? I probably have them all right, because I list them on my profile, but just wanted to see, if everything was right)

And how about the segmenters who are added as all languages moderator in A&C projects?

Will “All Languages” Moderator roles count towards our total count?

No. Due to the flexibility of the “all languages” moderator role and how it is used in the community (e.g for cover page designers), these positions will not count towards your total count.

Thank you, I didn’t see that.

But now the following problem occurs. 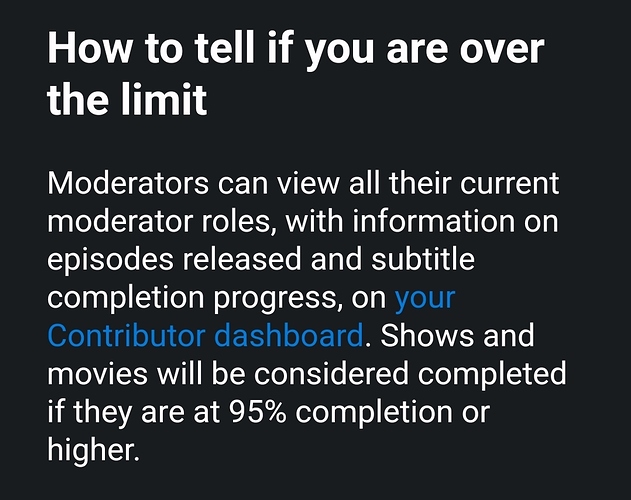 Thank you, I didn’t get this mail and… where is my Contributor Dashboard?

Hm… But it doesn’t necessary say, which projects the Viki counts as unfinished, I can just check them manually.

Maybe we will see that tomorrow when this option will be installed.

I have a project without English releases for 7 months, and contacting Viki resulted in absolutely nothing. I guess, I’m supposed to just sub it and send you a message if the CM deletes my subs as I was threatened, lol.

What about dramas that come later as a movie. So far, it has been the case that the same moderators are used so that the same subtitles are used. Does the film then remain without a moderator for that long or is one then added there as an All Language Moderator or only Editor, since the actual task of the moderator is not done there, but only the existing subtitles are added.

For this, I have noticed that the movie version arrives months after the drama. By then, on average, dramas are completed. Movies (if copy-pasting), barely take 48 hours.

These new requirements would have been welcome if you had first implemented a way to check the quality of the translations provided by all volunteers in each language.

Shouldn’t we also be talking about some English teams staying 4-5-6 months on some projects that could be completed much faster? What’s the fault of a moderator from another language, that episodes are released very rarely?

What do we do about movies that surprisingly take up to a month to be released to all languages. Of course, not all, but there have been situations where they have been released after more than a month. I mean, it’s a movie… not a 40-episode drama.

Will projects that have their release delayed be considered? I have a project that was supposed to be released last year, but it was postponed and there is no word on when it will be released. It may not be released this year either.

And finally, on what basis have you established that with these new requirements there will only be high quality contributions? Since you don’t answer tickets on quality issues…

Personally, I do not support the current form of these new requirements. Let’s see how they will change as we go along, given that you asked for feedback.

For this, I have noticed that the movie version arrives months after the drama. By then, on average, dramas are completed. Movies (if copy-pasting), barely take 48 hours.

Yes, but then I can no longer be added as a moderator because I may have already reached my number of projects.

A whole bunch of “grey” area here. To get around certain degrees of Viki, a moderator status gives us access to things that a subber or segmenter can’t do. If you are going to restrict those of us who need this access, then it’s time to revamp the entire roles within Viki.

I am moderator on one started a year ago, where we are still waiting for some episodes. I guess this is for the quality of the translations, no?

I had a 12-episode drama, 15 minutes maximum per episode. It took almost 4 months for the drama to be released in full to all languages. Seriously??? I don’t even know whether to be amused or annoyed.