What are ya'll watching

I agree. Sometimes watching a drama as it airs is part of the fun. I was watching 365: Repeat the Year while it was airing and if I hadn’t, I would never had gotten to see all the wonderful theories over mdl. It was quite enjoyable to see how everyone else thought of the drama and what their thoughts were.

Me too! I did all 8 episodes in one day bc I was so into it. Now waiting anxiously for next episode. The torturous wait lol

Now that you mention it, Yoo Seung Ho didn’t exactly look highschool age in My Strange Hero … though I enjoyed it anyway.
And now that I think about it … maybe the highschool’ers in Japanese shows look younger than those in K-dramas? Then again, maybe in J-dramas some of the adults come across as too young …

Weirdly enough it turns out that I have not seen any of the shows of your favourite actors yet!

thats one reason why I go to different dramas, just to wait for the episodes to come on or the subs as well

I just saw episode 3 of WAS IT LOVE? with SJH; she never disappoints me bc she’s a natural actress. If she wears make up, it must be invisible. She’s wearing dark color lipstick, but it looks good on her. This drama you won’t have an idea who was the guy she was with (there are so far 3 after her) and the fourth one, is starting to be getting on line, too. hahahaha. Hope u guys can check it out!

I saw parts of Ju-on; it’s Japanese based on a true story but is so painful to watch I’m taking a break bc I don’t think I can continue watching. Stateless is about a cult and ppl with mental problem suffering injustices. I will start today it’s a 6 part series ALSO based on real life event.

Here at viki just waiting they catch up with subs before I start watching some dramas I like bc I hate waiting for subs, and lately that’s a trend in many dramas here at this site.

PS. JUST finished episode 16 of the drama W THIRD time watching and I’m glad I did! I recommend you re-watch this amazing drama. It took me a while to finish all 16 episodes. Now I’m sad is over. They need to make another one as good as that one!!! 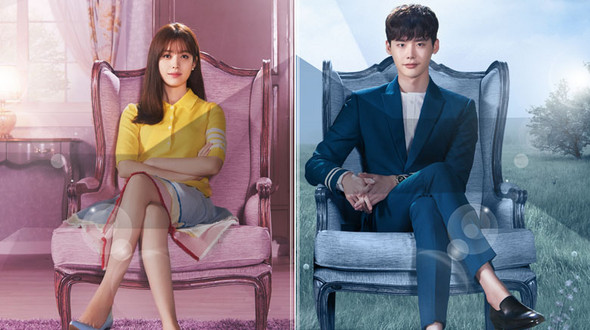 Is it possible live in the same place at the same time but in a completely different dimension? Oh Yeon Joo (Han Hyo Joo) is a second-year cardiothoracic resident doctor. Her father, a famous comic book creator, suddenly disappears one day and then...

Def. The female lead’s mad laughter is hilarious. It makes me chuckle every time it pops in my head on random occasions. 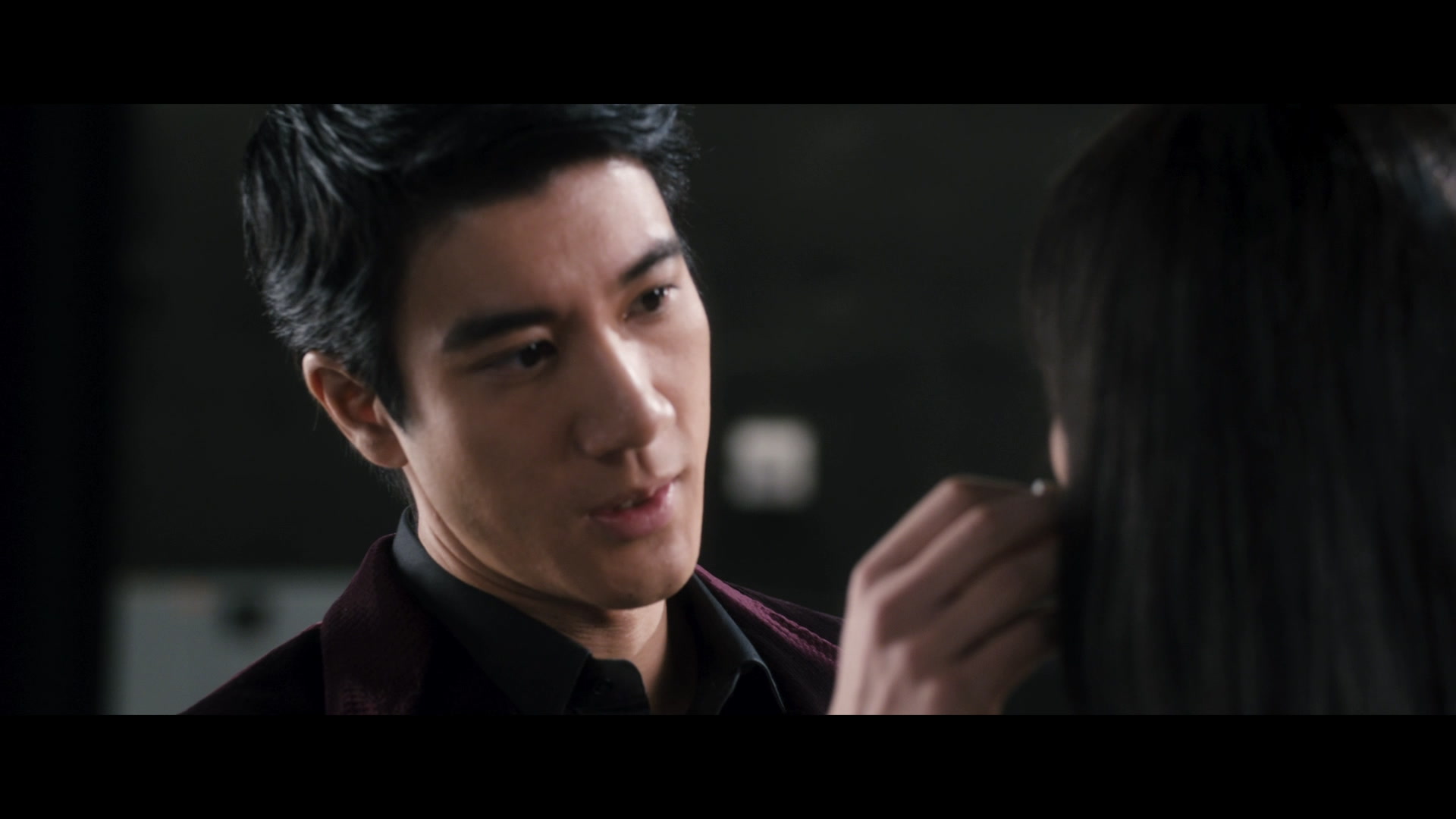 Su Fei (Zhang Zi Yi) spends her days working as a telephone booking clerk at a travel agency but by night, she’s a comic book artist who whiles the hours away, sketching the romantic adventures of her cartoon self - a dashing secret agent. Always...

I agree, W is one of my all time favorite dramas! I wish they would make a second season but I also think that the ending was good as is, and shouldn’t be added on to. Another drama like W is called Memories of Alhambra, it’s by the same screenwriter as W, but I have to admit (in my opinion) it’s not quite as good as W. I’ve re-watched W three times, and it’s just as amazing every time.

Oh gosh I lovedddd Memories of Alhambra it was everything I love in dramas. Fantasy, incredible special effects, the main guy is amazing doing his own stunts better yet, I find him so sexy and so attractive. Park Shin Hye, for the first time in my life I can say she did her best role and the kissing scenes were awesome (she’s usually terrible at kissing scenes making the guys look bad). No wonder it was such a great production if it had the same screenwriter as W (I didn’t know that).

In all honesty, I feel that MOA was as good as W. They’re different story plot so they have many uniqueness that made them both masterpiece in my eyes. I am anxiously waiting for part 2 bc it wasn’t finished, and I even PRAY they can give us part 2 very soon, and complete the HAPPY ending and closure I need. W had a happy ending, and Memories Of Alhambra; deserves a happy ending, too.

I even PRAY they can give us part 2 very soon, and complete the HAPPY ending and closure I need.

100% agree, I felt like the ending to MOA was left open! I was expecting nice closure to the drama and then it did a 180° on me and was like “haha… You thought! Sike!” it was defiantly not anything I was expecting. I hope they’ll make a part 2, it’s rare, but maybe…

They announced the second part a while back but the drama has a big budget so I’m guessing they were getting the resources money wise and now we’re facing this pandemic that STOPPED the world completely. I don’t see part 2 any time soon bc most of it was filmed in Spain and that’s completely chaotic over there.

Vagabond is on the same boat they had to continue part 2 in Morocco (where he has to take, a shot at NIS love girl) but they won’t travel abroad until things go back to normal; if it will ever go back to normal. This pandemic hit all over the world and no one is safe so, who will risk their life for a drama? None of them will bc is not worth it. We must wait and hope things can be worked out.

Unless, they learn from the Chinese that most of their dramas are computerized and it looks so beautiful and real. Here in US, they interviewed an actress and she said she will be in one room doing her scenes, and the guy in another room, and they will be put together by computers. She confessed it’s very hard to film like that but they have no other choice at this time. They are willing to work/sacrifice some, to help boost up the economy and at the same time they working on keeping their family, and themselves alive.

Wow… That’s deep… but at least there’s going to be a second season…? I just hope everyone’s okay.

I want to mention that in ‘‘American’’ shows/dramas from now on, they will be doing computerized romantic scenes. They have no other alternatives since direct contact is too risky and they won’t do it any other way. It’s official another female actress in a interview said that she will only have 2 ppl filming with her (many ppl without a job right now). She will be doing her own make up and had to take online courses for that since she was used to others doing her makeup.

The male actor explained that it will be so hard for him to get into romantic scene since there’s nothing there so they trying to work out something in that sense bc the scenes need to look s real as possible. All soaps (will begin filming this way also) They will adjust scenes so actors can keep a safe distance. their temperature will be taking frequently and testing will be done frequently. What a sad situation. Will this happen in SK too?

ON THAT NOTE
I just finished watching last episode of It’s OK not to be Okey. Fantastic ending and wonderful story that I thought would be disappointing but it’s a GEM! Please make a request for it to be here at viki! 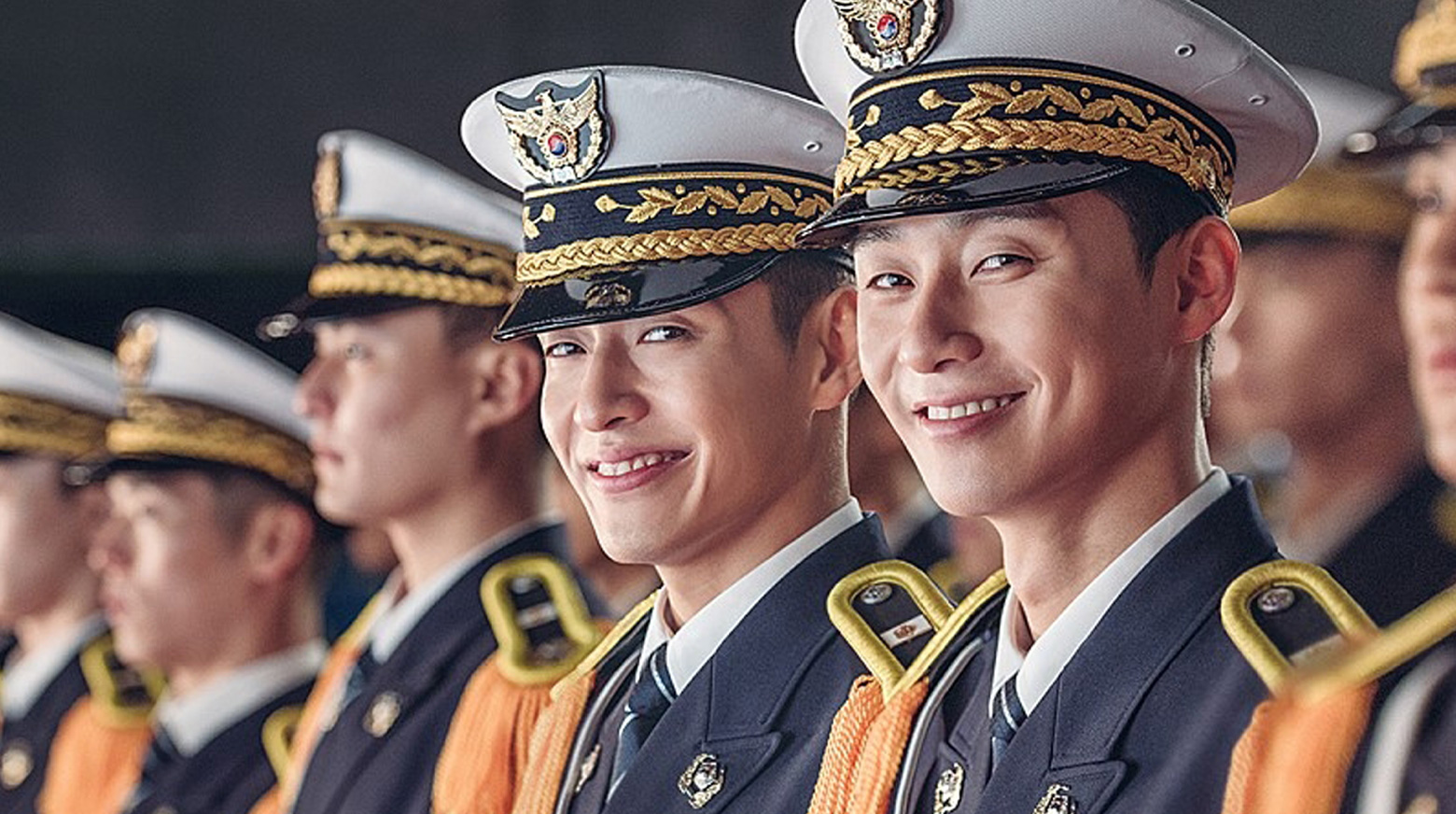 Students at the Korean National Police University, Ki Joon (Park Seo Joon) and Kee Yeol (Kang Ha Neul) have a long way to go before they become official officers of the law but that doesn’t stop them from dreaming. One their way back from a club one...

I am watching God of Lost Fantasy.

Take a look at this screenshot, is the sky right? 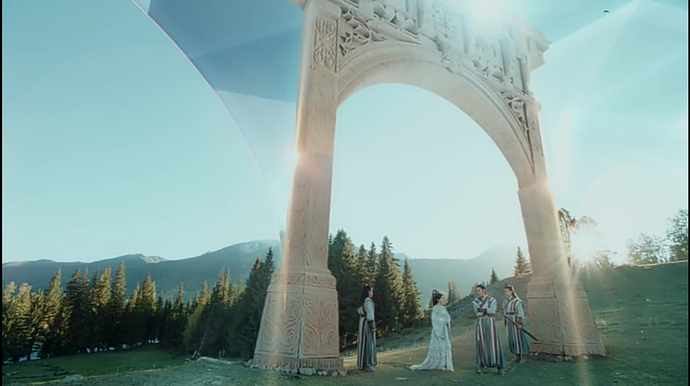 If I’m right, I’d say the green room did not do this sky shot justice. You can literally see the divides, maybe they should’ve added clouds as a cover.

Are you seeing a fault in this sky shot?

Yes! hahahahahaha that I have seen lately a lot of those computerized glitches bc in my opinion they are trying to cut the cost of this ‘‘magical scenes’’ and in the process a boo boo happens.
I have seen so many lately in Chinese dramas that is like an instinct to see it, even if I don’t want to bc I love to stay in the dreamy fantasy world, not to realize is all fake. It takes the magical momentum away sigh

SHORT FUNNY AND DIFFERENT (FOR ME) FANTASY DRAMA> PLEASE CHECK IT OUT!!! 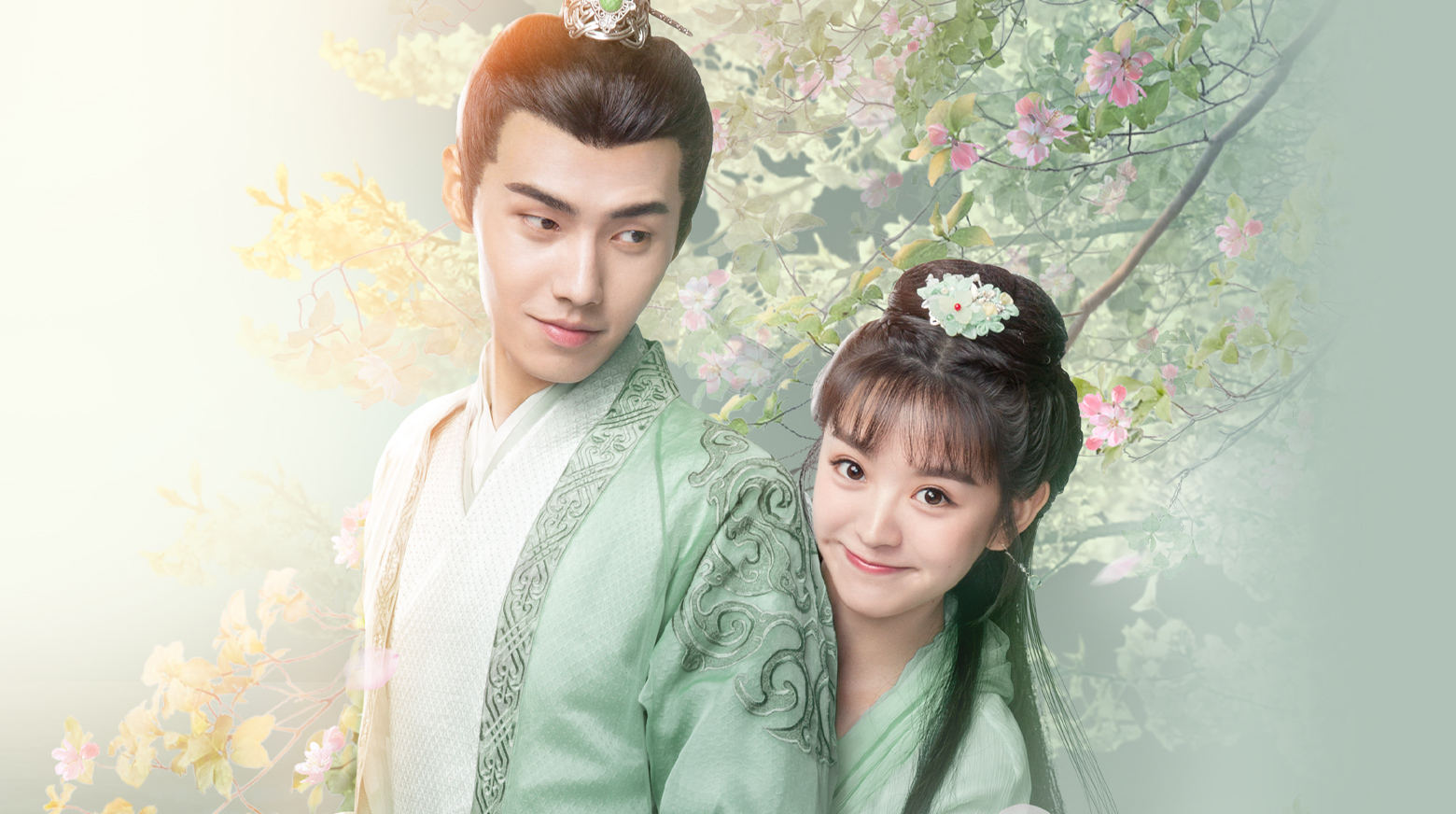 Be My Cat | Rakuten Viki

In the peaceful Qingqiu Country of Jiangzhou, on the banks of Qingshan Lake, resides Su Xiao He (Tian Xi Wei). The bubbly proprietress of a local pet shop, Xiao He is as beloved by all as the adorable animals she works with. Perfectly content with...

what is it about c-dramas…the male leads just never seem to leave a mark. And the thing that draws me to watching a c-drama is the brightness in the FL’s eyes.

Yes! hahahahahaha that I have seen lately a lot of those computerized glitches

Thanks so much for the confirmation.

And, so right you are! They do pop our bubbled world.

I have seen so many lately in Chinese dramas that is like an instinct to see it, even if I don’t want to bc I love to stay in the dreamy fantasy world, not to realize is all fake. It takes the magical momentum away sigh