The new Project Finder and the related problems

It seems we have an issue.

Ever since the new Project Finder has been open for business, the CMs have been swarmed with requests from new or newish subtitlers to translate into languages which have already been completed for all episodes. Why?

(Please correct me if I’m wrong in any aspect.)

This is something that primarily needs to be fixed by the Viki engineers working on the Project Finder.

We have to prioritise. It is by far more important that episodes are translated, rather than the extra material around a show. Hence, the new Project Finder should be changed to:

In the meantime, the CMs should not request from their moderators to translate clips and trailers of an already translated drama just because they have received multiple offers from non-team translators to translate those short videos. Instead, if the CMs are truly bothered by such requests, they should redirect the new volunteers to their moderators. This is also a good thing for the translating community in the long run as it increases team work, training level and efficiency. And hopefully this won’t have to be practised for an extensive amount of time.

I don’t see any difference between it and the old one other than the appearance. It’s quite disappointing actually.

So true! I’m totally with you! Also, I would like to add that if the project is unfinished in some particular language (not just in clips but in episodes too), volunteers who are interested to work on it should contact the moderator in charge, regardless, and get help and corrections in translation. It’s not just about project being finished, but also how it is done. For one reason or another, it seams that they all want to be moderators, even if they don’t have much experience on Viki, know the rules of community, or have a team behind them.

Weren’t there more search options on the old one?

For one reason or another, it seams that they all want to be moderators, even if they don’t have much experience on Viki, know the rules of community, or have a team behind them.

Yes, like being a moderator is such a glamorous job to begin with and anybody can do it. Some of the new volunteers don’t even know that there is a position of a subtitler. I think some might even consider that position degrading.

How can I see the new finder? I have the old video player and the old project finder.

@bozoli
Excellent suggestion. Lucidly stated and rational. I get five to ten of these useless requests everyday. About 99% of them are for series for which we have subbed the episodes in about 10 languages already. I would never decide on a subber in some other language if I know there is already an active and competent moderator in the language the requestor wants to sub in. And I am NOT going to look up the name for the requestor

It was first published here:

Site Updates: New Video Player [image] On Nov. 28, a small percentage of users may see a prompt to test a new video player design. Please note that the video player design is subject to change. If the video player test design is made available to you, we welcome you to test it and share your feedback. A survey will appear as a pop-up prompt. *The above text was updated on Nov. 22 Coming Soon [image] Project Finder is being worked on for better filters and an improved user experience! E…

I have the old video player too, but I see the new project finder.

I have people going through almost all my CM projects and send me a message for all the teasers, previews etc for those projects, so you get the messages in bulk all in one go. My inbox is spammed with them. For now I ignore it all but it’s annoying.

Maybe I should write a standard PM to everyone but then you get a response like:
“What is a PM?”
“What is a moderator?”
“What is a channel/project?”
“Can you give me a link to…?”
“Who is the moderator?”
“PMed mod 3 hours ago and doesn’t respond.”

And I don’t want my inbox spammed with those kind of replies either. And maybe it’s mean but if you cannot figure those things out yourself how do you plan to sub properly? And in other cases it’s laziness and then you wonder if a person is to lazy to check it for themselves how long will the subs take?

Ohh and I don’t like the new project finder layout, I sometimes quickly check it on my phone but the whole layout of the new design is totally messed up when I do that now.

I checked the finder myself to see what’s listed.
Saw this: 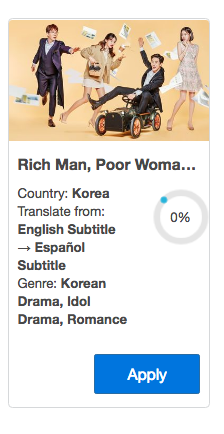 Am I missing something or is there no way to find projects for English subtitling?

is there no way to find projects for English subtitling?

It seems to be so atm.

This drama is fully subbed in Spanish, only some clips and this nice bonus episode are not yet translated. So all those rookies jump on the unsubbed clips and contact me, I’m the CM.

Usually I send them all a reply and direct them to the respective moderator and yes, I add the link, because I know for sure, that they will come back otherwise “Who is the moderator?” “How do I find them?” “How do I contact them” and I have not the time to respond them twice and more.

@somejuwels So those messages are send to you when Viki makes it looks like those will be send to the Spanish moderator instead? 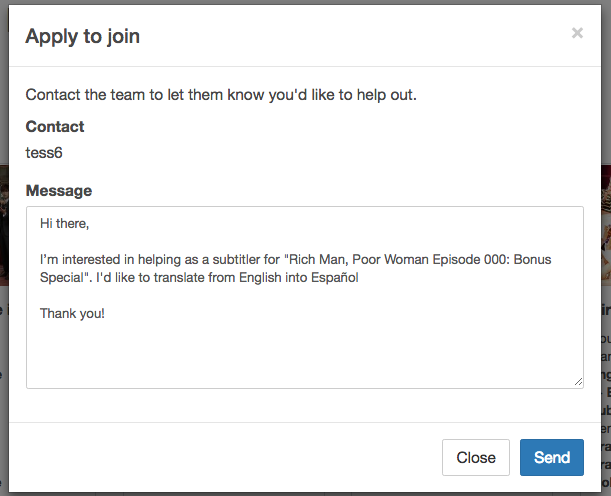 I have to test this, I only know, I’m getting almost every day messages for this bonus episode.

And Im getting messages for another channel, when the episodes are not yet translated into English.

I’m doing a test now and wrote a PM using the project finder. The odd thing is that Viki at first makes it look like it will be send to the language mods but as soon as you hit send it says something like “message successfully send to CM.”

Now waiting to see who actually got it? The CM only or also the mods?

I just received the QC newsletter a couple of hours ago and it said that messages will be sent to the moderator if there’s one, and to the CM if there’s no moderator. It also said that if there are two CMs then both will receive the message.

Do you perhaps know if the message is actually sent to the designated moderator AND not sent to the CM?

Do you perhaps know if the message is actually sent to the designated moderator AND not sent to the CM?

We can give it a try among ourselves. If someone wants to try with me, I am in. I am a moderator for a couple of stuff so if you want to try with me, go ahead.
I am sure also if you have moderator friends, they would be happy to join you in your trial.