You know, when the subbers translate English idioms literally, with hilarious results?

I’ve kept a file of the best I’ve seen in viki.

One of my favourites must be “It’s a piece of cake” (meaning it’s very easy), where two people were discussing while taking an evening walk in a small street, no pastry shops nor cakes in sight! The subber never stopped to think that speaking about a piece of cake made no sense.
Other examples which give hilarious results are:
to stand somebody up (to let him wait for you and not come), translated as making someone get up from a chair and putting him straight.
to toast (click glasses wishing for something) translated into the equivalent of grilling bread slices,
I can’t help it
But we arrested Lee In Jwa and his ring (his ring meaning his group of supporters - translated as if it were jewelry. How on earth do you arrest a ring?)
How did you get the news so quickly? - Because I am sharp-eared (can you imagine ‘sharp-eared’ translated literally in your language? She must have been thinking of Dr.Spock)
You’re pushing the envelope again. (interesting hobby here: envelope pusher. I should try it)
Did you want to blow the whistle or something?
But my very favourite must be:
Your name is Ban Poon and now you’re mine. (The person speaking was a slave-trader addressing a newly arrived slave). She translated “mine” as if it meant the underground place under a mountain where you excavate for coal or diamonds or whatever: “Now you are a mine”
I actually think that “takes the cake”

A “Blind Idiot” Translation is a translation from one language to another where the translation is overly literal, grammatically incorrect, very awkward, or clearly misses what the word or phrase was supposed to mean. If a translation is complete gibberish, it is a Translation Train Wreck. Sometimes overlaps with Gratuitous Foreign Language.

Actually “blind idiot” translation is another thing. It’s
The name is not intended to be an insult against the translator (although it works just as well that way), hence the quotation marks: “blind idiot” is a Recursive Translation of the old saying “out of sight, out of mind”. A computer in a lab was running a beta of some translation software package and translated “out of sight, out of mind”—meaning “if you hide something, sometimes people forget that it existed in the first place”—into Chinese and back to English, and the printout read “invisible idiot”, which mutated further into “blind idiot”.
So it usually means a back and forth translation English-other language-English by an unskilled person.

And here a hilarious example, where “You are such a nerd” is translated “You is such a papaya”
https://www.youtube.com/watch?v=u3G38jxyqF8&feature=youtu.be

Aaaand… A Harry Potter trailer translated from English-Japanese and then back to English. The resulting English is incredible. The Warner Brothers logo became “Brother Warner”, “Dear Mr Potter” became “Dr Mr Ceramics” and “Mr LongBottom” became “Mr Long Ass”.
Please make sure the neighbours aren’t sleeping while watching this one and be sure you’ve gone to the toilet before enjoying “Harry Ceramic”.
https://youtu.be/WsF_SIwcV_M
And Bionicle 2 Legends of Metru Nui Chinese Bootleg Subtitles
https://www.youtube.com/watch?v=mcKVCJ-zOLc

This one is a pic, not a video. From Star War The Third Gathers: Backstroke of the West (if you wonder what that is, it’s Star Wars Episode III: Revenge of the Sith) 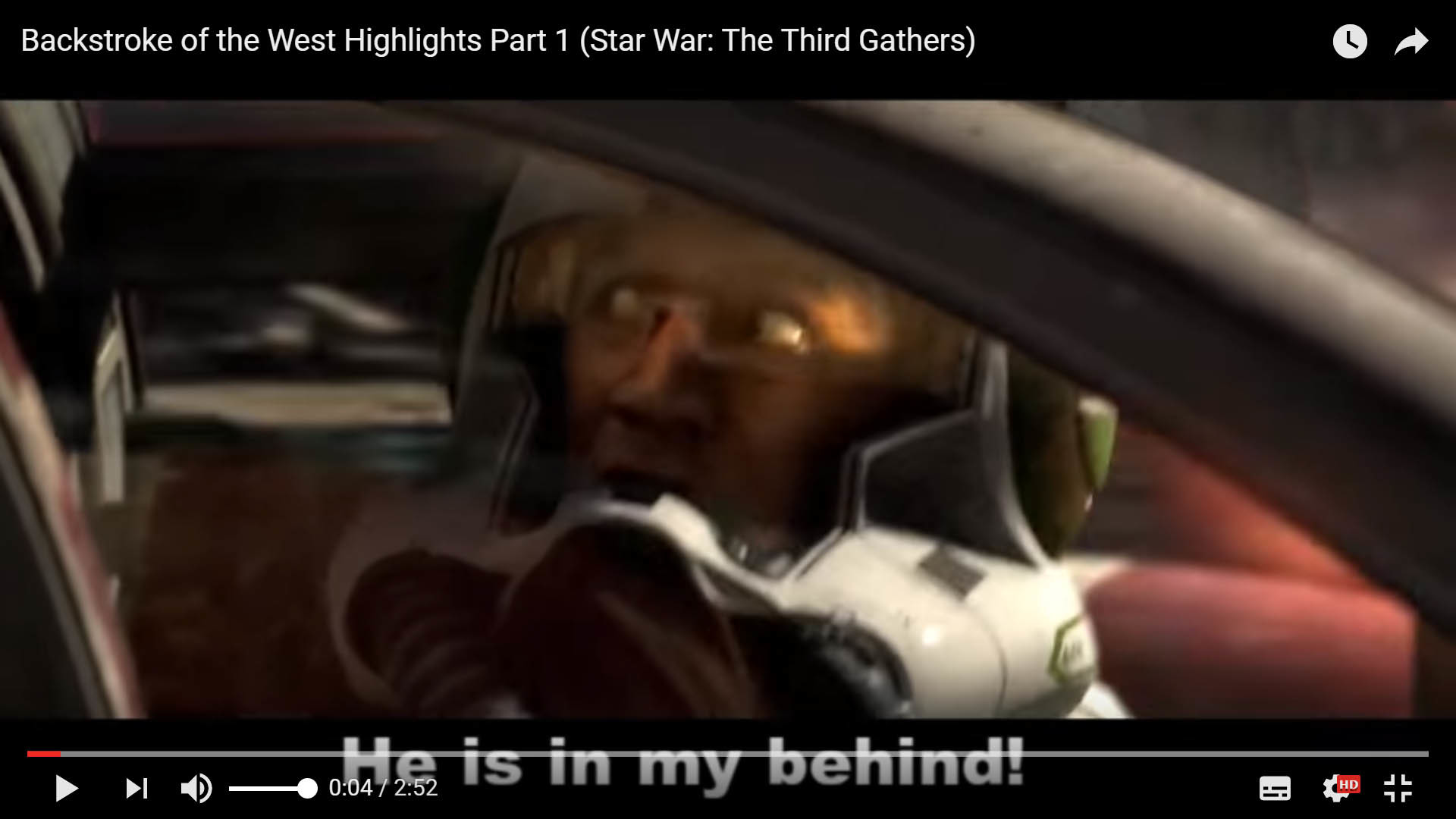 The whole movie here (it also has the normal subs below the Chinese-English ones, if you like to compare.
https://youtu.be/XziLNeFm1ok

Those things always make me laugh so hard… I once made a topic about it too here:
https://discussions.viki.com/t/mistranslations/2617

I once made a topic about it too here:

Oh that was so good! I am crying!
I see you have all sorts of things, including panels and such. All right then, let’s keep this one for subtitles only!

My favorite of the last weeks, but not for the first time either:

“Naked eyes” became a literal translation as “undressed” eyes instead of an unaided eye.

P.S. … and I remember years ago how someone was “beating around the bush” use your imagination.

“beating around the bush”

This one is a bit tricky, because we really have this german expression! To beat on the bush, which means, fishing for information. So, some subbers are confused with “beat AROUND the bush” and “beat ON the bush”.

@somejuwels
LOL as I am German too …

It’s differnt to beat around/about the bush - In German is either the short form “Um den heißen Brei reden”.
(In literal English “Trying to talk while having hot porridge in your mouth.” So close to “burning one’s tongue”, if you let the crucial information out) I think the closest English form might be “to pussyfoot around”, because there is the “cat” factor in it and in the long form it is “Wie eine Katze um den heißen Brei schleichen.” So like a cat you would go around and around and around waiting for it to cool down.

The German expression “Auf den Busch klopfen.” (lit English “To beat ON the bush”), you are right so far, but the subtitler back then wrote “Auf den Busch schlagen” and that means to either “hit” or “bash” it.
So actually he or she was beating the metapher to death.

I think, that especially younger subbers have the problem, that they don’t know those expressions. And this leads to those confusions. Like “naked eyes”

We have the german expression “bloße Füße” which means “naked feet”. “Naked eyes” would be “mit bloßem Auge” and has the meaning of “to see something without any help” But if someone doesn’t know the expression “bloße Füße”, he would also make a wrong translation of “naked eyes”. Sticking to “naked” - in english you say “the nacked truth” but in german you say “the pure truth” - die reine Wahrheit. An american friend once told me a cute story about the truth and the lie, who went swimming together. They took off their clothes and went into the water naked. The lie was done earlier and thought that the clothes of the truth are so pretty and clean. Cleaner than her own clothes. So she stole the clothes and after the truth came back, she looked for her clothes. But refuses to dress with the dirty clothes of the lie, so she came back home nacked. 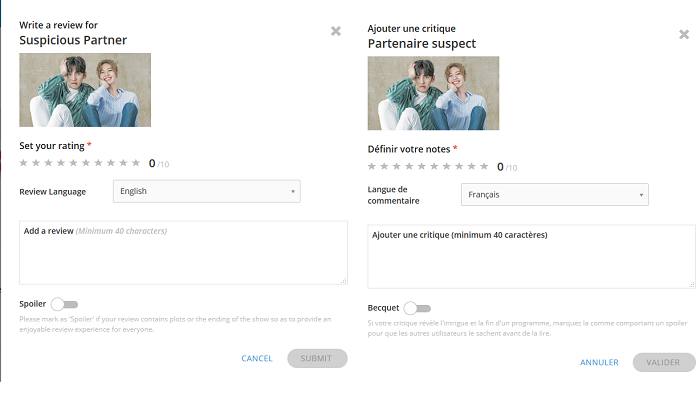 I didn’t even know what it was until I googled it. It appears that “becquet” refers to a car spoiler, it is located on the back of a vehicle and is intended to stop turbulence or drag that is created behind the vehicle.

I laughed so hard I spit out my water, thanks!

“becquet” refers to a car spoiler

It appears that “becquet” refers to a car spoiler

and the comical outcome is no wonder

This brings to mind a similar subject incident that created a similarly comical reaction in relation to (subtitle) translation. It happened during the broadcast of Kdrama sageuk ‘The Flower in Prison’ (2016). It was the translation (not here on Viki) of a scene where ‘muffler’ vs ‘scarf’ was used, and that had some (non-American/Western) viewers puzzled over the usage of the term ‘muffler’.

The scene took place on the Hexi/Gansu Corridor in Gansu province, China. I think it was in ep 21 of the 50-ep drama. Below is a googled image and the definition:
http://i.imgur.com/AqjD6YF.png

@glykeria Keep your water in your mouth

But, you can ‘salivate’ over good-looking Go Soo or Jin Se Yeon, or the sweetness of the act, or the beauty of the scenery.

It seems all the google translations here are automobile- related.

Alas, it is not merely metaphors that metaphorically are schlagen hier immer…

There is ever the tendency to throw Das Kind out with the bathwater.

bit of a blend there, as I am going to have to run back to my editing and well, if I start trying to think in German this morning completely, this may inhibit the gears shifting into hypermandarinmode.

Hey, I found a gem! It’s a Korean movie on youtube 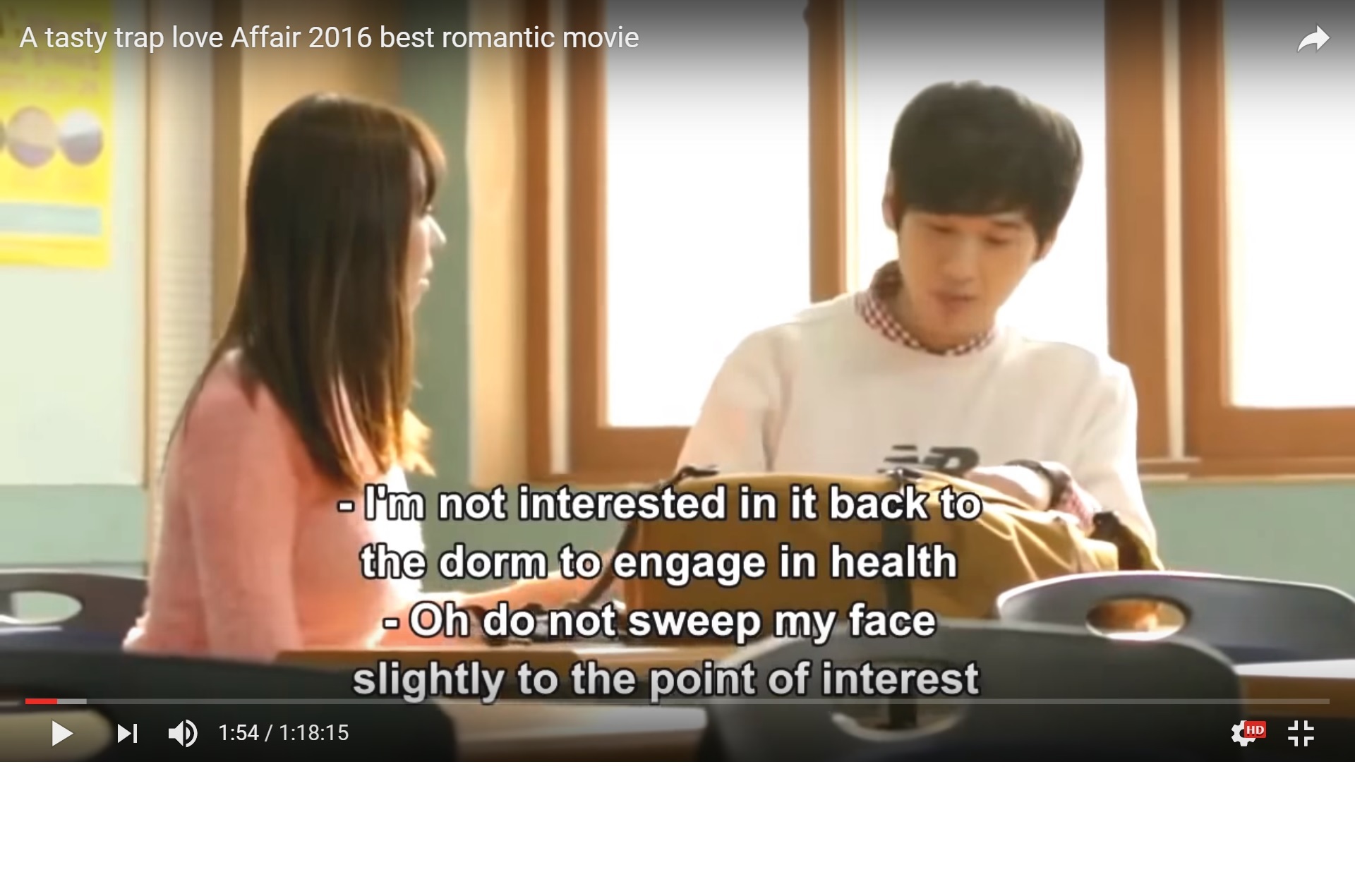 Some subbers didn’t know what “blackmailing” meant. They translated it literally into “writing black e-mails”.

That was both funny and sad.

Besides, there are some funny german sayings that sound hilarious in english.
For example “To pull someone through the hot chocolate” means like “to pull sb.'s leg” or “There have we the salad”. This means to get into a mess.

Yet, the Dutch version says: “Your scripture is hard to read, so beware.”

It may be correct Belgian Dutch though …

This is what I thought of it as a kid

They translated the English literally and in Flemish handwriting can be translated as geschrift. But voorzichtig zijn sounds strange if it’s about the handwriting.

In The Netherlands “geschrift” usually refers to some kind of ancient text, so it seemed weird. And yes, “voorzichtig zijn” sounds weird over here as well.