Hi. I would also like to be an English editor. I am a native English speaker. I don’t have experience being an editor, but I would really like to try it. I am learning Korean, but I do not know enough right now to be a translator.

I’ve been watching Kdramas for about a year now and thought I’d give back to the community since I enjoy them so much. For my education and experience in editorial work, please see https://www.linkedin.com/in/corinne-demaagd-74464049/

Hi I’m new to Viki and I would really love to help with any Chinese to English subtitles. I’m a fluent Chinese and a Native English speaker, I have been watching all types of Asian drama since I was little, while growing up in the US. I would be happy to help subtitle or be the English editor for any show.

Manganese
If you need a GE, assistant GE or backup GE, I’d love to help out. My brief bio is at
https://www.viki.com/users/manganese/about

skndv
Hi, there! Huge K-drama fan and language nerd here! I’m looking for opportunities to work on projects by doing general editing for English language subtitles. I have experience writing, proofreading, and copy editing. Please let me know if I can be of help on your team! You can find me here: https://www.viki.com/users/skndv/overview

I have not done this before, but I’d love to try if possible.
I am completely fluent in English and understand basic Korean.
I previously worked as a Hindi-English subtitler and have reached QC Trainee status.
I’m also relatively free for the next few months so I’ll be able to work quickly and respond within 12 hours.

Here is her profile page: https://www.viki.com/users/vivi_1485/overview

I want to begin being an English subtitle editor here on Viki, but I only speak English. I’ve always been a language fanatic and just want to contribute!

Hi! I’m new to the community and I would love to get involved. I’m a native English speaker who worked as a freelance copy-editor and author previously, so I would be happy to help as an editor.

I also understand some Mandarin (if that helps at all). I have a Viki standard pass currently.

Hello! I’m Izi and am interested in being a general editor for K-dramas. I have a Bachelor’s degree in English and a Master’s degree in Library and Information Science. I work professionally as an author, editor, and copyeditor. I am fluent in English, and I would love to review English subtitles and edit them to make sure they don’t come across as awkward or weird.
If there are any projects that need an editor, I would be super happy to help out!!
TIA!

Hello, whoever comes across this. I’m Sera, and I’m interested in becoming an general English editor for k-dramas and c-dramas. I just want to help out in this wonderful community, and if anyone would like my help I would absolutely be happy to see what I can do!

I’m Izi and am interested in being a general editor for K-dramas. I have a Bachelor’s degree in English and a Master’s degree in Library and Information Science.

Hello, it’s a good start to populate your profile page with some info about yourself for people who might be interested in recruiting you.
And please edit your post to include a link to your profile page.
Since you have zero experience here, your best bet is to chase after abandoned old projects nobody wants. This will enable you to learn about how to use the tools and also the English editing guidelines that we use here.

Look at my first post for useful reference tools and, after you’ve read them, start searching for projects and write to English moderators or to Channel Managers.

After an extended absence, I would like to rejoin the community as an English editor.

My biggest and most involved project was Idhu Kadhala (Is This Love) , a Tamil soap/comedy/drama. Along with editing dialogue, I managed about a dozen other volunteers for the first 400 available episodes. Additionally, I scheduled assignments, created a show-specific style guide, and corrected segmenting errors.

If you are in need of editing help in any capacity, please let me know. I’d be delighted to assist.

Thank you for adding my post here. I really appreciate it!

Hi, there! Huge K-drama fan and language nerd here! I’m looking for opportunities to work on projects by doing general editing for English language subtitles. I have experience writing, proofreading, and copy editing. Please let me know if I can be of help on your team!

I recently rejoined the Viki community, though I’ve loved this platform for years, and am now hoping to contribute to the hard work of the great subbing teams! You can find me here: https://www.viki.com/users/skndv/overview

Thank you so much for sharing! It means a lot!

Casey, your profile page cannot be found. Did you change your username?

Hi! I’d like to help editing english subs where needed, of course. Obviously, I know that I can still improve, so experiencing it, I could also learn from experts many things. So yeah, let me know if I could help somewhere. Have a good day/night!

Hey there! I would like to offer my help as either a general or chief editor. I am a native English speaker that has taught English in Japan and in Australia. I went to high school in Japan and also lived and worked there but I’m reluctant to call myself fluent. I’m a big fan of k-dramas and several I have watched recently have quite distracting English errors. It would be wonderful to contribute.

I am a native English speaker that has taught English

Who vs. That - The Blue Book of Grammar and Punctuation

In a recent newsletter, I corrected myself after some readers wrote in saying the word that should have been who in the sentence “There’s not one mother I know that would allow her child to cross that street alone.” However, it got me thinking more...

I know this sounds rude, and I’m sorry about that, but if you’re offering yourself as an English editor, everything you write should be carefully checked…

I don’t get offended easily. Your comment is not rude at all. Writing in a hurry and editing are two very different undertakings. This was me writing in a hurry, which is no reflection on my editing ability. I can, however, understand how you may have made that conclusion.

Welcome to the Discussion Boards, @theheasmans_341

I love grammar! This is a very interesting topic.

I’m also a native English speaker and like @theheasmans_341, my version of English is Australian. In my country, “who” and “that” are both used when referring to people. While “who” is more common, “that” is perfectly acceptable (e.g. “Is he the one that drives a red car?”). This is probably because both relative pronouns are usually used to introduce defining relative clauses (unlike the relative pronoun “which” that is used to introduce non-defining relative clauses). The article that @irmar posted also supports the use of “that” for people. By the way, this is an excellent article. Thank you for the link, Irmar. I wasn’t aware of this website before. It’s a great reference location. I’ve bookmarked it.

In Australia, we mostly use British English. That said, a great deal of American English also floats around. Because of this, when I GE, I’m often double-checking myself with the Merriam-Webster [American] dictionary and Grammarly.com to make sure that I’m using American English for Viki. Here’s a little bit on “that” from Merriam-Webster.

the person, thing, or idea indicated, mentioned, or understood from the situation; the time, action, or event specified; the kind or thing specified as follows… See the full definition

Personally, I completely agree with the article given by @irmar. I use “who” for individual people and “that” for teams of people (although sometimes “who”). An exception to this is something like, “That person is the principal.” This is similar to the example given in the Merriam-Webster dictionary.

I never use “who” for things. From my school days, “who” only ever refers to people. The one exception that I can think of is where “who” might be used for a pet that the owners regard as “part of the family.” That is, the pet becomes personified. My mother was a great one for personifying pets. For example, she would talk about our “free-ranging white cockatoo who used to disappear for a week or two and then return to live with us for a while.” His name was “Cocky” and he was more a sibling than a pet

I treat such a use of “who” as informal language unless it’s used to amplify personification in literature. 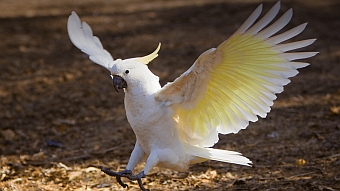 This is just my 2 cents worth.

In Australia, we mostly use British English. That said, a great deal of American English also floats around.

I was also brought up with British English but here on Viki unfortunately we have to use AE because that’s where most of the subbers come from (usually Korean immigrants to the US). It’s a nuisance, but what can one do? The important thing is to be consistent.

I quite like the challenge that using American English (AE) brings! While I don’t have your substantial experience @irmar, which means I’m probably much more likely to get caught out from time to time, I like learning new things.

One thing that amuses me regarding AE is that in Australia, we used to use -ize endings (e.g. organize, realize, etc.). This changed around the 1980s to -ise. I was never aware of the reason but I’m guessing that it had something to do with the ease of typing S instead of Z. Surprisingly, this has ended up helping me with this particular aspect of AE here on Viki since I went through my entire school-life and early adulthood using what we now call AE.

Things like whisky/whiskey, forwards/forward, two storey building/two story building, liquorice/licorice—just to name a few of many—can still catch me out if I’m not careful. Fortunately, the Subtitle Editor is tuned to AE and this helps greatly. The editing notes of @worthyromance are also a very valuable asset.

By the way, thanks again for the link to the “Blue Book of Grammar.” I was looking through it last night. It’s an outstanding site